Trump steps back, done with being 'daily voice' of coronavirus response 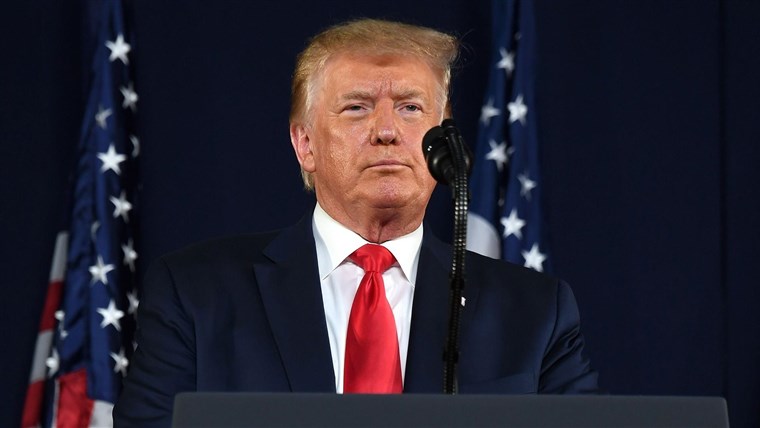 WASHINGTON — As the country is hit with record numbers of coronavirus cases, some states are halting their reopenings, and hospitals in hot spots are becoming overwhelmed, President Donald Trump has largely stayed in a place you don’t often find him: the sidelines.

The president’s lower profile is by design, a senior administration official said.

The latest hope among top aides is that by keeping Trump distanced from the day-to-day, the administration can depoliticize the virus response, the official said. Trump’s comments on everything from masks to taking an experimental drug have ignited controversy and have drawn him into battles with Democrats and public health experts. One outside adviser said he has cautioned for months that there is only a downside in having Trump as the public face of the response.

The president made only a few passing references to the surging number of cases this week, saying during a speech on the economy that there are “some areas where we’re putting out the flames or the fires and that’s working out well.” In an interview with Fox Business Network on Wednesday, Trump said of the virus, “I think that at some point that’s going to sort of just disappear, I hope.”

Instead, the president focused most of his firepower on defending monuments and military bases honoring Confederate leaders, promoting the economy, making unsubstantiated allegations over mail-in voting and attacking the media. During a speech at Mount Rushmore on Friday, he attacked people who want to remove Confederate, patriarchal and colonial monuments as a threat to the country’s existence, only briefly mentioning the virus that has killed more than 129,000 Americans.

Behind the scenes, Trump has also taken a mostly hands-off approach. He is briefed at least once daily on the number of cases and latest efforts on a vaccine and treatment, but he hasn’t been attending the coronavirus task force meetings, traveling to the most affected states or strongly urging Americans to change their behavior.

Trump will probably give an update to the country on where things stand with the pandemic next week, but “he isn’t going to be the daily voice on this,” the senior administration official said. In his place, the White House is sending Vice President Mike Pence on the road to meet with governors and take questions from reporters, while Dr. Deborah Birx, the White House’s coronavirus response coordinator, and Health and Human Services Secretary Alex Azar do more media interviews.

It’s a stark contrast from the approach taken by past presidents, who used times of crisis to present themselves as commanders-in-chief leading the country through disaster, like Presidents George W. Bush after the Sept. 11 attacks and Barack Obama during the financial crisis.

Trump’s attempt to take center stage as cases surged in April backfired and led to sinking poll numbers as his freewheeling coronavirus press briefings spiraled off topic and turned into jousting sessions with reporters. After a briefing where he mused from the White House podium about whether bleach could be injected into the body to kill the virus, advisers said they were able to convince him to curtail the events.

Despite efforts by aides to highlight his response, including sending Trump to tour plants making protective equipment and ventilators, just 38 percent of Americans said they approve of his handling of the crisis while 58 percent disapprove, according to a New York Times/Siena College poll released June 24. And Joe Biden has begun to step up his attacks on the president’s handling of the pandemic.

As the administration resumed coronavirus press briefings this week amid the spike in new infections, it moved the events out of the White House to make them appear less political and prevent Trump from making a cameo, officials said.

Now the administration is back to where it initially was in March, with Pence taking the lead in public and behind the scenes.

As Pence traveled Sunday to Texas to meet with the state’s governor about the staggering number of cases there, Trump stayed in Washington, making a trip to his Virginia golf course. Pence traveled Wednesday to Arizona, where the state reported a record number of infections and deaths, while Trump had no public events that day. On Thursday, Pence was in Florida urging younger residents to step up precautions as Trump gave a speech to business leaders in Washington, touching on the coronavirus to blame China for the pandemic and tout treatments.

“The president is in a ‘darned if he does, darned if he doesn’t’ position here. No matter what he says, it will be politicized,” said Seth Denson, president of GDP Advisors, who has been working with health care companies responding to the pandemic. “He’s in a no-win situation. Better to put those out there that seem to be more specific to the issue at hand.”

Shannon Pettypiece is the senior White House reporter for NBCNews.com.