Like many Long Islanders, Southold resident Millicent Persson and her husband Walter scoured the internet in recent weeks in an effort to book appointments to get the COVID-19 vaccination.

A CVS pharmacy locater said vaccinations were available at one of their stores — in Waterford, Connecticut.

So Persson, 74, a retired Greenport teacher, and her husband, 73, a retired Carpenter, drove to Orient, took the ferry across the Long Island Sound to New London, Connecticut, grabbed a cab and went to that CVS.

Only, it turned out, to be turned away because they weren’t Connecticut state residents.

And, it seems, the Perssons weren’t alone.

Just a short time earlier, officials said, a group of 10 Long Islanders had arrived at the store seeking vaccinations, only to have employees call police to the scene to help turn them away.

“Basically,” Millie Persson said Friday, “we were turned away without any recourse. It’s very frustrating.”

Waterford Police Lieut. Tim Silva confirmed the police response to the CVS store Thursday, but said his officers were there simply to maintain order.

“We understand tensions are high with these vaccine situations,” he said, but added there were no arrests and referred all additional inquiries regarding the situation to both CVS and the Connecticut Department of Health.

In an email response Friday, a CVS spokesman said: “We follow all current state eligibility requirements to receive a COVID-19 vaccine. When registering customers are asked to attest to those guidelines in order to receive the vaccine.”

Connecticut state officials have said those eligible to receive shots must be at least 75 years old, or be a health care worker or medical first-responder who faces risk of exposure to COVID-19. Other eligible recipients include long-term care facility staff members and residents. Above all, Gov. Ned Lamont said in a Thursday news conference, recipients must live in Connecticut.

It appears, Persson told Newsday, the pharmacy store locating system failed to take that into account, but rather just listed the closest stores. By mileage.

In her case, she said, that was by mileage across the Sound.

“That’s what led us up to Connecticut,” she said. “What happened was the CVS website asks ‘What is your ZIP code’ and so we entered our ZIP code and then it asked, ‘What is your age group’ and we entered our age group. Their site actually sent us to Waterford … It really is the site’s fault and the way they handled it was really poorly done, I think.

“There was just some poor girl [employee] who had no idea why any of us were there and had no idea other than to tell us we couldn’t be vaccinated.”

Persson said the whole misadventure cost her and her husband more than $120, including cab fare and tickets for the ferry, as well as a day wasted.

“Thankfully, it [the Sound] was very calm, because I don’t travel well,” she said, saying she and her husband are so concerned about COVID that they didn’t dare get brunch on the ferry, because, as she said, “I didn’t want to touch anything.”

On Friday, Persson said she and her husband would again try to find an appointment to get their vaccinations.

Only this time, she said, she’ll make sure she looks only on Long Island.

John Valenti, a reporter at Newsday since 1981, has been honored nationally by the Associated Press and Society of the Silurians for investigative, enterprise and breaking news reporting, as well as column writing, and is the author of “Swee’pea,” a book about former New York playground basketball star Lloyd Daniels. Valenti is featured in the Emmy Award-winning ESPN 30-for-30 film “Big Shot.” 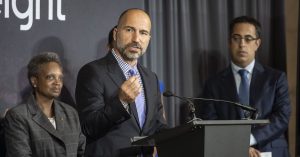