How 9 governors are handling the next coronavirus wave 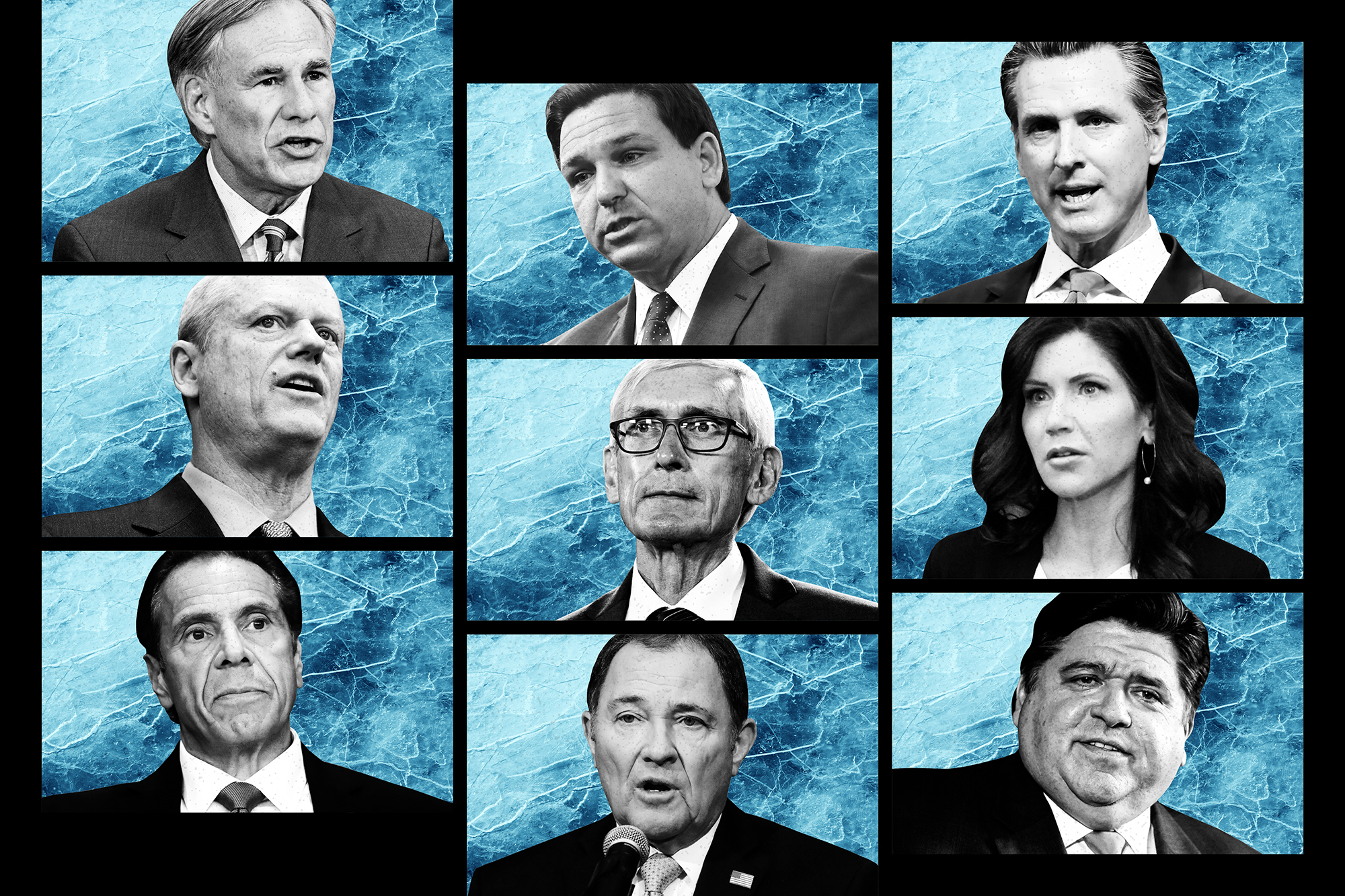 President Donald Trump hasn’t been leading on the coronavirus
and governors are again in charge of the nation’s response.
They’re reacting with a patchwork policy that’s unlikely to
head off the long-warned “dark winter” in America.

Governors are balancing rising case numbers and pressure to keep
schools, restaurants and bars at least partially open. They’re
employing loosely defined “curfews” on all but essential
workers, admonishments over holding Thanksgiving dinners and
reductions in capacity limits on indoor spaces — and a
growing number of Republicans are mandating masks.

What they’re not doing: Returning to the all-or-nothing
approach of the pandemic’s earliest month, sparing a
disease-weary public another round of lockdowns.

“Governors are being very, very careful. They’re being
surgical in some of their requirements,” said Wisconsin Gov. Tony
Evers, a Democrat who has battled Republicans over his containment
efforts, in an interview. “The big ones are making sure people
wear masks and facial coverings. I think they’re doing a good
job.”

Here’s a look at how nine governors — from across the
country and from across the political spectrum — are responding
to what experts fear may become the deadliest coronavirus surge yet
in the U.S.

How bad is the pandemic? How South Dakota is fighting the virus

She refused lockdowns in the spring, and allowed the massive
Sturgis Motorcycle Rally to proceed this summer — an event since
linked to
hundreds of cases across the region. As the virus surged in the
state this fall, Noem didn’t implement restrictions and declined
to urge state residents to even wear masks, let alone enact a
mandate.

“I’ve consistently said that people that want to wear masks
should wear masks and people who don’t shouldn’t be shamed because
they choose not to,” Noem said at a press conference last
week.

Her office defended her pandemic response in a statement.

“Look at Minnesota, Wisconsin, and Illinois – states that
have had mask mandates for months but are still seeing rapidly
increasing cases,” wrote Ian Fury, a Noem spokesperson, in an
email. “Since the start of the pandemic, Governor Noem has
focused on solutions that do good, not solutions that feel
good.”

How bad is the pandemic? How Illinois is fighting the virus

So Pritzker divided the state into 11 regions and now gauges the
need for mitigation based on each region’s hospital bed
availability and positivity rates. Lawsuits have since ensued, but
they’ve been shot down by the courts.

In the second wave, bars and restaurants have closed for indoor
dining, retail stores must adhere to new capacity limits —
grocery stores at 50 percent and big-box stores at 25 percent.
Museums, movie theaters and casinos are closed, too.

The mask mandate remains, and Pritzker says the state is one
step away from an order to stay at home.

How bad is the pandemic?

How Massachusetts is fighting the virus
Massachusetts has had a mask requirement in place since the spring,
but Baker issued a stricter order in November requiring residents
wear face masks at all times in public.

“We are in the midst of a surge in cases,” Baker said during
a recent press conference. “There is community transmission
across the commonwealth. And we are standing up at least one field
hospital to treat a crush of ill patients.”

Baker recently imposed a 9:30 p.m. curfew for indoor dining and
social gatherings, and asked residents to be in their own homes by
10 p.m., though some state lawmakers and advocates are calling on
Baker to halt indoor dining completely.

The biggest fight playing out in Massachusetts is how to handle
schools as cases increase. The Baker administration has stressed
the importance of keeping schools open in person, and points to
data that shows the virus is not spreading rapidly at schools. The
in-person school push has put Baker at odds with local officials
and powerful teachers unions.

Reopening plans are up to local school committees in the
state’s 351 cities and towns, and many have opened for
remote-only learning or a hybrid model with limited in-person
attendance.

How bad is the pandemic? How Wisconsin is fighting the virus

The state Supreme Court sided with lawmakers who said they
should have had a say in whether to extend Evers’ initial
stay-at-home order. The decision resulted in the state opening up
again, and coronavirus cases skyrocketing.

The governor has declared a public health emergency in the
state, requiring face coverings in public. That too is being
challenged by conservatives.

Local health departments, including those of big cities like
Milwaukee and Madison, have reduced the capacities of restaurants
and other businesses. And some school districts have closed
in-person high school attendance. The state is also encouraging —
not ordering — residents to stay home.

But Evers says he wants to do more.

“Republican opposition is no question the biggest
challenge,” he said. “They’ve taken the Trump mantra to a
whole new level. When you’re against mitigation and against any
effort to prevent the virus from spreading and requiring that,
that’s a problem. And we’ve been fighting that for months and
that’s one of the reasons we are in the predicament we
are.”

How bad is the pandemic? How Texas is fighting the virus

Now, despite the rapid rise in cases, Abbott has resisted calls
to tighten capacity limits and shut down businesses, and he’s
even tied the hands of local officials who are trying to curb the
virus spread through renewed measures. The state sued El Paso
County over an order closing businesses. An appeals court sided
with Texas and overturned the order.

“It is important for everybody in the state to know that
statewide we’re not gonna have another shutdown,” Abbott said
during a news conference last week. “There’s an overestimation of
exactly what a shutdown will achieve, and there’s a
misunderstanding about what a shutdown will not achieve.”

Abbott has sent aid to El Paso including equipment, medical
staff and National Guard troops. And the mask mandate remains in
place for most of the state’s 254 counties.

How bad is the pandemic? How New York is fighting the virus

Cuomo is also
utilizing a “micro-cluster” strategy, an approach where the
state responds to outbreaks in specific neighborhoods. That has
meant new restrictions — including some limits on in-person
learning and high-risk, nonessential businesses — additional
testing,
contact tracing and compliance enforcement on communities and
ZIP codes where Covid-19 is surging.

Gareth Rhodes, the deputy superintendent and special counsel at
the state Department of Financial Services and a member of the
governor’s Covid-19 task force, said the micro-cluster strategy
has been effective in controlling the viral spread in hot spot
areas and helped prevent another statewide shutdown.

“When there’s evidence that there is broad-based community
spread happening and the trend is going in the wrong direction,
that’s when we implement the cluster,” Rhodes said. “It
serves as a wake-up call to communities that, unless additional
actions are taken by the community, there will be further
restrictions coming.”

The state has ramped up its testing and contact tracing efforts
to better understand how and where Covid-19 is being transmitted.
Rich Azzopardi, a senior advisor to Cuomo, said “the big
difference between March and April and now is we just know so much
more” about how the virus spreads.

“It’s like the fog of war has lifted and you can now see the
field,” he said.

Despite focusing on a micro-cluster approach, Cuomo has yet to
take the possibility of another statewide shutdown off the
table.

“Everything is based on the numbers,” Rhodes said. “We
monitor the numbers every single day. there’s no one metric
that’s determinative — we look at a series of metrics.”

How bad is the pandemic How Florida is fighting the virus

In May, DeSantis began allowing businesses to reopen, largely in
sync with recommendations from the White House, and hasn’t looked
back since. He’s even had second thoughts about his original
lockdown order.

“Now we know those types of shutdowns didn’t really do
anything,” DeSantis said in September. “Actually, it looks like
they were more harm than good.”

DeSantis has lifted nearly all of the restrictions he had
imposed, allowing all businesses to remain open and declining to
issue a mandate to wear face masks. The state has blocked dozens of
local governments that have issued mask requirements from
collecting fines.

DeSantis has pushed aggressively to keep schools open, making it
all but impossible for districts to decide on their own to shut
down. And the governor is now focusing his efforts on the elderly
and medically vulnerable, who are the most likely to die from
Covid-19. In a roundtable discussion this fall with university
health experts — an event that drew shoutouts of encouragement
from Trump — DeSantis pointed to state testing data that showed
that most young people recovered from the virus without medical
attention.

Florida now is awaiting the arrival of Covid-19 vaccines, and
DeSantis believes some of the state’s hospitals and long-term
care facilities could
start seeing doses in the next three to six weeks. He has shown
no signs of moving back toward a lockdown.

How bad is the pandemic? How California is fighting the virus

dramatically pull back on reopenings, but to issue
a statewide curfew beginning Saturday that requires residents
to stay in their homes between 10 p.m. through 5 a.m. unless
performing essential activities. The curfew will be in place
through Dec. 21.

Newsom also pulled the “emergency brake,” placing the
majority of the state — 94 percent of the state’s population
— into the most restrictive level of the state’s four-tiered,
color-coded reopening structure. That has meant the end of indoor
dining for most of the state, along with prohibitions on indoor
operations for gyms, museums and religious services.

The governor, who has had a rough week after news broke that he

attended a maskless birthday gathering at a three-star Michelin
restaurant in the Napa Valley and
whose kids were exposed to the coronavirus, said the time to
take action to curb the virus’ spread is now, and called on all
Californians to comply with the state guidelines.

“This is simply the fastest increase California has seen since
the beginning of the pandemic,” Newsom said of the state’s
rapidly rising case count at a press conference last
week.

Since then, it’s only gotten worse.

How bad is the pandemic? How Utah is fighting the virus

The statewide mask mandate, which is expected to remain in place
for the foreseeable future, came over a month after the Utah
Medical Association implored him to adopt the requirement. The
governor had first used a local approach to masks, letting
jurisdictions set their own rules and then, in mid-October, rolled
out a new mandated mask system depending on the level of infection
in an area.

But in the past few weeks, “the strain on our hospitals has
dramatically increased,” according to Anna Lehnardt, a
spokesperson for Herbert.

“The governor’s decision to extend a mask mandate to the
entire state was closely tied to his declaration of new state of
emergency to address hospital overcrowding,” Lehnardt said in an
email. 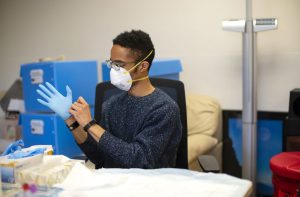 Contact tracing in Illinois may not slow the coronavirus much. But the data is helping guide state decisions.