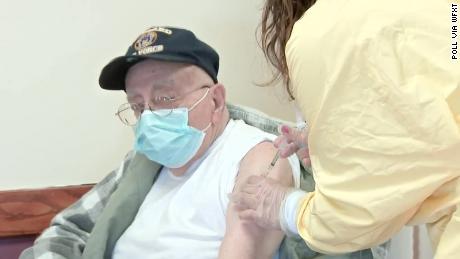 Health care workers at the Holyoke Soldiers’ Home gave its first shot to Robert Aucoin, a 78-year-old Air Force veteran, according to a statement from the Massachusetts Executive Office of Health and Human Services (EOHHS). Aucoin, who served from 1961 to 1965 as the control tower operator at Pope Air Force Base in North Carolina, has lived at the Holyoke veterans’ home since April 2018.
With a blue Snoopy mask over his nose, mouth and part of his long white beard, he was administered a shot at the Holyoke home through a federal Long Term Care pharmacy partnership program with CVS and Walgreens.
“I am very happy about getting the vaccine. My wish is that everyone in the world can get the vaccine,” he said in a statement.
Another Soldiers’ Home in Chelsea, Massachusetts, administered its first vaccine to Dominic Pitella, a 94-year-old who has been a resident there since April 2018. Pitella, a US Army Air Corps corporal, was a cook with the 559th Air Service Group and served in the Pacific theater in World War II, according to the EOHHS.
“I’m hopeful this will help everybody,” said Pitella.
Gov. Charlie Baker praised the vaccinations in a hopeful statement of better things to come.
“Administering vaccines to our frontline health care workers and now some of our most vulnerable residents in the Soldiers’ Home provides relief and hope that there are brighter days ahead for all,” he said in a statement.
“We are pleased to start providing the first dose to the incredible men and women living in both the Holyoke and Chelsea facilities to offer more protection from Covid-19, and remain grateful to the dedicated staff who are working tirelessly to keep our veterans safe and healthy during the pandemic.”
The vaccinations are a return to the setting of one of the worst coronavirus outbreaks in the spring. At least 94 veterans died, including at least 76 who tested positive for Covid-19, at the nursing home in Holyoke, about 90 miles west of Boston, leading to state and federal investigations and charges against two home supervisors.

The state’s 174-page investigation on the outbreak described a series of errors the home made, including delays in testing, delays in closing common spaces, insufficient personal protective equipment and a general lack of compassion for veterans. 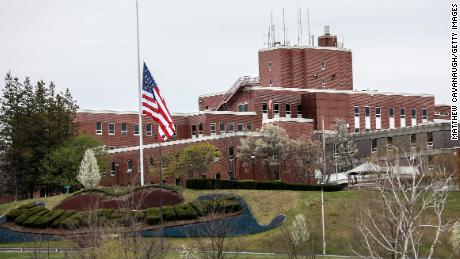 The most significant error came on March 27, when leadership decided to move two units of veterans into one, combining some who had tested positive for Covid-19 with those who showed no signs of it. According to staff and union accounts shared with CNN, the home dealt with systemic issues such as short staffing for years.
A grand jury indicted two officials in the home in September “for causing or permitting serious bodily injury or neglect of an elder during the Covid-19 outbreak,” Massachusetts Attorney General Maura Healey said.
Former superintendent Bennett Walsh, 50, and former medical director David Clinton, 71, each face 10 criminal counts. They pleaded not guilty to the charges in November, according to CNN affiliate WCVB.
The CDC has recommended that frontline health care workers and those in nursing homes be the first to receive the coronavirus vaccines, which have shown to be effective in limiting serious Covid-19 illness. About 60% of US coronavirus deaths have been among people older than 75, according to the CDC. 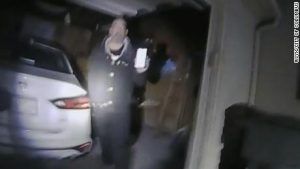 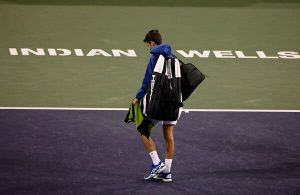 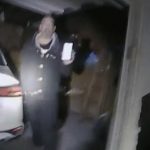 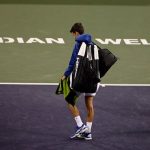 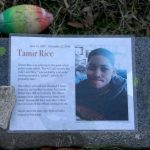 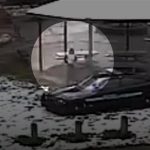 No federal charges for officers in 2014 fatal shooting of Tamir Rice, DOJ says