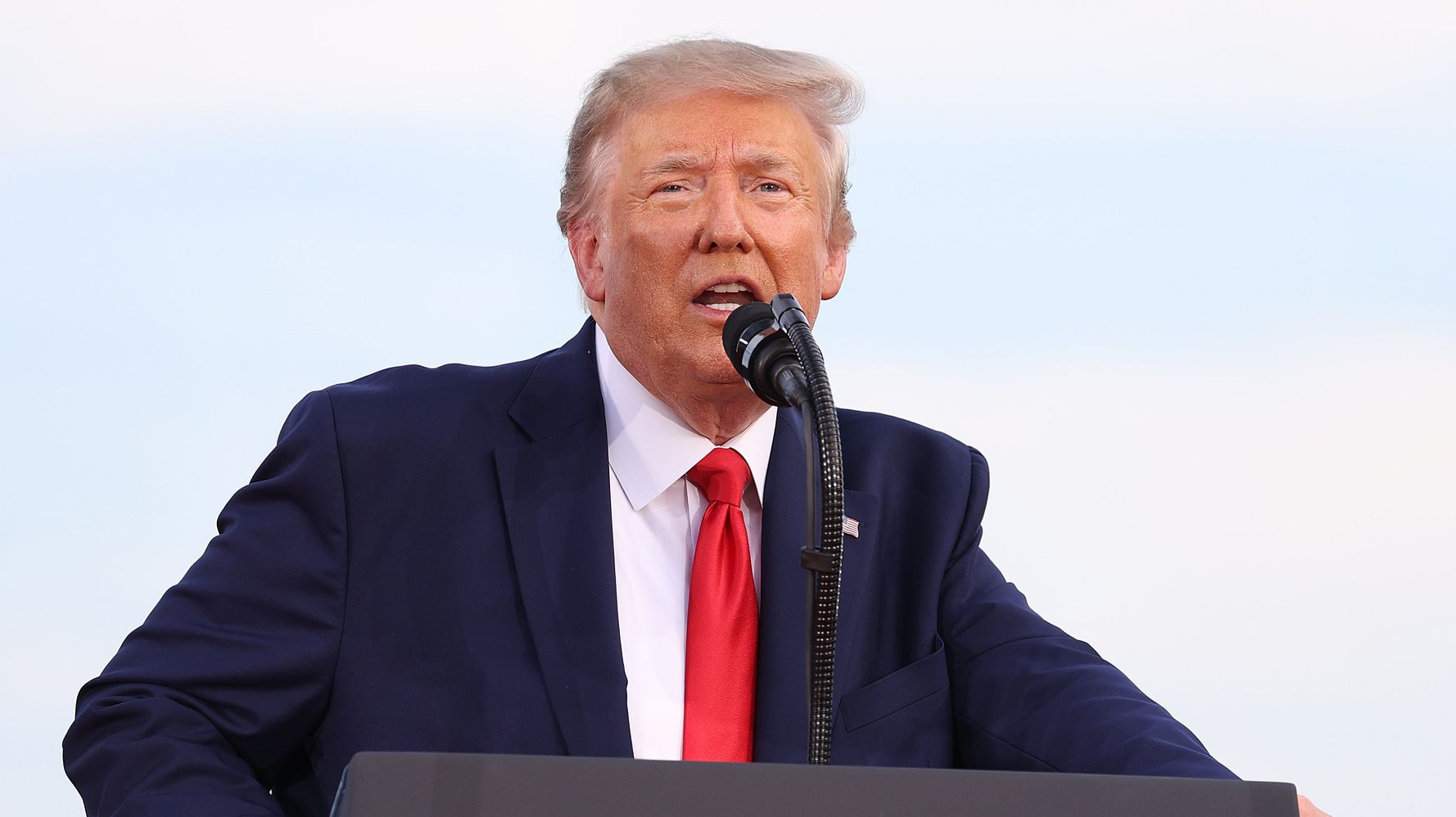 Trump, who did not wear a mask despite evidence that facial coverings can help to mitigate the spread of the coronavirus, blamed China and its “secrecy, deceptions and cover-up” for the global spread of COVID-19.

China must be held “fully accountable,” he said, adding without evidence that the U.S. would have a treatment or a vaccine for the virus “long before the end of the year.”

Trump added that the U.S. has tested nearly 40 million people for COVID-19. This effort “showcases, 99% of which are totally harmless,” he claimed without evidence.

The U.S. reported more than 2.8 million coronavirus cases and almost 130,000 deaths to date. That’s a fatality rate of about 4%.

People actually applaud after Trump mentions that “we got hit by the virus that came from China” pic.twitter.com/uXhSwsd4Ke

Tens of thousands of people were expected to attend the Washington event. Few appeared to be wearing masks.

Trump administration officials said they’d give out 300,000 face coverings to attendees of the celebration. The Associated Press reported, however, that there was no indication that masks or social distancing was mandatory.

The large gathering came as global cases of the coronavirus surpassed 11 million and as a majority of U.S. states grappled with a surge in infections.

“You should avoid whenever possible gathering in crowds where people cannot maintain physical distance,” Dr. Anthony Fauci, the nation’s top infectious disease expert, said earlier this week. “Avoid crowds, wear a mask, keep physical distance. It doesn’t matter what the reason for the congregation, whether it’s a celebration here, the demonstration there. It doesn’t make any difference — wear a mask.”

On Friday, Kimberly Guilfoyle, one of Trump’s top campaign officials and the girlfriend of his eldest son, Donald Trump Jr., reportedly tested positive for the coronavirus. She’s at least the third person close to Trump who has been diagnosed with the disease in recent months.

Guilfoyle was tested in South Dakota, where she’d traveled to attend an early Independence Day celebration held at South Dakota’s Mount Rushmore National Memorial. Trump officials said she didn’t have any contact with the president’s entourage.

Trump, who was again sans mask, addressed a cheering crowd at Mount Rushmore before a massive fireworks display concluded the event. Fireworks were banned at the site since 2009 over concerns of wildfires and other environmental effects ― but Trump pushed for the pyrotechnics extravaganza.

In his Friday speech, Trump ranted against the “left-wing mob” and “far-left fascism” — a reference to protesters who, as part of a national uprising for racial justice, have vandalized and removed Confederate monuments and symbols.

“Angry mobs are trying to tear down statues of our founders … and unleash a wave of violent crime in our cities,” he said.

On the National Mall as part of a celebration of American independence, Trump reiterated his inflammatory rhetoric.

“We are now in the process of defeating the radical left, the Marxists, the anarchists, the agitators, the looters and people who in many instances have absolutely no clue what they are doing,” he said.

He lambasted protesters for “lying about our history.”

″[They] want us to be ashamed of who we are, [they’re] not interested in justice or healing. Their goal is demolition,” he said.

Trump also dug into the media, whom he described as condemning “patriotic citizens.”

“The more you lie, the more you slander, …. the more we will work hard to tell the truth, and we will win,” he said of the press.

Trump’s July 4 message to the nation: “We are now in the process of defeating the radical left, the Marxists, the anarchists, the agitators, the looters, and people who in many instances have absolutely no clue what they are doing.” pic.twitter.com/zh7wPYmT3z

Trump also touted a sculpture garden that he hopes to establish, dubbed the “National Garden of American Heroes.”

The garden will pay tribute to some of the most prominent figures in U.S. history, including Betsy Ross, Jackie Robinson, Susan B. Anthony, Daniel Boone, Davy Crockett, Frederick Douglass and ultra-conservative Supreme Court Justice Antonin Scalia.

It will be “a vast outdoor park that will feature statues of the greatest Americans who ever lived, … great men and great women, people that we can look up to forever,” Trump said.