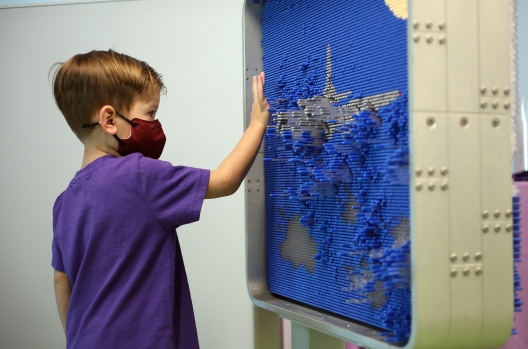 Anyone who’s flown with young kids knows it can be a heavy lift to keep them entertained before boarding. Some parents resort to screens, others pull out games and some just let the kids stare out the windows at the arriving and departing jets.

Mineta San Jose International Airport turned to Children’s Discovery Museum to give parents another option: Zoom Zone, a 600 square-foot educational play space aimed at toddlers and younger kids that opened Wednesday between Gates 24 and 25 in Terminal B.

This isn’t the airport’s first foray into a kid-friendly area — there was the tech-centered iPal Playground with its creepy robots a few years back — but having the Children’s Discovery Museum involved gave the Zoom Zone a huge advantage right out of the gate.

“This is what we do,” Children’s Discovery Museum Executive Director Marilee Jennings said. “And aviation and flight are irresistible topics. We all know what it’s like traveling with kids.”

With its entrance decorated in the museum’s signature purple, the Zoom Zone will satisfy kids’ interest in things that fly — whether it’s a bird, a butterfly or an airplane. Children can make a Monarch butterfly’s wings flap, climb all over a bird’s outstretched wings, or take the controls of a biplane. The “Alphabet Plane” has a series of windows that matches up letters with place names to teach kids about cities around the United States (Detroit, Reno and New York) and the world (Guadalajara, Tokyo, and London).

When the window shades are pulled up, they’ll uncover an artist image representing that place created by six artists the museum commissioned: Khamron Brooks, Saskia Krafft, Tiffany Lin, Frances Marin Lopez, Lyssa Park and Harumo Sato. Even if you’re not flying, you can see the art and learn more about the artists at www.cdm.org/zoom-zone.

The Children’s Discovery Museum also imported a version of the Pin Screen, one of its most popular features, which lets kids push on plastic pins to create their own art — at least until another kid comes along and makes art of their own.

It was all designed at the Children’s Discovery Museum’s fabrication shop attached to its downtown San Jose home. “There’s no cookie-cutter approach for us,” Jennings said. “Every exhibit is one-of-a-kind and that includes the Zoom Zone.”

Jennings thought Zoom, which is based in downtown San Jose, would be a perfect sponsor for the area, and the video communications company provided a $240,000 gift for the project. In all, the project received more than $1.2 million in free or discounted services from the airport, general contractor Hensel Phelps and 15 subcontractors.

FAMOUS FACES: The East Side Education Foundation will induct its newest Hall of Fame class on Nov. 13 at an in-person event at Hayes Mansion in San Jose.

“We are incredibly lucky to have so many wonderful alums from East Side schools whose stories can inspire current students to success in their education and professional journeys,” said Dan Moser, a retired East Side Union superintendent and president of the East Side Education Foundation.

You can get more information or purchase tickets at www.eastside-fund.org/hof_dinner.

NEW PIECE, NEW PLACE: On Oct. 30, the San Jose Chamber Orchestra will open its 30th anniversary season by hosting the Northern California premiere of John Christopher Wineglass’s work, “Alone Together,” a response to many of the social issues we’ve all faced during the pandemic. And you might remember this is a piece that was commissioned by the San Jose Chamber Orchestra, along with the Fresno Philharmonic, the Pacific Symphony and the Monterey Symphony, where Wineglass is composer-in-residence.

The concert, “Of Time and Place,” will be held in person at St. Francis Episcopal Church on Pine Avenue in Willow Glen, a new venue for the Chamber Orchestra and other local performing arts groups. Tickets must be purchased in advance at sjco.org or by calling 408-295-4416, and proof of vaccination will be required.

“The flexible purposing of this space could not come at a better time for us,” said San Jose Chamber Orchestra Music Director Barbara Day Turner. “It is beautiful, inviting and in a lovely part of town near lots of great places to eat, it has comfortable and movable seating, great sound, and excellent keyboards are available when needed.” 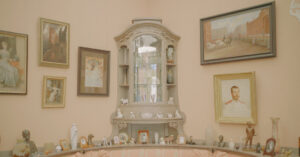