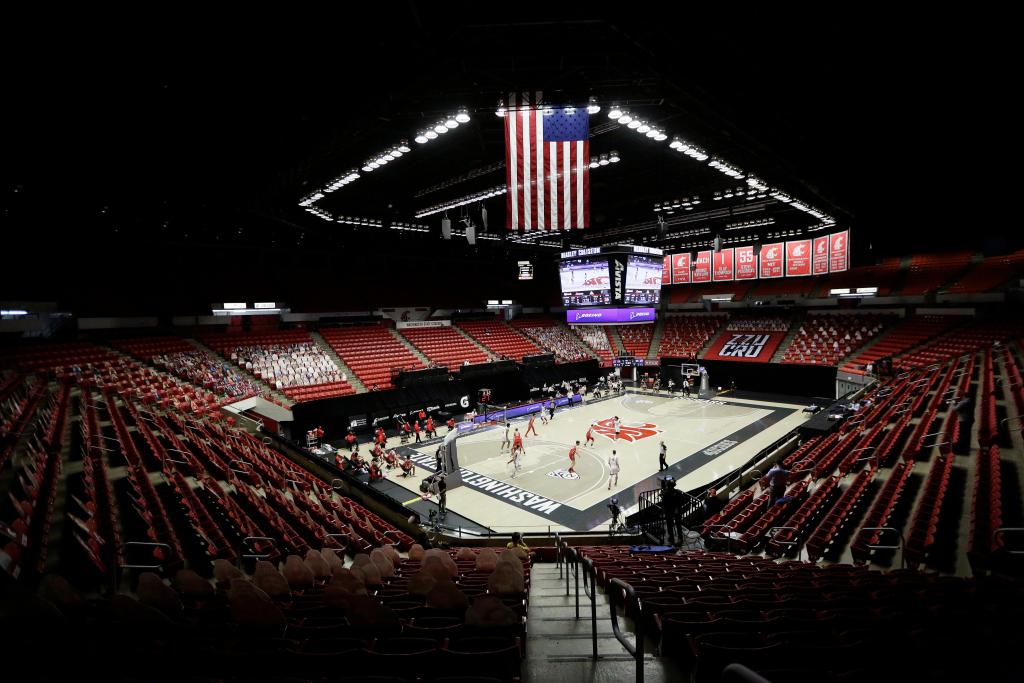 ANN ARBOR, Mich. — Playing college sports during the pandemic has potentially become more problematic as more contagious variants of the coronavirus start to show up across the U.S., including one that prompted the University of Michigan to shut down its athletics department for two weeks.

It was not clear this week how many athletic departments are testing for the mutations, either. A number of schools that responded to The Associated Press said they were, but others are not as the basketball season creeps toward tournament time and dozens of schools ramp up spring football plans.

The Wolverines put all their programs on pause Jan. 23 after the variant was linked to several people within the athletic department.

“Obviously, Michigan going on pause with the variant is of concern,” Wisconsin basketball coach Greg Gard said. “That’s obviously something that everybody’s watching really closely to see what the impact of that, along with the normal strain, has as we continue to walk forward.”

Cancellations, postponements and millions in lost revenue have hit sports worldwide over the past year and the blow fell particularly hard on U.S. colleges, where some seasons were canceled outright or pushed to winter or spring in hopes the pandemic would ease. More than 100 major college football games were disrupted last fall, but that number pales in comparison to the sheer volume of schedule shuffling for college basketball.

Since the season began Nov 25, more than 700 men’s basketball games have been postponed, rearranged or simply called off, according to an AP analysis through Friday’s games, and the news was similar for women’s teams. A handful of women’s programs ended their seasons altogether after giving it a try, including Canisius earlier this week.

Still, most schools have pressed ahead, and the hope is to hold league tournaments just ahead of the NCAA’s popular March Madness tourneys that begin in mid-March.

Athletic departments have been testing their athletes for months. But less than 1% of positive specimens in the U.S. overall are being sequenced to determine whether they have worrisome mutations, which include a variant first identified in Britain that was the one discovered at Michigan. The British variant is more contagious and is believed to more deadly than the original, while one from South Africa may render vaccines somewhat less effective.

“Most people think if the same thing happens here that happened in the U.K, we’ll see sometime between March and April that this could the dominant strain here,” said Dr. John Swartzberg, an infectious diseases and vaccinology expert at the University of California and a member of the Pac-12’s COVID-19 medical advisory committee.

The NCAA responded to an interview request by referring to a statement it released last month in which it said the “emergence of variant strains compels us to be even more vigilant regarding infection risk mitigation and testing.”

Most Power Five conferences referred questions to their individual schools, where the responses varied when asked if sequencing was being done to look for variants: In the Pac-12, for example, Washington and California said they were while Colorado and Stanford said they were not.

A similar mix was found in the Big Ten. Dr. Cameron Wolfe, an infectious disease specialist at Duke and chairman of the ACC medical advisory group, said “a couple campuses” were starting to test for the variant.

The research lab doing the testing at Cal is among the minority in terms of testing for the variant, Swartzberg said, echoing broader concerns about the lack of an organized national approach.

“The large university medical centers are doing it, but there’s no uniform plan,” he said. “There’s no funding for it, per se, at this point.”

The University of Michigan and the Michigan Department of Health and Human Services have been conducting genomic surveillance for months but sequencing was ramped up in early January as British variant data emerged.

Emily Martin, who leads Michigan’s campus testing program, said there was a brand of PCR test that shows a unique pattern for the British variant that “doesn’t work perfectly, but it can work as an initial screen.”

“We use this as a first pass while we wait for sequencing results to come back,” she said. “However, it doesn’t work for the other variants we are watching for like the one that has been circulating in Brazil.”

“Technically, the only way you’re really going to be able to find out if you have a variant is by full genetic sequencing,” said Scott Miscovich, the SEC’s contracted medical director for the league’s COVID-19 testing program. He said the SECs 14 schools were doing what Michigan is doing.

A more transmissible virus raises the specter of more positive tests, more quarantines and more disruptions for college sports. The economic blow of losing the NCAA Tournaments a year ago was in the hundreds of millions and the hope is to hold both tourneys this year in single locations to minimize travel and possible explore. The men’s tournament will be in and around Indianapolis and the women’s tourney will be in and near San Antonio.

“I think you can play sports if you do the right things,” said Wolfe, the Duke doctor. “I think that’s much harder to do at the moment. Will there be more cancellations over the next month or two? Absolutely.”

College administrators and coaches have done all they can to encourage students to make good choices when they’re away from sports facilities. The emergence of the variants is a new warning and it comes not long after most students returned to their campuses after the holidays.

“I think it’s a good wake-up call for us just to say, `Hey, we’re not out of the woods yet,’” Wisconsin men’s hockey coach Tony Granato said. “I think sometimes you get a false sense of security. ”