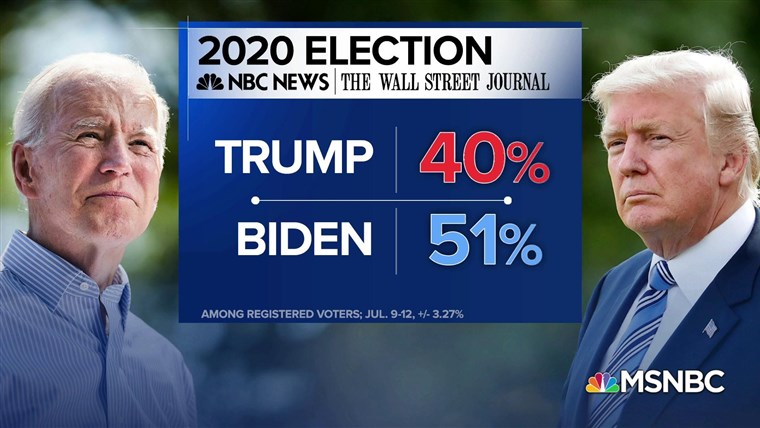 WASHINGTON — Presumptive Democratic presidential nominee Joe Biden holds a double-digit lead nationally over President Donald Trump, with 7 in 10 voters saying the country is on the wrong track, and majorities disapproving of the president’s handling of the coronavirus and race relations.

Those are the major findings of a new national NBC News/Wall Street Journal poll that comes three and a half months before the 2020 presidential election, amid a pandemic that has killed approximately 140,000 Americans, and during protests and debate over race across the country.

The poll shows Biden ahead of Trump by 11 points among registered voters, 51 percent to 40 percent, which is well outside the poll’s margin of error of plus or minus 3.3 percentage points.

In addition, the poll shows Democrats enjoying an intensity advantage heading into November, and it has Trump’s job rating declining to 42 percent — its lowest level in two years.

“The atmosphere and the attitudes toward Donald Trump are the most challenging an incumbent president has faced since Jimmy Carter in 1980 and Lyndon Johnson in 1968,” said Democratic pollster Peter Hart, whose firm conducted the survey with Republican pollster Bill McInturff of Public Opinion Strategies.

But the survey also finds silver linings for Trump and the GOP, as well as warning signs for Biden and the Democrats: A majority of voters approve of the president’s handling of the economy; Biden’s personal ratings have dropped since last month; and Democrats no longer hold a double-digit lead in congressional preference.

“As Americans are coping with the coronavirus and a reckoning on race, politically, there is a great deal of sorting going on,” added Democratic pollster Jeff Horwitt of Hart Research Associates. “We are a long ways away from knowing how this will all play out in voters’ minds.”

What’s more, half of voters — 50 percent — say there is no chance at all they would vote for Trump (compared with 37 percent who say the same of Biden).

And in a separate question, a majority — 52 percent — say they would be “very uncomfortable” voting for Trump (compared with 38 percent who say that of Biden).

While more respondents say they’re enthusiastic about voting for Trump (23 percent of all voters) than Biden (14 percent), the poll finds that Democratic voters are slightly more interested in November’s election than Republicans are.

That’s the highest level on this NBC News/WSJ question since October 2012.

Yet by party, 80 percent of Democratic voters express high interest, versus 74 percent for Republicans.

“Both parties are going to have very high turnout,” McInturff, the GOP pollster, says of these numbers.

The NBC News/WSJ poll also shows a whopping 72 percent of American voters believe that the country is headed on the wrong track — a 16-point jump on this question since March.

Just 19 percent think the nation is headed in the right direction, which is the lowest mark on this question since July 2016, exactly four years ago during the last presidential election.

That’s compared with 56 percent of who disapprove of the president, including 50 percent of all voters who do so strongly.

Just 37 percent approve of Trump’s handling of the coronavirus, which is down 6 points from last month.

And only 33 percent approve of his handling of race relations.

But 54 percent of voters say they approve of Trump’s handling of the economy — his highest mark on this question since becoming president.

Trump’s standing on the economy isn’t the only potential warning sign in the poll for Joe Biden and the Democrats, however.

In addition, the Democrats’ lead in congressional preference has declined from 11 points in June’s NBC News/WSJ poll (51 percent to 40 percent), to 4 points now (47 percent to 43 percent).

Finally, when it comes to the coronavirus, 74 percent of voters say they always wear a mask when shopping, working or being around others outside the home.

That’s an increase from last month, when 63 percent said they always wear a mask — with much of the movement coming from Republican and male respondents.

“This isn’t even a fair fight,” said Hart, the Democratic pollster.

The NBC News/Wall Street Journal poll was conducted July 9-12 of 900 registered voters — more than half of whom were contacted by cellphone — and it has an overall margin of error of plus-minus 3.3 percentage points.