The Bank of America has acknowledged it secretly turned over to federal investigators the private financial information of customers who made purchases in and around Washington, D.C., at the time of the Jan. 6 riot at the Capitol.

The bank, the nation’s second largest, identified a total of 211 customers who met certain “thresholds of interest” in the probe, according to an investigation by Fox News’ Tucker Carlson reported Thursday. The feds, he said, were looking for people who used a bank card for hotel stays, meals and transportation.

Responding to a request for comment, Bank of America insisted it was acting in compliance with the law.

Carlson noted there’s been “an enormous amount of talk in the last month about violent extremism and the dangerous people who’ve embraced it.”

The talk is nonstop on cable news but also comes from elected officials, leaders of federal law enforcement, intelligence agencies and the Pentagon.

This week, the new defense secretary, Lloyd Austin, ordered the U.S. military to “stand down” in an effort to rid the ranks of “racists and extremists.”

Carlson, arguing that to root out a problem you have to know what it is, pointed out that none “of these newly energized and highly empowered extremist-hunters had told us what exactly what an extremist is.”

Should Bank of America have given private info to the FBI for Capitol-riot probes?

“We’re left to guess, looking around nervously to see if we can spot one, and hoping against hope the whole time they’re not talking about us,” he said.

Carlson charged that Bank of America is effectively acting as an intelligence agency without informing its customers, treating them like they are members of al-Qaida.

After the Jan. 6 riot, he said, the bank rooted through the private records of Americans who had committed no crime but fit a certain profile.

1) Customers confirmed as transacting, either through bank account debit card or credit card, purchases in Washington, D.C. between January 5 and January 6.

2) Purchases made for Hotels, AirBnB, RSVPs in Washington, Virginia or Maryland after January 6.

3) Any purchase of weapons or at a weapons-related merchant between January 7 and their upcoming suspected stay in D.C. area around Inauguration Day.

Carlson noted the profie is “remarkably broad — any purchases of anything in the city of Washington, D.C. Any overnight stay anywhere in a three-state area, spanning hundreds of miles. Any purchase, not simply of legal firearms, but instead anything bought from a quote, ‘weapons-related merchant,’ T-shirts included. And then, any ‘airline related purchases.’ To anywhere. To Omaha, or Thailand.”

Bank of America identified a total of 211 customers who met these “thresholds of interest.” Federal investigators then interviewed at least one of the unsuspecting customers, Carlson said, noting the person ultimately was cleared.

“Imagine if you were that person,” he said. “The FBI hauls you in for questioning in a terror investigation, not because you’ve done anything suspicious. You haven’t. You brought plane tickers and visited your country’s capital. You thought you could do that. You thought it was your country.”

Effectively, he said, “you’re being treated like a member of al-Qaida.”

Did the bank have a choice?

Carlson disputed Bank of American’s contention that it had no choice in the matter and was acting in “full compliance with the law.”

Carlson said its a gray area of the law, and some of the attorneys with whom his team spoke said the bank’s actions could be challenged in court.

One attorney pointed to 12 USC 3403, a federal law that allows banks to tip off the feds to any information that “may be relevant to a possible violation of any statute or regulation.”

But the question, legally, is what constitutes information that “may be relevant” to a “possible” crime?

“Buying a muffin in Washington, D.C. on January 5th? Does that make you a potential ‘domestic extremist?'” Carlson asked. “According to Bank of America, yes — yes it does.”

He noted that the key issue is the definition of a political extremist.

“A lot hangs on that question, maybe everything,” he said. “Please tell us. Pointedly they won’t tell us.”

At the White House on Thursday, for example, the new national security adviser, Jake Sullivan, told reporters “domestic extremism” is the urgent crisis of our time. But, like other leaders, he didn’t define it.

“So Build Back Better isn’t just about economics. It’s about national security as well,” he said. “And then it’s about the set of issues that working families in this country are facing every day. That are challenging their lives and livelihoods. The pandemic, climate change, the threat of domestic violent extremism.” 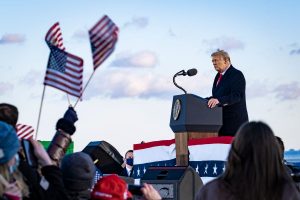 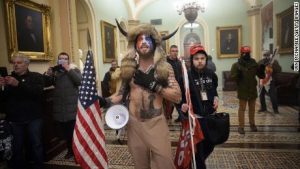