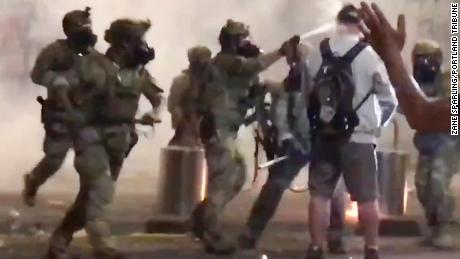 The video, posted by an independent journalist to Twitter on Sunday, shows Mike Hastie holding his camera and speaking to the officers about his experience at war, saying loudly he was a Vietnam veteran and combat medic. As he’s shouting at them, a group of armed officers are seen walking by him and one of them sprays Hastie directly in the face while up close to him as others push him out of the way, telling him to back up.
It’s unclear from the video whether the law enforcement officer who sprayed Hastie is a local or federal officer. The Department of Homeland Security did not respond to CNN’s requests for comment.
The Portland Police Bureau told CNN they have no comment on “this action by another agency.”
“The (officer) came up from behind me, I guess, and just got me directly. It blindsided me and I got a full dose of it,” Hastie told CNN in an interview.
Hastie said he approached the officers, who he believed to be deployed by the federal government, because he wanted to tell them about the “horrifying” things American soldiers were tasked with while abroad that he says people don’t know about.
“I wasn’t showing disrespect to them, I wasn’t yelling at them, I was saying, this is my story, and I want to tell you what’s going on because you work for the federal government. I worked for the federal government when I was in Vietnam and let me tell you what we did as a result of me taking an oath to defend the Constitution of the United States.”
After he’s sprayed in the video, Hastie stops and puts his hand over his eyes and is seen tearing and unable to open his eyes. “Boy, that was a direct spray,” he says.
It’s unclear what took place at the scene before the video recording began.
Protests in Portland began nearly two months ago, sparked by the death of George Floyd. While many were peaceful, recent weeks saw violent clashes after the Trump administration deployed federal agents to respond to the demonstrators. The President said the effort was to protect federal property.
Portland Mayor Ted Wheeler was in the middle of a crowd that was teargassed last week and has repeatedly demanded that federal agents leave the city, calling their presence “unconstitutional.” In at least one video, an agent is shown yanking someone off the street and placing them in an unmarked vehicle.
The Justice Department’s inspector general said Thursday it will investigate the use of force by federal law enforcement officers in both Portland and Washington, DC.

Veteran says he is ‘bearing witness’

In the video, Hastie told several people who are heard talking to him that he had been out on the streets for six days in a row. He later told CNN he passed along photographs he took and details of the protests to veterans groups across the country.
“They are very anxious to hear about what’s going on in Portland other than what they’re seeing in the news. They would like to ask somebody that they know who’s on the ground that maybe could be a little bit more objective,” he said. 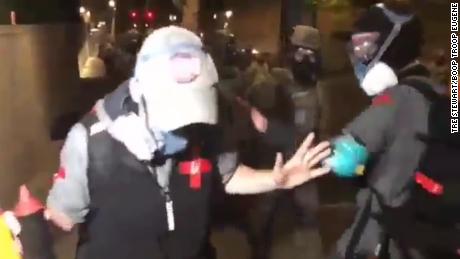 Hastie told CNN he’s lived in Portland for more than four decades.
Following his time in Vietnam, he said, he participated in several anti-war protests across the country and would often give police a “history lesson” like the one he said he was giving before he was sprayed.
He said he continues to go out to Portland’s streets despite the violent clashes in recent days because he’s “committed to bearing witness.” 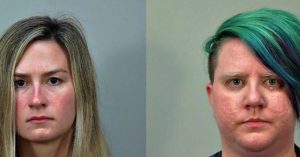