When will California children be able to get COVID-19 vaccine? What you need to know California says it is moving fast to begin providing vaccines to younger children — perhaps as soon as next week.

On Tuesday, a Food and Drug Administration advisory panel voted in favor of making kid-size doses of the Pfizer-BioNTech vaccine available. The benefits of vaccinating children 5 to 11 years old outweighed the potential risks, such as a rare heart inflammation called myocarditis that has occurred in some teens and young adults, the panel said.

How many children in California are covered?

Children 5 to 11 make up roughly 9% of California’s population, and widely vaccinating them would substantially boost the state’s inoculation coverage.

How will the vaccine be distributed?

Though California already has a network of thousands of vaccination sites, officials said they are looking to work with schools to establish more on-campus locations — not just for any newly eligible children but also for parents who might be looking for a convenient site to receive their own shots.

Though the early phase of California’s vaccination rollout was marred by scarce supplies, long lines and software problems, officials said they expect to have ample doses and capacity to handle expanded eligibility.

“We don’t anticipate any shortage of vaccine this time around,” said Dr. Marty Fenstersheib, the vaccine officer for Santa Clara County, Northern California’s most populous.

The FDA is expected to make an official decision on expanding vaccine access in the coming days. Should that agency sign off, the matter will next go to an advisory committee for the Centers for Disease Control and Prevention, which plans to meet starting Tuesday.

Before shots start going into California youngsters’ arms, there will be an additional review by the Western States Scientific Safety Review Workgroup, a coalition of public health experts from California, Nevada, Oregon and Washington. That review might take an additional day to complete.

So it’s possible children in the younger age group will be able to get their first dose of the Pfizer vaccine by the middle of next week.

Santa Clara County health officials said that under the most optimistic timeline, shots could be available by next Wednesday or Thursday.

Los Angeles County officials estimated that shots could be available late next week.

Based on that timeline, children could complete their two-dose vaccine regimen in time for the busy winter holiday season.

How will doses be administered?

As with people 12 and older, the Pfizer vaccine for the 5-11 age group will be administered in two parts, with the second dose recommended by the manufacturer to be given three weeks after the first.

Where are we with vaccinations overall?

More than 68% of Californians have received at least one dose and about 62% are considered fully vaccinated, according to data compiled by The Times. However, officials say that level needs to be considerably higher to reliably protect the state against another coronavirus surge.

“We all want to be past this pandemic,” Gov. Gavin Newsom told reporters Wednesday, shortly after receiving his own Moderna booster, which followed his original Johnson & Johnson shot. “But we know the ticket out of this pandemic is getting these booster shots and getting the unvaccinated vaccinated. And we still have more work to do.” 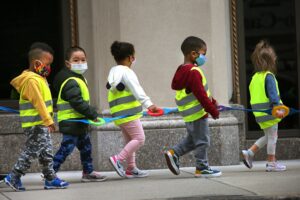 Readers: What will it mean to you when young children can receive the COVID-19 vaccine?