Rioters explode at protest, surround and smash up car. It turns out the driver has cerebral palsy.

COLUMBUS, OH– Back on the evening of May 31st, a man by the name of Eldon Hawkins unwittingly drove his burgundy 2010 Buick LaCrosse sedan into the heart of a protest at Board and High Street, which apparently unleashed a furious response by protesters.

According to the Columbus Dispatch, Hawkins, who is 58-years-old and who has cerebral palsy, said he was left shaken by the entire experience.  Not to mention, the damage done to his car topped $8,000. On Monday, during the Columbus City Council meeting, Hawkins spoke about what happened.

The Columbus Police Department recently released a compilation of videos of the incident, which occurred around 7 p.m. on May 31st. As Hawkins remembers it, he was driving east on Broad Street to his downtown apartment after he drove to get dinner and flowers.

According to the Blaze, he explained:

“I was at the intersection and I got the green light. I was trying to took my horn, thinking, ‘Hey guys, look at the light.’”

Leftists go berserk at protest, surround and smash up car — and it turns out driver has cerebral palsy https://t.co/NhrtdPDSaG pic.twitter.com/a7Pp6b6Hx8

The video released by the police shows that Hawkins passed High Street, which was blocked. He tried to back up his vehicle to get off the blocked street and accidentally struck a person on a bicycle with his back bumper. Apparently, this triggered a rapid angry response from protesters, who swarmed the car.

“They threw a bicycle on my windshield and started kicking my doors and windows. It scared the life out of me. I thought they were going to kill me.”

A witness to what transpired, Phillip Hurst told WBNS:

The video shows rioting protesters jumping on his Buick, throwing objects at it, and smashing out its windows. At one point, the trunk popped open and the protesters grabbed and tossed its contents.

“There were some nice people who came and pulled me out of the car and took me to the curb.”

The video then shows that after the initial reaction, people who had calmed down among the crowd called for others in the crowd to calm down. One man using a bullhorn helped to quell the situation, telling people, “this is not what they wanted.”

Police told WSYX-TV that the protesters also acted violently toward those who tried to help him and stop the violence.

“[They] reacted with a lot of anger and hate until soon after they realized this gentleman is handicapped.”

The video does show things soon calmed down as more people took control and prevented further damage to the vehicle. Hawkins said police towed his car to his house and it cost $8,129.29 to repair the damage.

WBNS said Hawkins church and some people at the protest raised money to help him cover some of the costs.

“It’s one thing to protest, but when people start breaking windows and spray painting the F-word, that’s turning this beautiful city into a dive.”

Hawkins said his father was a union man and he remembers once marching with his father in a show of solidarity with the Fraternal Order of Police and the firefighters union during a protest at the Statehouse.

“We did not break one window and we did not spray-paint foul language because this is our city. If trouble-makers don’t like it, they can leave.”

“I think it’s a horrible same. People can protest and we all have that right, there is a right and a wrong way to do it.”

Police are asking for help in identifying who might have been involved. Those who have information or other videos of the incidents are asked to contact Columbus Police Detective Steven Nace at [email protected] or 614-654-2119. People can also pass along anonymous tips through Central Ohio Crime Stoppers at 614-461-TIPS (8477).

While rioters are targeting the disabled, some protesters are also using their children as human shields during riots.

Here’s our recent story on that out of Portland, Oregon.

A video of an Oregon protester has gone viral after it appears this unidentified person was seen holding a baby as what some are describing as an actual human shield.

According to Heavy, late Saturday night, Drew Hernandez, a host and reporter for the web show, “Lives Matter,” uploaded a series of Twitter posts showing video documentation of Antifa and Black Lives Matter protests in Portland.

Currently, details surrounding the protests and why this person was seemingly using a baby as a shield are unclear. Hernandez posted a video of an unidentified person holding a baby while walking between rioters and federal officers during a violent demonstration.

The video has been viewed more than 40,000 times. Many viewers did not take lightly to this video and posted their own feelings about it.

And the award for worst mother of the year goes to..

As in most large cities spanning coast to coast, there have been protests in Portland for the past 40 nights.  These protests have drawn crowds of more than 10,000 people. Marches have often culminated at the Multnomah County Justice Center.

In recent weeks, hundreds of people from across the city have continued to show up to the Justice Center nightly to protest. According to OPB, in a presentation Wednesday, Portland Police Bureau Deputy Police Chief Chris Davis attempted to draw a distinction between what he called “legitimate protest” and “criminal activity.”

“There’s a very big different between protests and the kind of mayhem that we’ve seen every night.”

These demonstrations have routinely ended in violence after the Portland Police respond to thrown objects with impact munitions and tear gas to disperse the crowd.

In the presentation, Davis said protesters have thrown frozen water bottles and rocks at the police, at times causing injuries.  The demonstrations are affecting the city in negative ways, especially financially.

Portland terrorists attempt to use a baby as a human shield. They were trying to get the baby to cross the police tape. This looks like something ISIS would do. Arrest them all now. @realDonaldTrump @USMarshalsHQ #Portland #PortlandProtests pic.twitter.com/B9VB8PWlNt

In total, Davis said that more than 100 city employees and members of the public have been injured during the protests, which according to the Portland Police Bureau, have resulted in roughly $23 million in damages and lost business in the city.

Overall, Davis painted a dark picture of the protesters showing up every night to the Justice Center to protest racism, police violence, and to demand the police be defunded.

In his presentation, he portrayed the presence of umbrellas, respirators, and makeshift shields in the crowd as evidence that the protesters are highly organized.  The presentation also had videos of protesters staying together in the face of police dispersal efforts.

“Just watch how people are trying to regroup this group of people so they can get them back focused on that common objective. This group is not restricted from leaving this area at all. They can walk away.”

According to Heavy, this is what they know so far about the protests that took place on Saturday night when the individual was caught on camera using a baby as a human shield.

Dude, Antifa is LITERALLY trying to use babies as human shields against the feds. These people should instantly lose custody of their children for being unfit parents, this is outright disturbing and despicable behavior for a parent to bring their child to use as a human shield. https://t.co/jiU1RP8xHT

Oregon Live reported that numerous events were planned for Portland on Saturday, as anti-police brutality protests continued for 44 consecutive days. The city protests began in the wake of the killing of George Floyd in Minneapolis.

Nearly 100 people joined the Haymarket Pole Cooperative early Saturday to take part in the StripperStrikePDX protest, which began around 3:30 p.m. on Southeast Madison Street. The march sought to bring awareness to the lack of transparency with anti-discrimination policies and practices in the adult entertainment industry.

Black Lives Matter Portland organized a “Direct Action” protest, which started around the same time, 4 p.m. at the Burnside Bridge. About 20 to 30 people gathered and marched to the Multnomah County Justice Center.

In addition to these two demonstrations, to celebrate WorldWide Rollout Day, local skaters, rollerbladers, and bikers organized a rolling demonstration led by people of color that started around 5:30 p.m. at Northeast Portland’s Fernhill Park.

The demonstrators encouraged people to roller-skate, bike, use their wheelchair, or other rolling transportation in a march promoting a message of “erasing hate.”

Also, several dozen people gathered in Salem outside the Oregon State Capitol for a “We Back the Blue” demonstration, which was happening across the street from a “Black Lives Matter” demonstration.

The PNW Youth Liberation Front organized a vigil for Dominique Dunn at the location where he was shot and killed Thursday night.

Several other organized demonstrations took place in Portland at the same time, overlapping each other.

As Davis reported in his presentation, the past six weeks have been unprecedented in Portland’s history and that it simply is not sustainable. 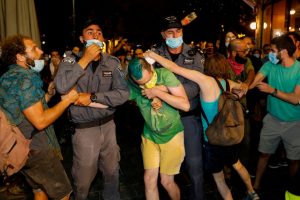