A video of an Oregon State Police officer appearing to make a white power symbol at a Black Lives Matter protest on Saturday in Salem, Oregon, has prompted an internal investigation.

NBC News is not publishing or linking to the video to avoid providing a platform to apparent expressions of hate or white supremacy.

The footage, which was streamed live on social media, shows a police officer wearing a mask while observing counter-protesters during Saturday’s demonstration. The officer then walks towards one of the counter-protesters and flashes the “OK” hand gesture, which is used among extremist circles to signal “white power,” according to the Anti Defamation League. The counter-protester is then seen patting the officer on the back.

“We are aware of the video and investigating,” Capt. Timothy R. Fox of the Oregon State Police told NBC News on Sunday.

According to the protester who caught the interaction on camera, Joe Smothers, some of the counter-protesters may have been associated with the far right organization the Proud Boys, which has been designated a hate group by the Southern Poverty Law Center.

“Proud Boys and the armed militia planned to disrupt the protest and have been putting out a call to arms for the past week,” said Smothers, 20, who was demonstrating in support of the Black Lives Matter movement. Members of the Proud Boys had been flashing the “OK” sign throughout the day, Smothers added.

It is not the first time that a police officer has been caught flashing the hate symbol during demonstrations protesting the death of George Floyd. The NYPD opened an investigation after an officer appeared to make the symbol during a protest in June. 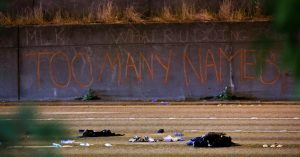