A dog walker passes a social distancing sign at Domino Park on May 8. | AP Photo

NEW YORK — Coronavirus cases are popping up in more affluent Brooklyn and Manhattan neighborhoods that weren’t hard hit at the height of the pandemic, city health officials said Tuesday.

As the infection rate rises among New Yorkers in their 20s, the geography of the virus has also shifted, with young adults now contracting the disease outside the working-class outer borough areas that have been the epicenter.

“We’re seeing cases in parts of Manhattan and parts of Brooklyn among that age group, that doesn’t exactly overlay with our poverty and racial disparities that we’ve seen in the past,” said Dr. Jay Varma, a senior adviser for public health in the mayor’s office.

As the pandemic cut a deadly course across the city, where it has killed more than 23,000 people, lower-income neighborhoods in the outer boroughs suffered the most cases and the most deaths. Latino and Black New Yorkers have died at twice the rate of whites.

The virus’ spread has decreased dramatically from its height, but the city is still seeing several hundred new cases each day. Total cases have stayed relatively flat, but data shows the infection rate is rising for New Yorkers in their 20s, while it is falling for people over 40.

Neighborhoods in Manhattan and brownstone Brooklyn, which were largely spared earlier in the pandemic, are among those now seeing increases among young adults as the city reopens.

“Some of the areas that we’re seeing more of these [infections] are areas that we hadn’t seen increases in cases before this,” Varma said.

Officials pointed to young adults who had been quarantined at home venturing out and socializing more as the main driver of the uptick, though they have not identified exactly where the new cases are being transmitted.

“People are now moving around more. They’re socializing more,” Varma said. “The most important way that we dropped transmission was to keep people separated from each other. People were essentially confined to their homes.”

Restaurants and bars reopened for outdoor service on June 22, and gatherings of up to 25 people are now legal as long as social distancing is maintained.

Varma said it was “possible” people have gotten infected at recent protests against police brutality but argued protests are unlikely to be the main cause.

“It is certainly possible that people who were out and about at protests might have acquired infection there, but it’s also certainly possible that they could have acquired the infection in any of a number of other places as well,” he said. “This isn’t directly related to any one event, but more likely just a combination of increasing social mobility.”

With many New Yorkers still out of work and struggling to afford food due to the pandemic, Mayor Bill de Blasio also announced the Mayor’s Fund has raised $54.5 million in cash and donations for Covid-19 relief.

The money is going toward grants for restaurants, meals for health care workers, relief payments for immigrants who can’t get federal funds and other programs. The city also plans to offer micro-grants for survivors of domestic violence, officials said.

“It’s not only the worst health care crisis in a century. It’s the worst economic crisis in 90 years since the Great Depression, what we’re dealing with right now. And there just aren’t enough resources to go around to help people,” de Blasio said.

The city’s health care system is prepared for the possibility that the current level of infection — several hundred new cases per day — could continue indefinitely, though officials still hope to drive it down, de Blasio said.

“If we were at this exact level, we would be able to protect people. We have plenty of hospital capacity. Our test and trace corps can every single day follow up on the number of cases that come in each day. We could continue to move our city forward at this level, but obviously our goal is to do better,” he said. “What we’re finding is in fact we can sustain our health care system even with several hundred new cases a day.”

“We’re going to constantly be at risk of cases being imported from other parts of the country,” Varma said. 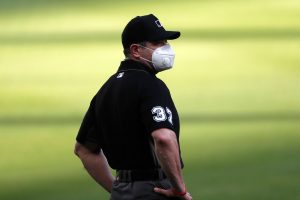 11 MLB umpires opt out of 2020 season over coronavirus concerns L.A. on verge of shutting down again amid COVID-19 spike, Garcetti warns