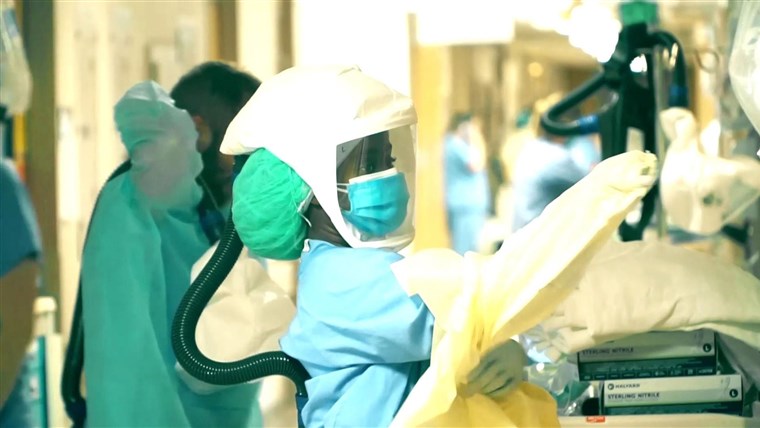 In the early weeks of the pandemic, the Cheyenne River Sioux Tribe in South Dakota enacted drastic measures to fend off the spread of the coronavirus across its stark and sprawling prairie land.

The tribe installed checkpoints in April on roadways cutting through the Cheyenne River Sioux Indian Reservation to limit drivers without official business — part of a robust contact tracing program.

“We are doing this to save our residents, their lives,” tribal Chairman Harold Frazier told NPR in May, when there was just one case of Covid-19 on the reservation, where about 12,000 people reside.

Even as case numbers stayed low, tribal officials imposed a mask mandate over the summer and rolled out mass testing events. And after South Dakota logged a record number of infections this month, Frazier on Monday began a 10-day lockdown of Eagle Butte, the remote town where the tribe’s headquarters are located.

The efforts are in sharp contrast to how South Dakota Gov. Kristi Noem has overseen the pandemic in her state of nearly 885,000 residents.

Noem, a Republican, has avoided statewide mask mandates, lockdowns and the closing or restricting of businesses and churches. She said in a message last week that “we won’t stop or discourage you from thanking God and spending time together this Thanksgiving” — a lenient message compared to those of the leaders of most other states, who have enforced curfews, stay-at-home orders and restrictions on indoor gatherings in the face of a surge in case numbers nationwide.

Noem has also criticized the checkpoints set up by the Cheyenne River Sioux, as well as other Native American tribes in the state. In May, she asked the Trump administration to help intervene in a compromise to allow checkpoints on tribal roads but not state and federal ones within reservations.

Tribal members and other Indigenous-led groups in South Dakota say the lack of sweeping action — and the overt displays of opposition — on the part of state and some local officials stand to undermine their tribal sovereignty and attempts to protect their people during an intensifying public health crisis.

While the overall number of new Covid-19 infections has eased in recent days after it hit a record of more than 2,000 positive cases on Nov. 12, South Dakota this week still has among the highest rates of positivity and per capita deaths in the country, according to data from the Johns Hopkins Coronavirus Resource Center and the Centers for Disease Control and Prevention.

“It’s like we’re trapped in a house on fire, and we’re doing our best to put it out,” said Remi Bald Eagle, a Cheyenne River Sioux Tribe spokesman. “We see the firetrucks coming in the form of a vaccine, and we’re wondering if it will get here in time before the fire burns us to death.”

The Cheyenne River Sioux Indian Reservation has had more than 1,100 cases of Covid-19, the disease caused by the coronavirus, with at least 13 deaths, tribal health officials say.

Statewide, Native Americans have been the hardest hit of any ethnic or racial group: While they make up only 9 percent of the population, they represent 14 percent of all cases and 15 percent of all deaths, according to Johns Hopkins‘ data.

Bald Eagle said many tribal members were previously diagnosed with underlying health conditions, such as diabetes and heart disease, and had limited access to health care on the reservation, which is partly in one of the most impoverished counties in the country.

The tribe has scrambled to set up makeshift beds and units, some of them in hotels and bingo halls, to supplement the eight hospital beds at the Cheyenne River Health Center, an Indian Health Services facility. The closest large hospitals, in Rapid City and in Bismarck, North Dakota, are two to three hours away, and health care professionals in South Dakota have warned of an overburdened health system.

A disturbing disconnect has also emerged among some patients. A South Dakota emergency room nurse’s tweets went viral this month after she said she had encountered people dying of Covid-19 who didn’t believe the virus was real.

Bald Eagle said tribes have a lot to lose if they ignore the science or take a hands-off approach, as the state has largely done.

“Some of those who died were our elders,” he said. “They’re some of our magnificent treasures. When they die, they take with them some of our language and our culture and our heritage, and we won’t get that back.”

The governor’s office responded by referring to Noem’s remarks at a news conference last week in which she encouraged hand-washing and social distancing.

“I’ve consistently said that people that want to wear masks should wear masks, and people that don’t shouldn’t be shamed because they choose not to,” Noem said.

In a statement, the South Dakota State Medical Association said it supports a statewide mask mandate: “Masks work to decrease the risk of infection for everyone.”

Tension has been escalating between tribes in South Dakota and Noem since the checkpoints went up.

In June, the Cheyenne River Sioux Tribe sued the federal government alleging that ever since Noem’s plea for the White House’s help, the Trump administration has abused its power by coercing the tribe to end its Covid-19 response plan, including its checkpoints.

The coercion included “threatening both monetary penalties and forcible dismantling of the Tribe’s law enforcement program,” the complaint alleges.

Noem has said that South Dakota has rights that allow residents and travelers to access roadways and that the federal government has “an interest in interstate commerce,” as well. But the tribe argues that it has jurisdictional powers over the state, and a 1990 appeals court ruling dictates that the state doesn’t have control over roadways that cut through Native lands without tribal consent.

The lawsuit continues, and the tribe plans to respond in the coming days to the federal government’s request to dismiss the case, said Nicole Ducheneaux, a tribal member and attorney. In the meantime, the tribe’s nine checkpoints remain up.

“We are unspeakably vulnerable, and the state that surrounds us and the federal government that is supposed to protect us have decided to elevate a petty political agenda over human life,” Ducheneaux said. “In the broader scheme of things, it was not so long ago that my people witnessed catastrophic disease and death that decimated our population, destabilized our society and almost wiped us out. If it were not for our sovereign powers of self-government, we would be at the mercy of Donald Trump and Kristi Noem, which would be a disaster of potentially existential proportions for our people.”

A spokesman for the Interior Department, which is named in the suit, said tribal leaders had to follow federal regulations shared in early April about what steps to take to restrict access to or close roadways within reservations.

The federal government seeks to have the tribe’s suit dismissed, in part because, it said, the checkpoints were operating with “unlawfully deputized individuals who did not have the required background investigations and/or basic police training.”

The worsening pandemic has led other Native American groups in South Dakota to spar with local governments.

In October, police in Rapid City, the state’s second-largest city, ordered the dismantling of an outdoor settlement — called Camp Mniluzahan — where Native Americans struggling with substance abuse and other hardships were provided shelter and food.

Police cited five of the volunteers, known as Creek Patrol, with obstruction and resisting arrest. A sixth person utilizing the camp was also cited. City officials said the camp was erected without proper permits in an area considered a flood zone. The camp has since moved from public property to land jointly owned by the Oglala, Rosebud and Cheyenne River Sioux tribes.

Rapid City Mayor Steve Allender said he didn’t endorse the camp, and he hinted at the tensions last month.

“Every conversation about the homeless in the last month has been peppered with phrases like ‘stolen land’ and ‘treaty violations’ and ‘getting land back’ and that sort of thing,” Allender said, according to NBC affiliate KNBN of Rapid City. “And so it appears that there’s something much larger at hand than simply seeking shelter for the homeless.”

Mark Tilsen, a Creek Patrol volunteer and member of the Oglala Lakota, said the lack of adequate social services or support from the local government underscores how Native Americans have historically had to cope with insufficient resources.

“We’re essentially banding together to solve our problems as they come up,” Tilsen said, crediting the efforts of previous generations of Native volunteers and activists. “We are lucky that we have found a way that the city cannot interfere with our work.”

Natalie Stites Means, a director of the local Meals for Relatives program for Native American families affected by Covid-19 and a member of the Cheyenne River Sioux Tribe, said she worries that the disparate impact of the coronavirus on Indigenous communities is only going to worsen in the coming weeks because of lax attitudes. There is already a waiting list for families in need of food assistance, and Means counts on volunteers to help cook and transport meals.

“I’m not counting on Noem’s administration to have the chops to do anything,” Means said. “We’re on our own.” 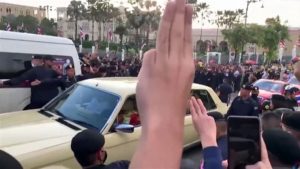