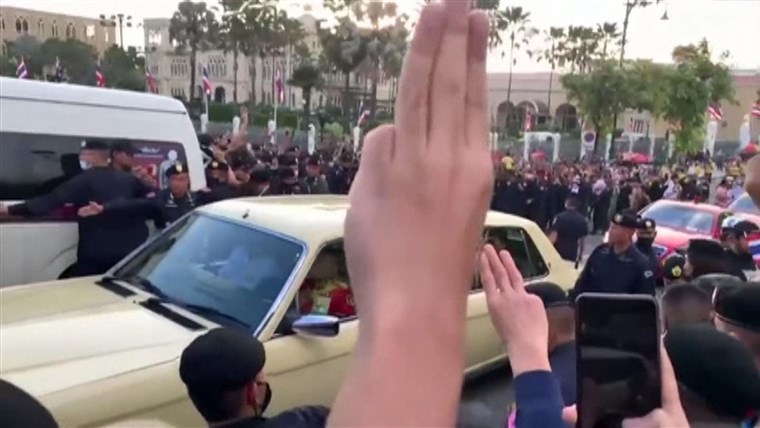 Most high school kids have enough to worry about without pounding the streets demanding reforms in an autocratic regime.

But in Thailand, that’s exactly what thousands of students — some as young as 10 — have been doing for the last four months.

They have joined forces with college students and longtime democracy campaigners to call for change in a country ruled by a regime loyal to the monarchy, with a constitution drawn up in the wake up of a military coup.

Demonstrations continue in Bangkok, where police have used water cannons and tear gas to disperse protesters, as the country’s parliament discussed ways to change the constitution but in ways that fall far short of the protesters’ demands for meaningful democratic reform.

Pro-democracy protesters hold up a three-fingered salute during a rally in Bangkok.Lauren DeCicca / Getty Images

Sporting a three-fingered salute borrowed from “The Hunger Games” and wearing white ribbons — symbols of their resistance — many students attend protests still dressed in their school uniforms.

They were originally motivated by plans to change the strictly traditional Thai school culture — a common sign at protests reads: “Our first dictatorship is school.”

The Thai Lawyers for Human Rights group said this week that at least four protesters aged under 18 had been arrested for breaching a decree brought in as the government declared a state of emergency on Oct. 15.

Akkarasorn Opilan, known as Ang-Ang, 16, said her interest in politics started “a while back” but became more intense this year when she joined her first protest in August.

“I went with my friends and my mom,” she said. “My mom does not usually join the protests, but she [sometimes] joins me for safety reasons.”

She spells out the three demands the movement is making: the resignation of Prime Minister Prayuth Chan-ocha and his Cabinet, the redrafting of the constitution and the strict limitation of monarchy’s power.

Prayuth, a retired army general who seized power in a coup in 2014, changed the constitution in 2017 to ensure the continued dominance of the monarchy and the military, which appoints all 250 members of the Senate.

Thai King Maha Vajiralongkorn and Queen Suthida ride on a train during the inauguration of a subway station in Bangkok on Nov. 14.Royal Household Bureau / Reuters

“It’s important for me and for Thailand the future of this country belongs to us,” Ang-Ang said. “The parliament, the Cabinet and government may be in power now, but the country needs the younger generations for the future of the country.

“Our voice must be the voice that matters, as well. We are the voice of the future generation of Thailand,” she added.

Sunai Phasuk, a senior researcher for Human Rights Watch in Bangkok, said the recent protests were organic and spontaneous.

“These people are very young. They show up in their school uniform — they’re children. They are not affiliated with any party or official movement,” he said.

According to Human Rights Watch, children as young as 10 have taken part in protests. Most wear masks — to protect not just against Covid-19, but also against persecution.

“We have documents showing intimidation by the police and security forces — they went into high schools looking for students who took part in pro-democracy activities,” Sunai said.

“It appears they had the cooperation of schools — the schools are collaborating with the authorities to add more pressure on these students,” he said.

Demonstrators use inflatable rubber ducks as shields to protect themselves from water cannons during an anti-government protest, outside the parliament in Bangkok, Thailand.Athit Perawongmetha / Reuters

Two groups of high school students submitted a complaint to the Education Ministry on Aug. 24 that accused 109 schools of harassing students who took part in pro-democracy protests.

Lawyers acting for the students said they recorded 103 cases of harassment in the three days following a major rally Aug. 16.

UNICEF, the United Nations’ children’s agency, said in August that it was concerned that children could be harmed during the protests.

University students have also played a key role in the protests.

Panisa Khueanphet, 21, a fourth-year student in communications art at Chulalongkorn University in Bangkok, who is originally from Chiang Rai province in the north, said she was protesting to “live a better life.”

“The highest dream is to have change in society and change in social structure. I want to see my country develop before I die,” she said.

Her parents asked her not to post on social media about the monarchy for fear of retribution from authorities. A defamation law prohibits any Thai from criticizing or offending the monarchy.

Trying to be ‘dangerous’

Older, more conservative Thais were shocked when the king was named in an onstage rally Aug. 3 by lawyer and activist Anon Nampa. He and eight other people were arrested, and charges are pending.

Before he was arrested, Nampa told NBC News: “I am dangerous to the existence of the dictatorship. I am trying to be a dangerous person. This is not something I can compromise on. It’s the fight for change in the political game.”

An election took place last year, but for democracy activists it was a hollow exercise that reaffirmed the power of the former military junta, which derives its legitimacy from the monarchy.

“It’s a long saga, but this student-led protest movement is a culmination of Thailand’s struggle to arrive in the 21st century,” said Thitinan Pongsudhirak, a political scientist at Chulalongkorn University.

The coup of 2014 was seen as a response to the success of Thaksin Shinawatra, a political leader whose party won four elections, putting him at odds with the country’s traditional power base.

Support for the aims of the student-led movement was bolstered further by the disqualification of the anti-establishment Future Forward party in February.

“By kicking Future Forward out of the system, the Thai elite was saying, ‘People like you have no place in this society, and you have no right to engage in what’s going on politically,'” said Duncan McCargo, a professor of political science at Copenhagen University and co-author of a new book about Future Forward.

“Even by those who didn’t support or particularly like Future Forward — it was a massive thing,” McCargo said.

Traditionally, Thailand’s paternalistic leadership ruled through the moral authority afforded by the country’s much-loved monarch Bhumibol Adulyadej, also known as Rama IX, who ruled from 1946 until his death in 2016.

Thai King Bhumibol Adulyadej sits with his family at a ceremony marking his 85th birthday at Ananta Samakhom Throne Hall in Bangkok in December 2012. Hundreds of thousands of Thais lined the streets to pay tribute. Bhumibol died in 2016.Royal Household Bureau via EPA file

In 2011 Forbes magazine estimated his personal fortune to be at least $30 billion, making him comfortably the world’s richest monarch at the time.

His heir and successor, Maha Vajiralongkorn, also known as Rama X, transferred that wealth to himself in 2018. The king, a less revered figure than his father, spends much of his time in Germany and has courted controversy through his relationships and for making erratic senior military appointments. A miniature poodle, Fufu, was promoted to air chief marshal of the Royal Thai Air Force.

The protest movement is not universally popular.

“These demands are so shocking to Thai people,” said Thitinan, the political scientist. “They grew up under the late king. The current king is very different, and people are slowly coming round, slowly starting to grapple with these demands.

“But it’s a long, daunting, uphill task to reform the monarchy. Would the monarch allow himself to be reformed?” 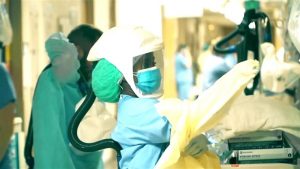 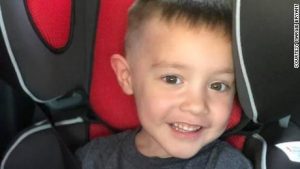