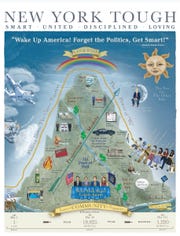 NY Gov. Andrew Cuomo slammed President Donald Trump for his handling of the coronavirus pandemic and for not wearing a mask in public. (July 1) AP Domestic

ALBANY, N.Y. – On Monday, New York Gov. Andrew Cuomo unveiled a new poster he helped design that showed, among many other things, New York coming down the mountain of the coronavirus pandemic.

“What we did was historic because we did tame the beast. We did turn the corner. We did plateau that mountain. And then we came down the other side,” Cuomo declared at his regular COVID-19 briefing.

“And they will be talking about what we did for decades to come.”

But they will also be talking about New York still having, by far, the highest death toll in the nation, even as its infection rate now is among the lowest in the nation, Dr. Sanjay Gupta said Tuesday afternoon on CNN’s “The Lead with Jake Tapper.”

“I’m a little surprised by that poster, I got to tell you, because I think, if anything, what this virus has taught us is that we need to have a significant amount of humility,” Gupta, the neurosurgeon and chief CNN medical correspondent, told Tapper.

“This virus surprises us over and over again. There’s no place in the country that’s not vulnerable.”

Rich Azzopardi, Cuomo’s senior advisor, said the problem was the federal government not shutting down travel from Europe to the U.S. for six months prior to the pandemic, leading to more than 3 million people coming to New York.

“You’re damn right New York got hit the hardest, and it was only New Yorkers banding together that got us through this,” Azzopardi said.

“Spare me the punditry. This is a cautionary tale and one this illustration made crystal clear could and will repeat itself if we don’t continue to stay smart, socially distance, wash your hands and wear a mask.”

Cuomo has stressed that New York’s infection rate, which now hovers around about 1% of those tested, could easily jump up if residents are not diligent with safety precautions.

New York is also requiring people from states with high infection rates to self quarantine when they enter New York.

New York reported about 25,000 deaths from coronavirus as of Wednesday, but if “probable” deaths in New York City are counted, the total is about 32,400 deaths.

The state Department of Health doesn’t include probable deaths, but national trackers like John Hopkins University do.

New York had as many as 800 deaths a day from the virus in early April, but has been able to cut the daily death toll to just a few in recent weeks.

The state with the second most number of deaths in New Jersey with about 15,500.

“We just have to cross our fingers and hope that it stays there because you see the infections now all across the country and it’s going crazy,” Cuomo said Monday night on NBC’s “The Tonight Show with Jimmy Fallon.”

“We’re just worried that the infection is going to come from other states now back to New York which would be a real tragedy.”

Coronavirus in New York: As deaths and cases soar, should NY leaders have acted sooner?

Still, Gupta and Tapper on CNN, which is also home to the nightly prime-time show hosted by the governor’s younger brother, Chris, were critical of Cuomo’s tone and poster.

“I think that we should have learned, I think we have learned, that victory laps are not the thing to be doing, because we’re not through this by a long shot, sad to say, even in New York,” Gupta said.

Tapper said Cuomo’s poster — which the state is selling for $11.50, which is the cost of production — has plenty of symbols, but none about the state’s death toll, calling it “revisionism.”

“No rendering on that poster of criticism that Governor Cuomo ignored warnings, no depiction of the study that he could have saved thousands of lives had he and Mayor de Blasio acted sooner,” Tapper said.

“No painting there on the poster of his since rescinded order that nursing homes take all infected patients in.”

The governor has been a regular guest on his brother’s CNN show, and Chris Cuomo last month hailed his brother’s management of the virus.

“Obviously I love you as a brother, obviously I’ll never be objective, obviously I think you’re the best politician in the country,” Chris said.

“But I hope you feel good about what you did for your people because I know they appreciate it… I’ve never seen anything like what you did and that’s why I’m so happy to have had you on the show. And I hope you know that.”

Should New York have acted sooner?

Cuomo has faced criticism for not shutting down all non-essential businesses earlier in March, rather than on March 22, when the number of cases had already reached 15,000 and deaths reached 114.

He has also been knocked for a March 25 directive to return residents of nursing homes with COVID-19 back to the facilities.

The order was reversed in early May, and a health department study last week contended the directive wasn’t the reason for more than 6,000 deaths in nursing homes, rather it was spread by workers and visitors earlier in March and sooner.

A Columbia University study in May contended that New York may have been able to save as many as 17,000 lives if it shut the state down two weeks earlier than it did.

“I think there’s two ways of sort of looking at this,” Gupta said.” On one hand, the house was on fire, and Governor Cuomo helped put the fire out.”

“But I think there’s also, we heard from a lot of our medical contributors today, infectious disease specialists, who say, look, I mean, part of the legacy, part of the story will be that, did New York act too slowly. as well, initially?”

Still, Gupta said, “New York is the place, at least within the United States, that people will point to and say, they did — they have done a good job. That’s a place that has at least given a little bit of inspiration to other places that they can bring these numbers down.”

Some lawmakers were also critical of the poster.

“I mean this with 0% snark: how is this not wildly offensive? This is an artful monument to death and tragedy being sold by the state. I’m legit perplexed,” said Sen. Zellnor Myrie, D-Brooklyn, on Twitter.

New York’s slow reopening in four phases since May 15 has gone fairly smooth, and the infection rates and death tolls have stayed low even as businesses, recreational activities and retail have resumed.

Compare that to record high infection rates in many parts of the country, Cuomo said, that opened too soon and didn’t take proper safety precautions, such as social distancing and mask wearing — which Cuomo mandated in New York in mid-April.

Initially, states sought to either ban New Yorkers from entering or require them to quarantine when they arrived. Now, New York has a 14-day quarantine order on 22 states.

“We’ve been open now for about two months as a state, and we have the infection rate way down low. And it was never going to work, what the president said,” the Democratic governor told Fallon.

“It was never going to work to deny it, hope that it was magically going to disappear or have states reopening without following science whatsoever.”

Many Americans might not get another stimulus check: Here’s where things stand on another COVID-19 bill 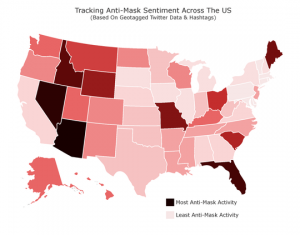 The state most resistant to wearing masks for coronavirus protection? Arizona, study says