The coronavirus is on the decline in many parts of California but continues to spread in Los Angeles County, sparking new debate about whether officials will need to begin easing stay-at-home restrictions in certain sections of the state while giving harder-hit regions time to flatten the curve.

The state’s epidemiological map is starting to reflect the adage that California is many states in one. Nineteen counties from Humboldt to Tuolumne have recorded no fatalities from the virus. And even moderately populated counties such as Fresno and Monterey are holding single-digit death tolls.

But Los Angeles County has had 944 people die from COVID-19, with 315 passing away last week alone.

Even adjusted for its larger population, its rate of 9.3 deaths per 100,000 people is 58% higher than the next hardest hit urban county, Riverside, and 72% higher than the epicenter of the Bay Area, Santa Clara County, according to a Times analysis of coronavirus data.

Half of all hospitalized coronavirus patients in California are being treated in Los Angeles County, which is home to a quarter of the state’s population, the analysis found.

Though a peak in deaths will usually lag behind the peak in infections by one to three weeks, it’s hard to tell whether Los Angeles County has bent the curve on the virus’ spread. There were 7,218 confirmed new cases for the seven-day period that ended Sunday, compared with 3,152 the previous week.

But inconsistent testing and backlogs at laboratories often make those numbers unreliable. Another key measure of infection, the number of hospitalizations, remained relatively stable last week, neither rising nor falling.

The differing situations across the state are causing some local officials to chafe under Gov. Gavin Newsom’s blanket stay-at-home order, while others are pushing to prolong it.

Officials in parts of the Central Coast, Central Valley and far Northern California, where the coronavirus appears more under control, want to reopen their economy and have asked Newsom to work with them to phase out their shelter-at-home order.

Some have proposed a slow reopening of such places as restaurants and churches, with a continued focus on social distancing and the use of face coverings.

The stark differences in the how the coronavirus has affected various parts of California has become a vexing issue as talk turns to easing the restrictions. Officials in the six counties in the north — Butte, Glenn, Tehama, Yuba, Sutter and Colusa — noted that as of Friday the region had only one COVID-19 patient in intensive care. San Luis Obispo County, another place hoping to reopen, has recorded just one death.

Newsom has acknowledged these differences, saying “local conditions” will be taken into account when considering decisions to ease restrictions.

But many urban counties, including Los Angeles, remain concerned that reopening too soon could cause new outbreaks and end up hurting the economy more in the long run.

Six San Francisco Bay Area counties hit hard by COVID-19 announced on Monday that they plan to largely retain shelter-in-place orders through the month of May.

“Prematurely lifting restrictions could easily lead to a large surge in cases,” said a statement by health officers for Alameda, Contra Costa, Marin, San Francisco, San Mateo and Santa Clara counties, as well as the city of Berkeley, which has its own health department.

They said they were planning to ease some of the restrictions, but did not specify which.

Los Angeles Mayor Eric Garcetti, who has also expressed concern about reopening too early, struck an optimistic note Monday. He said social distancing measures were proving effective, “the curve really is beginning to flatten,” and even suggested that easing restrictions under the city’s safer-at-home order could be weeks away.

Los Angeles County’s stay-at-home order lasts until May 15. Barbara Ferrer, the county’s director of public health, said officials are hopeful that coronavirus deaths and overall case counts will begin to decrease by mid-May.

“We are going to be driven by our experiences — increase our capacity to test, identity people who are positive and then do contact tracing,” she said. “I think as we put those systems in place, we can be at the point where we can relax.”

A significant factor in the high number of deaths in Los Angeles County is the virus running through numerous assisted living facilities, where elderly patients are extremely vulnerable to the disease. Medical troops with California’s National Guard have been deployed to assist staff at a handful of nursing homes. As of Monday, 45% of all coronavirus deaths in L.A. County have been linked to congregate living facilities, largely in nursing homes.

Of the 29 deaths Ferrer reported on Monday, 11 were healthcare workers. And of all the people who have died during the pandemic, she said, 92% had underlying health issues.

Bad as the numbers are, Los Angeles County is nowhere near New York City, which has suffered 11,708 deaths — a rate of 139 per 100,000 people. Places such as New Orleans, Boston and Detroit also have death rates many times higher than Los Angeles County.

Dr. Grant Colfax, the director of public health in San Francisco, said one of the key metrics he looks at is whether there’s a sustained decline in the number of people hospitalized.

“I’m talking about significant reductions over a period of two weeks,” Colfax said. The incubation period of the coronavirus is believed to be from two to 14 days.

For now, the number of hospitalizations has remained roughly flat, and Colfax said he would be looking over the next two to four weeks to see a decline in hospitalization numbers.

San Francisco Mayor London Breed said she understood it would be challenging to endure another month of staying at home as much as possible.

“It has already been very difficult, I’m sure for many of you, especially kids who cannot play with their friends or a lot of the seniors who are graduating high school. The kids who want to go to the parks. Not being able to see your grandma or grandpa,” Breed said Monday.

But she warned again of not repeating the mistakes San Francisco made during the 1918 Spanish flu pandemic in lifting restrictions too soon, leading to a second deadly wave of flu cases.

“Folks threw off their masks and went out into the streets and partied and had a good time,” she said. “And a few days later, we were even worse off than when we started.”

Newsom said he expected to announce modifications to the stay-at-home order within a matter of weeks, while chastising people who flocked to the beaches in Ventura and Orange counties over the weekend.

“This virus doesn’t take the weekends off,” Newsom said during his daily COVID-19 briefing in Sacramento. “The only thing that will set us back is people stopping to practice physical distancing and appropriate social distancing. That’s the only thing that’s going to slow down our ability to reopen this economy.” 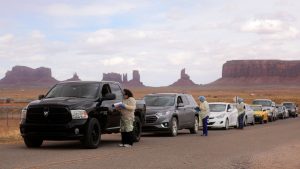