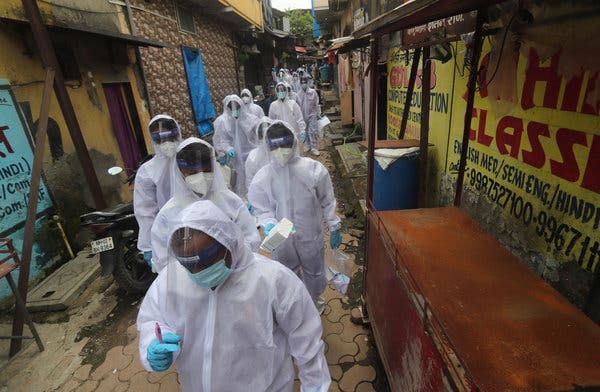 How deadly is the coronavirus? Scientists are searching for a definitive answer.

More than six months into the pandemic, the coronavirus has infected more than 11 million people worldwide, killing more than 525,000. But despite the increasing toll, scientists still do not have a clear answer to one of the most fundamental questions about the virus: How deadly is it?

A firm estimate could help governments predict how many deaths would ensue if the virus spread out of control. The figure, usually called the infection fatality rate, could tell health officials what to expect as the pandemic spreads in densely populated nations like Brazil, India and Nigeria.

In poorer countries, where lethal threats like measles and malaria are constant and where hard budget choices are routine, the number could help officials decide whether to spend more on oxygen concentrators and ventilators, or on measles shots and mosquito nets.

At present, countries have very different case fatality rates, which measure deaths among patients known to have had Covid-19. In most cases, that number is highest in countries that have had the virus the longest.

According to data gathered by The New York Times, China had reported 90,294 cases as of Friday and 4,634 deaths, a case fatality rate of 5 percent. The United States, which has had a record number of new daily cases six times in the past two weeks, was very close to that mark. It has had 2,811,447 cases and 129,403 deaths, about 4.6 percent.

Ten sizable countries, most of them in Western Europe, have tested bigger percentages of their populations than the United States has. Their case fatality rates vary wildly: Iceland’s is less than 1 percent, New Zealand’s and Israel’s are below 2 percent. Belgium, by comparison, is at 16 percent, and Italy and Britain are at 14 percent.

Before last week, the World Health Organization had no official estimate for the infection fatality rate. Instead, it had relied on a mix of data sent in by member countries and academic groups, and on a meta-analysis done in May by scientists at the University of Wollongong and James Cook University in Australia.

Those researchers looked at 267 studies in more than a dozen countries and then chose the 25 they considered the most accurate, weighting them for accuracy, and averaged the data. They concluded that the global infection fatality rate was 0.64 percent.

That percentage of the world’s population equals 47 million people, including two million Americans. 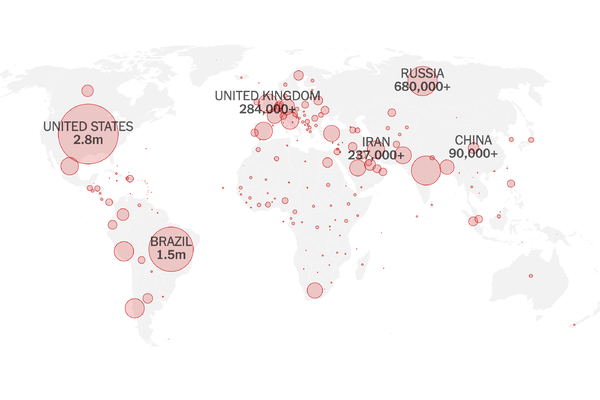 The virus has infected more than 9 million people and has been detected in nearly every country.

In Australia, thousands are told they can’t leave their homes, effective immediately.

The Australian state of Victoria has locked down nine public housing towers in Melbourne, its capital, telling about 3,000 residents that they must not leave their homes for any reason for at least five days.

The strict quarantine — which is the first of its kind in Australia during the pandemic and is being monitored by hundreds of police officers — started immediately on Saturday afternoon after 23 coronavirus infections were found in 12 of the towers’ households. Public health officials said everyone in the towers would be tested over the next few days.

“There is a lot of intermingling of the people between those towers for work, for family, for community events,” said Dr. Paul Kelly, Australia’s acting chief medical officer.

He called the towers “vertical cruise ships” with the potential to cause a major surge in cases at a time when Australia’s infections are already rising because of an outbreak across several Melbourne suburbs.

Some residents of the towers objected to being quarantined without notice. Abdi Ibrahim, who lives there with his five children, including 7-month-old twins, told The Australian that the lockdown had been imposed so quickly that it gave him no time to buy groceries for his family. He also had to cancel his Sunday shift at a logistics company.

As the towers were being locked down, officials also added two more Melbourne postal codes to the 10 others already under stay-at-home orders, affecting a total of more than 300,000 people. Unlike residents of the towers, people in these areas are allowed to leave their homes for work or education, exercise, medical care, caregiving or shopping for essential supplies.

Australia’s total case count remains relatively small, but public health officials have become increasingly alarmed by the outbreak in Melbourne. About 200 new cases emerged in and around the city over the past two days, a growth rate not seen since March.

An estimated 22,000 seasonal workers tend and harvest crops in New Jersey, nicknamed the Garden State for its robust agriculture industry. Many of these laborers follow the ripening crops up the Eastern Seaboard, starting in Florida, where migrant living quarters have been ravaged by the coronavirus, and working their way north to Maine.

Making life even more perilous, they have been deemed essential workers — exempt from stay-at-home orders and a 14-day quarantine rule in New Jersey for people coming from states where the virus is spreading quickly. Each influx of workers brings the risk of a fresh outbreak.

In New Jersey, 3,900 farmworkers had been tested as of Thursday and 193 were positive for the virus, according to the state’s Department of Health. Of these, 14 who had nowhere to remain isolated were placed into quarantine at a state-run field hospital at the Atlantic City Convention Center.

“It’s a little dangerous,” said Felix Nieves, 56, a supervisor at Atlantic Blueberry Company in Hammonton. The 1,300-acre farm is considered the biggest blueberry producer in the Northeast.

The first round of testing at Atlantic Blueberry was done early in the season, before most workers arrived. Three of the first 56 people tested were found to have the virus.

Atlantic Blueberry purchased 3,000 bandannas and gave each worker two — one to wear, one to wash — and hung fire-retardant cloth between beds in the dormitories where hundreds of laborers live during the season. The farm also bought additional buses to create extra space on the shuttles that run to and from the fields.

“Farming never stops,” Mr. Nieves said. “The fruit will not wait for this to pass.”

Voters endorse Toyko governor’s handling of the pandemic by re-electing her.

In rewarding Tokyo’s first female governor, Yuriko Koike, with a second term on Sunday, voters endorsed her highly visible leadership as the sprawling metropolis has avoided the kind of spiraling death toll from the coronavirus seen in other world capitals.

But a recent resurgence in cases in Tokyo has made clear that her challenge is far from over.

Even as Ms. Koike, 67, cruised to victory on Sunday, with exit polls by the Japanese news media showing her winning 60 percent of the vote, Tokyo reported 111 new infections, its fourth straight day over 100.

The creeping increase in cases has started to raise anxieties that the capital may have to reinstate elements of the nearly two-month state of emergency that it emerged from at the end of May. That growing caseload was felt in the election on Sunday, as voter turnout dipped below 35 percent.

During the emergency period, in which the government issued voluntary requests for businesses to limit operations and residents to stay home, Ms. Koike made herself the face of Tokyo’s response to the virus. She anchored near nightly news conferences to deliver daily test figures and advice on how to avoid infections.

In contrast to Prime Minister Shinzo Abe, who often appeared stiff in front of the news media, Ms. Koike was a much more relaxed presence when she appeared in conversation with Japan’s most famous YouTube star, Hikakin.

“Seeing her face on television every day made me feel comfortable,” Yuki Matsuura, 70, said as she voted in the Setagaya ward of Tokyo. “I think that she is doing the best that she can in a very difficult situation.”

For many of America’s struggling malls, the pandemic could be the final blow.

The standard American shopping mall was built around department stores. But the pandemic has been devastating for the retail industry, and many of those stores are disappearing at a rapid clip.

Some chains are unable to pay rent, prominent department store chains have filed for bankruptcy protection, and as they close stores, it could cause other tenants to abandon shopping centers.

Add to that the pressure that malls were already facing from online shopping, and analysts now say that hundreds are at risk of closing in the next five years. That has the potential to reshape the suburbs, with many communities already debating whether abandoned malls can be turned into local markets or office space, even affordable housing.

“More companies have gone bankrupt than any of us have ever expected, and I do believe that will accelerate as we move through 2020, unfortunately,” said Deborah Weinswig, founder of Coresight Research, an advisory and research firm that specializes in retail and technology.

“And then those who haven’t gone bankrupt are using this as an opportunity to clean up their real estate,” added Ms. Weinswig, who estimated that about 25 percent of the country’s nearly 1,200 malls were in danger.

Vince Tibone, a retail analyst at Green Street, said he was pessimistic about the ability of most malls to fill vacant spaces, especially during the pandemic. Entertainment options like Dave & Buster’s are off the table, for instance.

“The reality,” he said, “is there are going to be dark boxes for some time.”

Alarmed at China’s stranglehold over supplies of masks, gowns, test kits and other essential tools for tackling the coronavirus, countries around the world have set up their own factories to cope with both this pandemic and future ones.

When the outbreak subsides, those factories may struggle to survive. But China has laid the groundwork to dominate the market for protective and medical supplies for years to come.

Before the pandemic, China was already exporting more respirators, surgical masks, medical goggles and protective garments than the rest of the world combined, the Peterson Institute for International Economics estimated.

Beijing’s coronavirus response has only added to that dominance. It increased mask production nearly 12-fold in February alone. It can now make 150 tons per day of the specialized fabric used for masks, said Bob McIlvaine, who runs a research and consulting firm in Northfield, Ill. That is 15 times the output of U.S. companies even after they ramped up production this spring.

American companies have been reluctant to make big investments in fabric manufacturing because they worry that demand for masks will be temporary. Yet officials across the country are increasingly calling for the wearing of face coverings in public.

“It is a huge mistake,” Mr. McIlvaine said, “to assume that the market will disappear.”

How to discuss safety expectations with potential guests.

When it’s time to invite people over or arrange a play date, hosts face tough conversations with friends, neighbors and family on their standards for avoiding coronavirus infection. Here are some strategies to help. 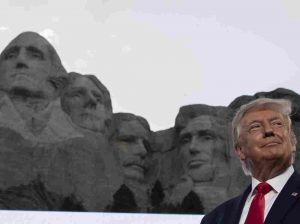 Despite Rising Coronavirus Cases, Trump's Focus Appears To Be Elsewhere 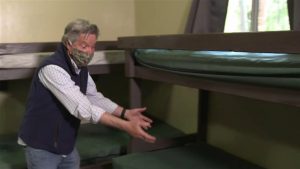 Keeping COVID-19 outside of camps is a near impossible challenge