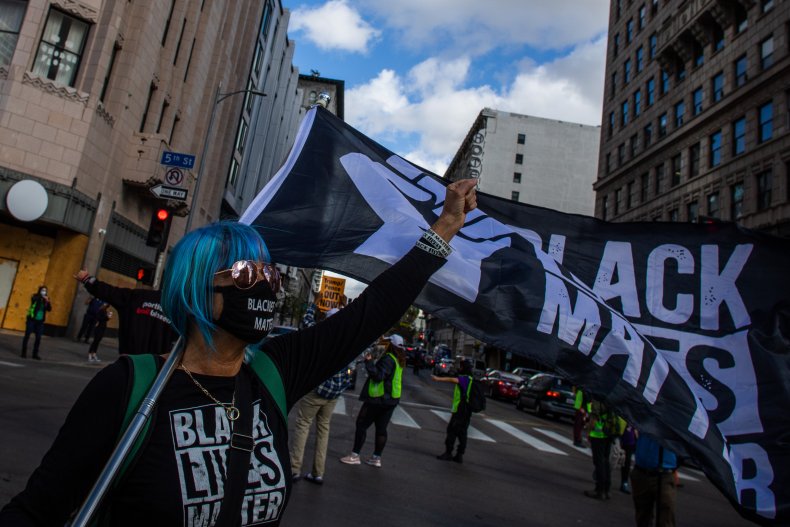 Black Lives Matter opposition to Los Angeles Mayor Eric Garcetti getting a cabinet job shows the group wants “a stake” in the administration of President-elect Joe Biden “because of the riots and unrest they have caused,” a conservative columnist has told Fox News.

On Friday, BLM members demonstrated outside Mayor Garcetti’s official residence for the fourth day running in a bid to dissuade Biden from appointing him to a top position.

Garcetti was co-chair of the Biden-Harris campaign and is said to be in the frame for the post of either secretary of transportation or housing and urban development.

But BLM protesters have criticized his housing record and said that he has not followed through on transportation projects. BLM-LA activists are also critical of how he has handled the Los Angeles Police Department’s budget.

In a segment on Fox and Friends on Friday, a tweet by BLM-LA was shown on screen highlighting the group’s opposition to Garcetti getting into the Biden team, which said: “We don’t want the worst mayor in the nation setting national policy.”

New York Post columnist Miranda Devine was asked to comment on what BLM-LA was saying about the mayor.

Devine said: “I think BLM obviously thinks that it has a stake in this administration probably because the riots and the unrest that they caused in the runup to the election… probably had something to do with the election result.

“So now they feel they have a stake in it. It’s kind of outrageous but that’s the way life is at the moment. I think that there probably would be a lot of L.A. residents however who would agree with them in this case,” she added, before discussing what hold the progressive wing of the Democratic Party would have on Biden’s top team.

Garcetti and his team have said that he is not looking for a cabinet job and that tackling the coronavirus pandemic was his priority. “I have been focused 110 percent on these numbers,” he told NBC Los Angeles.

After the U.S. election, one BLM leader, Patrisse Cullors, requested a meeting with Biden and Vice President-elect Kamala Harris, to “discuss the expectations that we have for your administration and the commitments that must be made to Black people.”

Biden is assembling his Cabinet team and inner circle of advisers. However Rep. James Clyburn has complained about the lack of Black candidates. He told The Hill: “From all I hear, Black people have been given fair consideration” adding, “but there is only one Black woman so far,” referring to Linda Thomas-Greenfield, set to serve as ambassador to the United Nations.