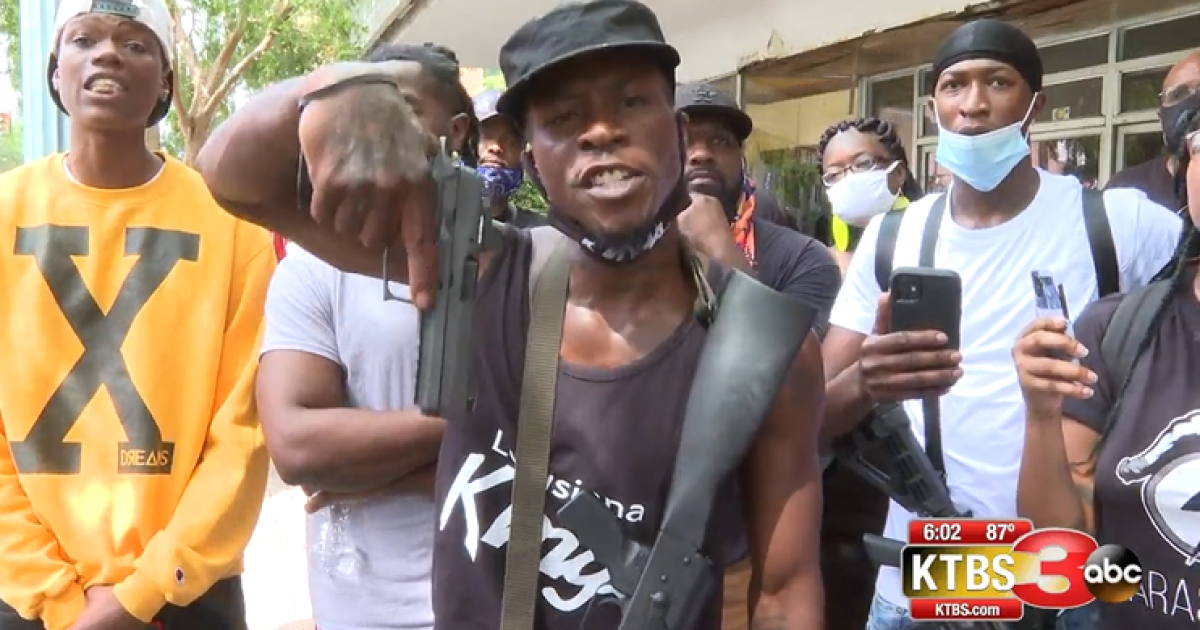 A group of Black Lives Matter (BLM) terrorists showed up at the Caddo Parish courthouse in Shreveport, La. on Tuesday to menace protesters who oppose the destruction of historical monuments.

The so-called Sleep Is For The Rich Gun Club demonstrated at the courthouse while holding weapons in an extremely thuggish fashion to intimidate their opposition. Police had a presence around the courthouse to make sure that they did not go on a rampage.

Nicki Daniels, Jr., the leader of the glorified terror cell, made his ignorance abundantly clear by giving an astoundingly low IQ statement to the media.

“Why are we still having to come out here to fight over a monument that, for people that fought against our country, bro?” Daniels said. “Y’all don’t understand the hypocrisy in that? And then you want to ask why we’re out here protecting these people? It’s about good versus evil, that’s why.”

Pastor Linus Mayes, who organizes the group Community Congress for Systemic Justice, made excuses for the terrorists who waved guns around at the protest. He demonstrated how so-called “peaceful” BLM protesters run cover for the rioters who commit mayhem in the streets.

“We don’t support violence. We’re against anybody committing violence,” Mayes said. “But we need to make a showing that if the Daughters of the Confederacy have their rights according to the first amendment, then we ought to be able to stand here with our guns as well to show that we will not be intimidated nor threatened.”

Caddo Commissioners have been leading the charge to remove a Confederate statue from Shreveport in order to appease the mob. However, the United Daughters of the Confederacy has filed a legal brief at least temporarily stopping the cowardly government officials from committing cultural genocide. Caddo District Judge Craig Marcotte has not given a time frame on when he plans to make his ruling.

Patriotic protesters may have to fight fire with fire in order to prevent the savages from raping America’s proud history.

Big League Politics reported on a group of patriots who stood their ground and refused to let the mob win in a Kentucky town:

On Friday evening, a group of armed patriots in Brandenburg, Ky. protected a Confederate statue as a Black Lives Matter mob was expected to gather and potentially deface it.

The mob has made a big deal of the 70 foot Confederate statue, which used to be located on the University of Louisville campus until 2016, as they continue their ongoing cultural genocide. The patriots of Brandenburg showed up to say no more to the ISIS-style movement of destruction…

WDRB reported that certain “business owners boarded up windows in anticipation of possible violence, but law enforcement officers from several agencies had kept the peace, at least through 10 p.m.”

These armed patriots made their stand as the left-wing cultural genocide has swept across America, with black dominance being projected through acts of mayhem nationwide.

The constitutional militia may need to make a return with government officials capitulating and hamstringing law enforcement while BLM runs wild. 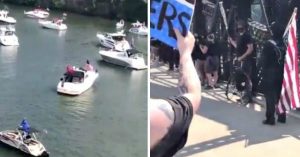