Members of the South Carolina National Guard arrive and walk through demonstrators protesting the death of George Floyd near the White House in Washington. | Alex Brandon/AP Photo

Pvt. Si’Kenya Lynch, a member of the D.C. National Guard, was on duty at Lafayette Square near the White House last Monday when U.S. Park Police cleared the area of protesters ahead of President Donald Trump’s now-infamous photo op.

Lynch said she supports the protests, and that her brother was among the demonstrators on the other side of the line, adding that “he coughed a lot” due to the tear gas fired into the crowd.

“I was happy to see him out there … to walk for me when I couldn’t,” she said, adding that if she hadn’t been activated as a citizen-soldier, she would have been among the protesters “to support the people, and I wanted to support what was right.”

POLITICO spoke to 10 National Guardsmen who have taken part in the protest response across the country since the killing of George Floyd while in police custody. Many Guardsmen said they felt uncomfortable with the way they were used to handle the unrest because demonstrators lumped them in with the police. They felt that while they swore an oath to uphold the Constitution, their presence at times intimidated Americans from expressing their opinions and even escalated the tension.

And in the case of Guardsmen involved in the Lafayette incident, some felt used.

“As a military officer, what I saw was more or less really f—ed up,” said one D.C. Guardsman who was deployed to Lafayette Square last Monday and who, like some others, spoke on condition of anonymity to speak freely. The official line from the White House that the protesters had turned violent, he said, is false.

“The crowd was loud but peaceful, and at no point did I feel in danger, and I was standing right there in the front of the line,” he said. “A lot of us are still struggling to process this, but in a lot of ways, I believe I saw civil rights being violated in order for a photo op.

“I’m here to support and defend the Constitution of the United States and what I just saw goes against my oath and to see everyone try to cover up what really happened,” the Guardsman continued. “What I saw was just absolutely wrong.”

Since the protest on Lafayette Square last Monday, much of the public’s attention has been focused on the decision to clear the area so Trump, flanked by advisers, could pose for photos in front of St. John’s Episcopal Church holding a bible.

In the days following, the debate shifted to whether the police used tear gas to break up the protests. The White House insisted they didn’t, yet a spokesperson for the park police later acknowledged to Vox that it was a mistake to be that definitive, since tear gas is an umbrella term covering a number of chemical irritants.

One of the Guardsmen at the scene said the White House isn’t being truthful.

“I’ve been tear gassed before. I was there the night before when we got tear gassed, there was tear gas there” on Monday evening, he said. He added that he and some of his soldiers felt the effects of the tear gas from their colleagues because they didn’t have masks on.

In a statement, Capt. Chelsi Johnson, a spokesperson for the D.C. National Guard, responded to accounts of Guardsmen who had been accidentally affected by tear gas.

“They were instructed to put their gas masks on if/when they were ordered to or they noticed the police were putting theirs on. Every Guardsman was issued a gas mask,” she said. The U.S. Park Police has acknowledged firing pepper balls into the crowd, which is also a chemical irritant.

While the Park Police cleared out the protesters, some Guardsmen said they felt they were there to actually prevent the police from beating up protesters, instead of the other way around.

“I felt that we were more protecting the people from the police,” said D.C. Guardsman Spec. Isaiah Lynch, who’s unrelated to Si’Kenya Lynch.

The event has taken a toll on some Guardsmen.

“We have a lot of National Guardsmen who are struggling with this, because unlike in combat when you have an enemy, these are our neighbors, our friends, our family,” the first Guard officer said.

The officer said he even told Gen. Mark Milley, the chairman of the Joint Chiefs of Staff, just before the Park Police moved in that the protests had been peaceful that day, a sentiment that was shared by three other Guardsmen who were there.

Rep. Max Rose (D-N.Y.), a Guardsman who was activated for the coronavirus pandemic but not the unrest, said using the National Guard during a peaceful protest for deterrence value “is not really the correct way” of employing the forces, which should instead be used as partners with local law enforcement and as a deescalating force.

Torrie Osterholm, the D.C. National Guard’s director of psychological health, said in an interview that many Guardsmen have reached out to her in the past week to express the pain and confusion they struggled with during and after the mission, both for what they witnessed and how the protesters reacted.

One Guardsman told her, “‘I never thought I’d get a bottle thrown at me and be told I should die and I should kill myself,’” Osterholm said. “There’s not enough Kevlar to protect you from those kinds of statements spoken in your own language.”

“I have some Guardsmen whose family members came out and criticized them. ‘What are you doing out here, aren’t you black?’” Walker said. “Of course, we’re all hurting. The nation is hurting.” 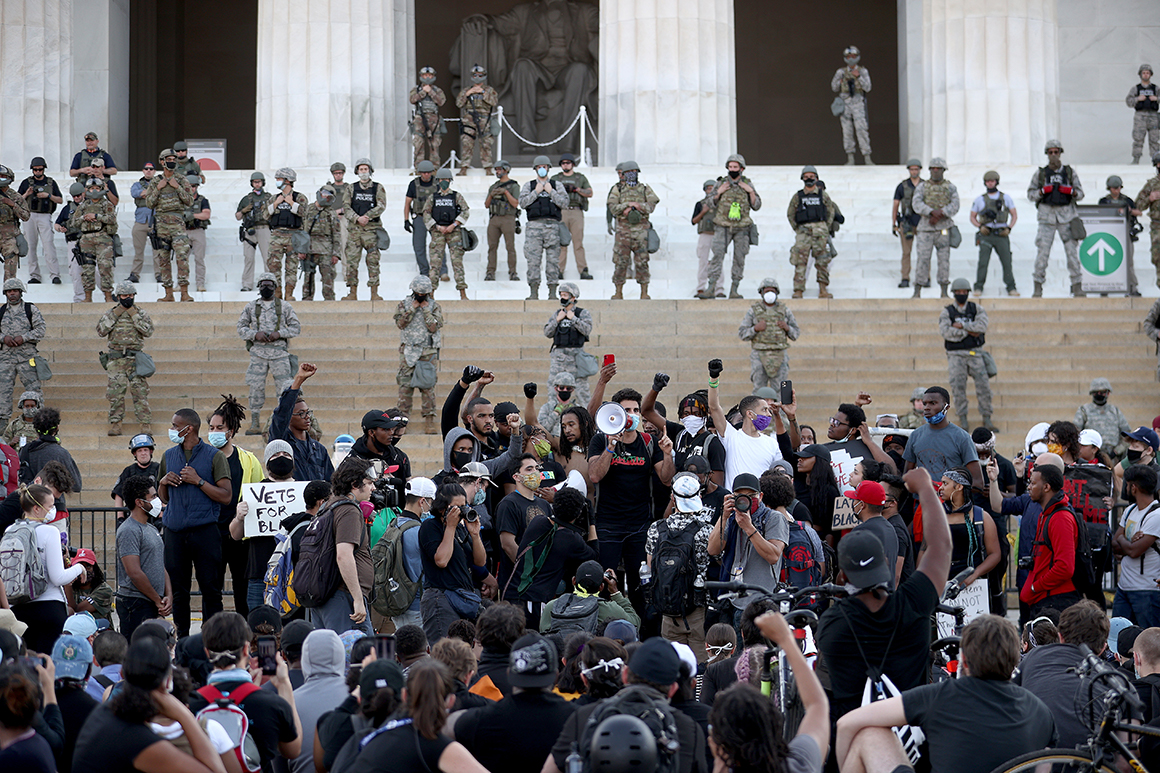 Members of the D.C. National Guard stand on the steps of the Lincoln Memorial monitoring demonstrators. | Win McNamee/Getty Images

But not all encounters were negative. Maj. Brent Mangum, who has been in the Utah National Guard for 17 years, said that during his week in D.C., a colleague who was wearing a wristband in memory of a fallen police friend had a warm encounter with a protester.

The protester asked him about the wristband and why he wore it. So he took it off and handed it to her, allowing the woman to read it.

“’Oh, so you’re hurting too?’ she asked,” Mangum recalled.

A change in attitude

One of the D.C. National Guardsmen said he was worried that a lot of the goodwill that the Guard has built up with local Washingtonians because of their coronavirus response and annual Fourth of July celebrations was in jeopardy.

“Within the span of 30 to 40 minutes, all of that washed away because of political stuff,” he said.

Osterholm said the Guardsmen were ill-prepared for the hate directed at them by the protesters, which was reminiscent of the anti-military sentiment during the Vietnam War. The shift from being viewed as heroes during the coronavirus pandemic to villains suppressing citizens’ right to protest happened overnight, she said.

Isaiah Lynch said that as an African American, he was called a traitor by some protesters who cursed at him, and also seen as an oppressor protecting the cops.

But he said a moment he would remember was when a man who had hit him with a brick the first day approached him a few days later to apologize.

“He shook my hand and told me, ‘Hey I’m sorry. Do you guys need any water or anything?’”

As of Monday, 42,700 National Guardsmen were deployed across 34 states and D.C. to deal with protests. At the height of the response last week, 1,200 D.C. National Guardsmen and another 3,900 from 11 states were patrolling the nation’s capital. Defense Secretary Mark Esper gave the order for the out-of-state Guardsmen to begin leaving on Friday; all are expected to return home by Wednesday.

Guardsmen across the country have tried to signal to Americans in the streets that they’re on their side in several ways, including some taking a knee, giving water to protesters, giving fist or elbow bumps, and even dancing the Macarena in Georgia in a video that went viral.

But while they’ve worked with local police, a number of them expressed disdain for how the police have conducted themselves.

“The police had lost credibility and a considerable amount of ground within their city so we were a last ditch attempt to try to stop the bleeding,” said Capt. Maggie Gregg of the Minnesota National Guard. She commanded a group of about 75 cooks, mechanics, medics and even some HR professionals to provide security in south Minneapolis after riots had broken out a few days after Floyd’s death.

Capt. Richard Gilberti, a Nevada Guardsman, said at first he was nervous and unsure about how Reno residents would react to armed soldiers in uniforms on American streets. He worried about whether some people were going to be hostile to him and his fellow soldiers. But pretty quickly, he could tell that most people were happy they were there after the city had been hit with looting and vandalism.

“We’re here to make sure everybody can exercise their constitutional rights safely,” he said, adding that soldiers were reminded that “these are all U.S. citizens, all Nevadans, just like us, so treat them accordingly.”

Other Guardsmen who were activated during the protests and unrest said they felt they were being “weaponized” against fellow Americans.

“The message that was being conveyed to the public was that we were placed to be another weapon. We were placed there for scare. We were the scarecrow,” said Gregg, who noted that some soldiers responding to the Minneapolis protests were assigned to ride along in ambulances largely for “shock value,” which evoked mixed feelings.

Because many Guardsmen are young, “their friends were out there protesting but they were here and they were being made to feel like they were part of the problem instead of being part of the solution,” Gregg said.

She said that the National Guard’s presence in the community may have even caused more unrest the first night they were deployed. Some local Minneapolis residents, she said, were more upset before they realized that the Guard had been called up to help protect the community, instead of crack down on the protesters.

“It was hard for people to wrap their heads around the idea: how are you helping us if you have weapons and ammunition?” Gregg said.

Lara Seligman contributed to this report.