CHARLOTTE, NC – A police captain from the Charotte-Mecklenburg Police was assaulted on June 8th while outside of the Charlotte Government Center in uptown where protesters had reportedly gathered.

The officer involved is Captain Brad Koch, who was surrounded by a crowd of protesters that were engaging in not only antagonistic behavior, but escalated to assault.

Video of the incident was captured, where the group encircled the police captain in a fit of rage outside of the government building.

This video shows Capt. Brad Koch being assaulted in broad daylight today by protestors at the Char-Meck Government Center. CMPD is attempting to identify the suspects in this case. If you have any information please contact 9-1-1 or call @CLTCrimeStopper at 704-334-1600. https://t.co/FTn9EPLmwM

In the video, you can see some rising tensions boiling among the group of protesters present. Then, one individual allegedly shoves the police captain, resulting in the captain trying to take down the suspect. The group then converges on Captin Koch, essentially in a manner that can only be described as dog-piling.

One individual present can be seen warding off the group and shoving those attempting to pile onto the officer. It is unknown whether the person assisting was an officer in plain clothes, or just a demonstrator assisting the Captain Koch.

While the scuffle in question did not result in any grievous injury of any sort, one arrest was commenced seemingly in relation to the incident that played out.

Shortly after the protestor scuffle with @CMPD’s Capt. Brad Koch a group of bicycle officers made an arrest outside the courthouse @wcnc pic.twitter.com/yDuuDn8DvW

Police were said to have arrested 27-year-old James Marciano and charged the suspect with assault on a government official, as well as disorderly conduct and resisting arrest.

LET has a private home for those who support emergency responders and veterans called LET Unity.  We reinvest the proceeds into sharing their untold stories. Click to check it out.

Police getting attacked on camera is unfortunately becoming more commonplace as of late.

In New York City, a video has surfaced online that showcases a police officer, said to be among the Bronx area, getting attacked by three individuals. The officer was on the ground, while people were filming and screaming expletives at the officer being assaulted.

The hatred being shown toward police now is getting far beyond out of hand, as the blatant violence is continuing to rise seemingly with every instance and encounter.

This video, that was shared by the Sergeants Benevolent Association online, is just another example of what officers in major cities are actively dealing with during these “peaceful” protests.

NYPD Cop attacked in the Bronx. I guess the critics will now say he overreacted. NYPD Cops defend yourselves, you are alone! pic.twitter.com/424w5bZbC6

The video shows what looks to be one person holding the officer down, while someone runs up with some unidentifiable large object and hurls it at the grounded officer. That assailant then runs off on foot, but the person whom the officer was engaged with is still holding him to the ground.

Then, another individual quickly runs up to where the officer is on the ground, and retrieves the same said item thrown earlier at him and slams it down on the officer.

During the assault, you can hear the likes of “fuck 12” being shouted. The 12 is in reference to the police drag unit, but is typically interchangeable with expression like the more widely known “fuck the police”. The anti-police sentiments have been clearly made, and it seems the only thing the mainstream media can be outraged about is President Donald Trump holding a bible.

The riots and looting taking over New York City has also caught the attention of New York Governor Andrew Cuomo, who is now criticizing Mayor Bill de Blasio for not having increased the police presence within the city:

Apparently, Mayor de Blasio thinks that the peaceful protesters were doing a bang up job when they “rejected” the rioters from participating among their demonstrations:

“There were peaceful protesters who rejected the violent elements and forced them out of protests. There were elected officials and clergy who said to people, ‘If you’re going to protest in our community it must be peaceful. If you attempt any violence, we will reject you.’ That ultimately is the big story here.”

Obviously, it’s not as though the violent criminals just went home when they were ousted from joining the peaceful demonstrations. They simply decided to go and engage in their crimes wherever they pleased – as evidenced by numerous videos of incidents cropping up.

Another aspect, compliments of de Blasio, that didn’t help was the extremely late curfew enacted. While many states and cities have been seeing 8:00 p.m. curfews go into effect , the mayor thought that an 11:00 p.m. curfew would be just fine.

It wasn’t the mayor received enormous pushback on his original curfew that he amended it to begin at 8:00 p.m. on June 2nd.

These protests have power and meaning. But as the night wears on we are seeing groups use them to incite violence and destroy property.

Our first priority is keeping people safe, so I’m extending the curfew to Tuesday. It will begin at 8pm.

Several videos showed the chaos that played out on the evening of June 1st, with one instancing of looting being caught by police where they can be seen taking an individual into custody.

NYPD officers arrest a looter who was vandalizing a store while other rioters wait outside. Dangerous situation here. pic.twitter.com/O6EncYfh5M

In other video, you can see the decimated state of a Verizon store located on East 43rd Street and Madison Avenue in Manhattan. The interiors look to have been completely looted of any product located on the shelves. The glass windows shattered to pieces all over as well.

People online have been highly critical of the worsening situation in New York City, and also the double standard that has been showcased in relation to how the mayor approached COVID-19 versus these current demonstrations.

So @BilldeBlasio and @NYGovCuomo Kept New York city on lockdown for two months, didn’t let people go to work didn’t let people see their families but now when people want to riot and destroy their city they won’t even call in the National Guard. this is why [email protected]

And just like that, COVID was no longer a thing being enforced it seems, and riots are taking over the city. So much for de Blasio’s harsh stance about cracking down on large gatherings. 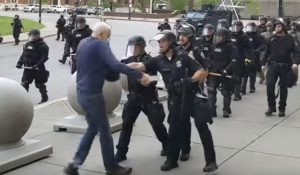