U.S. Hits 2 Million Coronavirus Cases As Many States See A Surge Of Patients 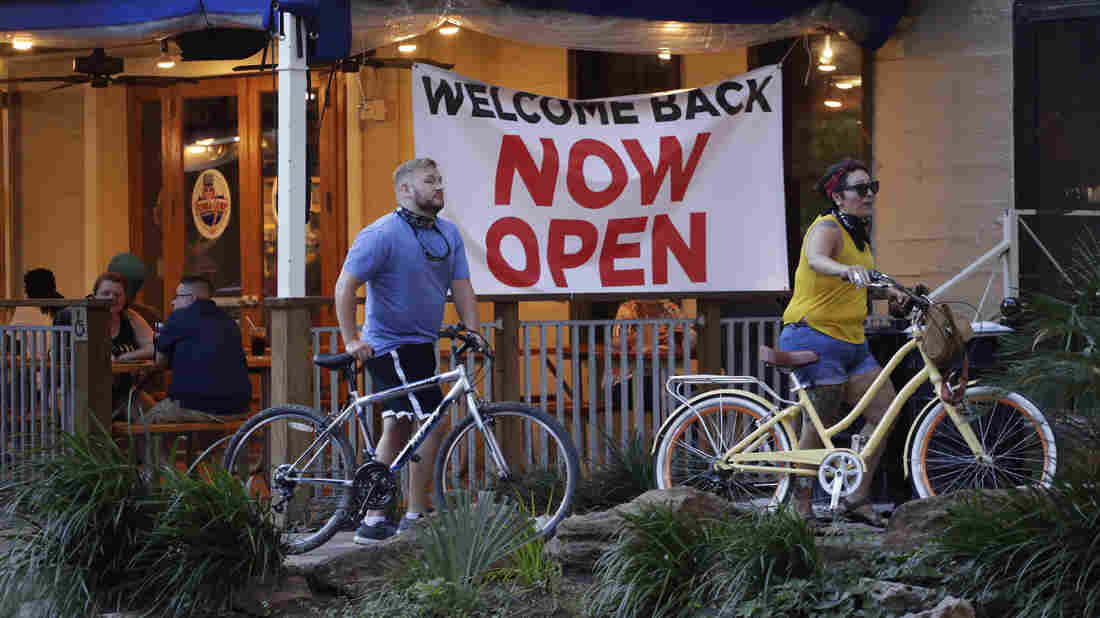 Visitors to the River Walk pass a restaurant that has reopened in San Antonio, Texas, on May 27. Texas continues to reopen in the wake of the COVID-19 pandemic. Eric Gay/AP hide caption

The U.S. has reached another dire landmark in its fight against COVID-19, surpassing 2 million confirmed cases on Wednesday. New coronavirus infections are rising in at least 20 states, even as restrictions on daily life continue to ease across the country.

More than 112,000 people have died from COVID-19 in the U.S. — the most fatalities reported by any nation, according to a tracker from Johns Hopkins University. And most experts believe those numbers underestimate the true toll.

The latest data also reflects the difficulty of quashing the coronavirus. While some early hot spots such as New York state have seen a sustained drop in new cases, COVID-19 hospitalizations have swelled recently in places like Texas, Arizona, Arkansas and California.

Texas set new records for COVID-19 hospitalizations on three consecutive days this week, with a total of 2,153 hospitalized patients on Wednesday. The state was among the first to start the reopening process, and Gov. Greg Abbott is moving forward with plans to raise occupancy limits for bars, restaurants, amusement parks and other businesses.

Florida is seeing its own new surge, with more people testing positive for the coronavirus on Saturday than any day in the past two months. Since June 2, the state has reported more than 1,000 new cases every day, even as the number of COVID-19 deaths has dropped to double-digits.

Arizona has reported an average of more than 1,000 new cases every day this week — the highest per capita rate in the U.S. Underscoring the crisis, the health department said Tuesday that only a quarter of the state’s beds in intensive care units are currently available.

Public health experts say these surges should not be dismissed as a result of more testing. 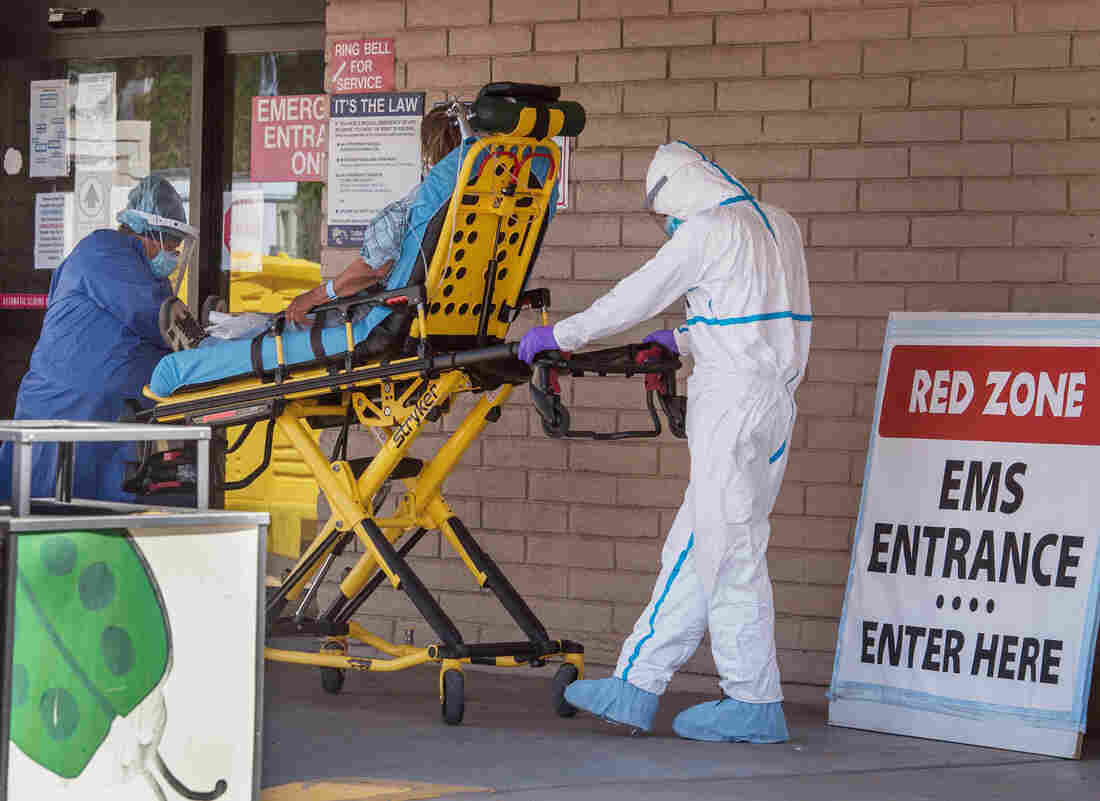 A patient is taken from an ambulance to the emergency room of a hospital in the Navajo Nation town of Tuba City, Ariz., on May 24. Weeks of delays in delivering vital coronavirus aid to Native American tribes exacerbated the outbreak, according to Navajo Nation President Jonathan Nez. Mark Ralston/AFP via Getty Images hide caption

The national numbers remain stubbornly high. Often, when one state gains a measure of control over COVID-19, another seems to report a new spike.

Even in states with smaller overall numbers of cases, such as Oregon, South Carolina and Alaska, the rate of new infections has risen by more than 100% in the past two weeks. That is driving concern that the loosening of virus controls is driving a second wave.

All 50 U.S. states had begun easing their restrictions as of last month. By early June, only a few states still had stay-at-home orders in place. And Americans have eagerly returned to some of their old routines — a development backed by cellphone data.

The data suggest people in the U.S. are moving around at a level that’s up to about two-thirds of what it was before shutdown rules were implemented. This supports the idea that the new increases are real, not just a result of more testing. Since late May, thousands of people have left their homes to go back to work, to shop, to socialize and visit bars and restaurants. And that’s how the virus can spread. 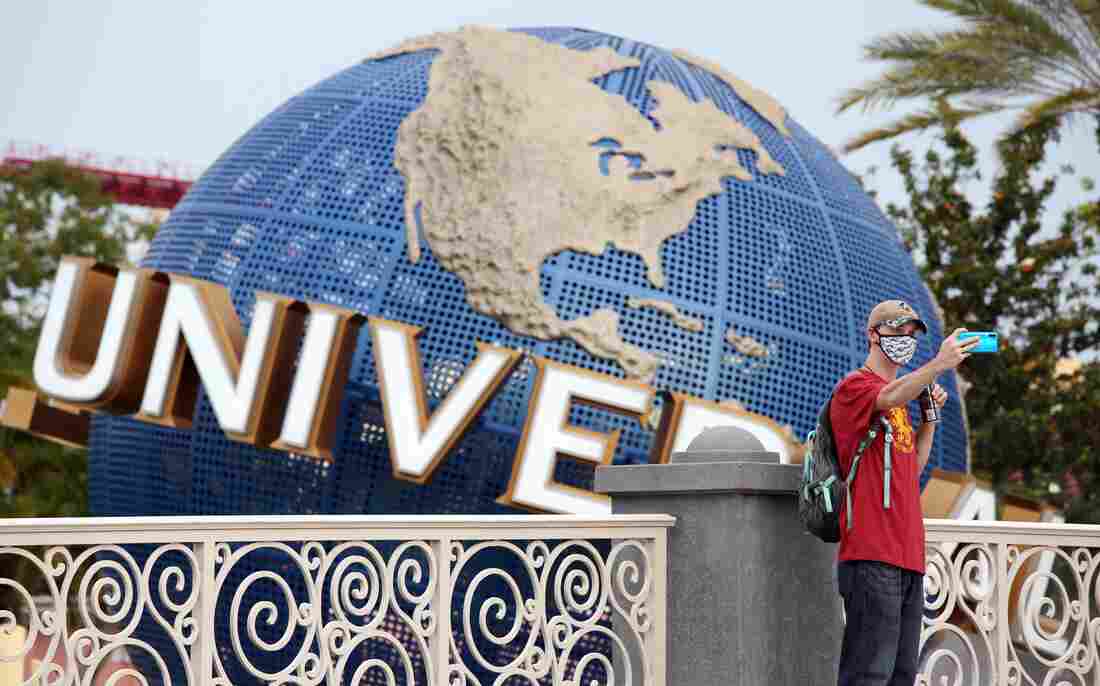 A visitor takes a selfie at Universal Studios theme park on June 5, the first day of the park’s reopening during the coronavirus pandemic in Orlando, Fla. Gregg Newton/AFP via Getty Images hide caption

As states continue to loosen limits, health experts are urging people not to become complacent — to follow habits that help to slow the coronavirus, such as washing hands, maintaining a physical distance of at least six feet from others, and wearing a face mask when in close contact.

“It seems that we, the U.S., has given up and accepted this disease as a facet of life,” says Jeffrey Shaman of the Columbia University School of Public Health. “It didn’t have to be this way, and it still doesn’t going forward.”

The national tally of 2 million cases includes nearly 525,000 people who have recovered from the disease. But the U.S. total represents more than 25% of the world’s cases — an outsize impact on a country with less than 5% of the world’s population.

It’s a drastic change from March, when 90% of the world’s COVID-19 cases were reported in just four countries: China, Italy, Iran and South Korea.

Since then, the pandemic has hit the U.S. hard. And with states now pushing to return to normal, public health experts are concerned.

“I’m definitely worried,” says Dr. Bill Miller the senior associate dean for research at Ohio State University’s college of public health. “As places have been opening up, many people are taking it as a message that everything is OK and back to normal.”

He adds: “I’m definitely worried that we’re going to see some upswings, maybe not everywhere, but in many places across the country.” 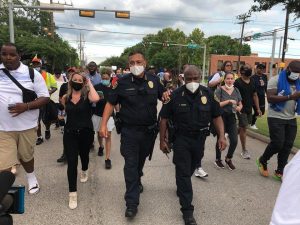 George Floyd Protesters Seek a 'Diverse' PD — But Will That Matter? 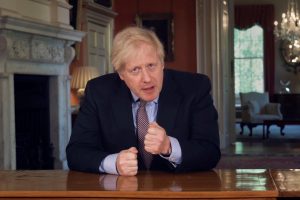