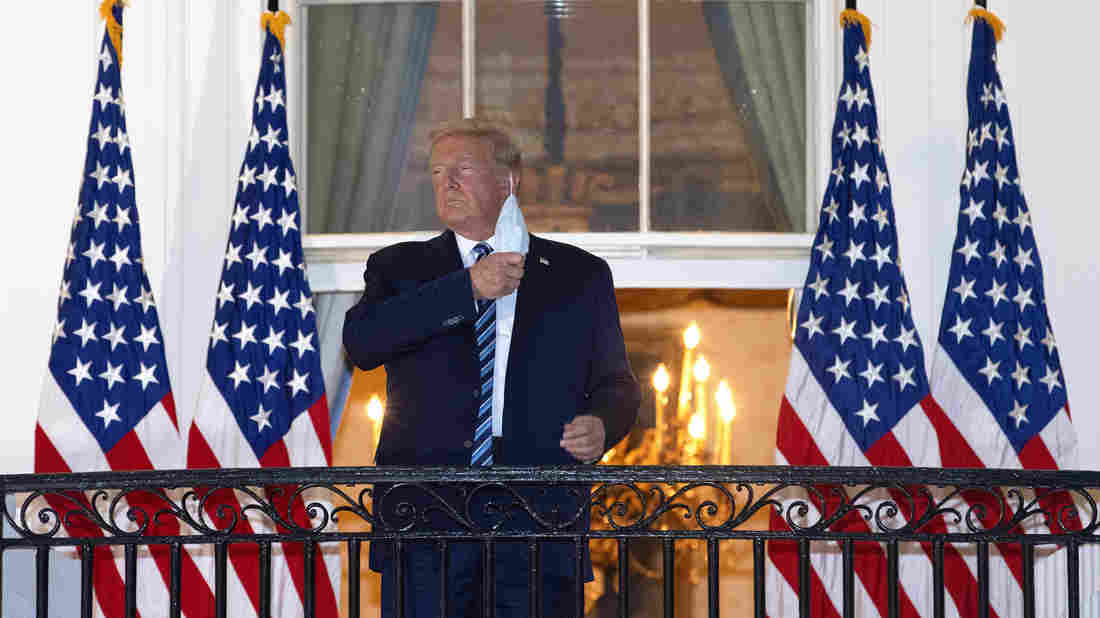 President Trump is seen removing his mask upon his return to the White House from Walter Reed National Military Medical Center on Monday, days after he tested positive for the coronavirus. Win McNamee/Getty Images hide caption

President Trump on Wednesday boasted of his improved health in a video posted to Twitter, calling his coronavirus diagnosis “a blessing from God.”

The president’s video address is one of several he has posted to the social media site in the days since he was admitted to and ultimately released from Walter Reed National Military Medical Center in Bethesda, Md.

Trump has undertaken a number of treatments for the virus, including Remdesivir, the intravenous antiviral medication, and a single dose of Regeneron’s experimental antibody cocktail.

“They call them therapeutic, but to me, it wasn’t therapeutic. It just made me better. OK? I call that a cure,” Trump said.

A MESSAGE FROM THE PRESIDENT! pic.twitter.com/uhLIcknAjT

While more than 200,000 Americans have died so far from the coronavirus, Trump referred to his own experience as a “blessing.”

“I think this was a blessing from God that I caught it. This was a blessing in disguise. I caught it, I heard about this drug. I said ‘Let me take it’ — it was my suggestion, I said ‘Let me take it.’ And it was incredible the way it worked. Incredible,” Trump said in the Wednesday Twitter video, vowing that the drug would be free and that he would make China “pay a big price” for the virus having made its way to U.S. shores.

“I want everybody to be given the same treatment as your president because I feel great, I feel, like, perfect,” he said.

Shortly after the video landed on Twitter, White House chief of staff Mark Meadows said on Fox News that two therapeutic treatments for COVID-19 have been submitted to the FDA for emergency use authorization. “Two of them were put in for EUA today,” he said. He did not provide further details.

The drug company Lilly did file for emergency use authorization Wednesday for one of its antibody treatments; Regeneron wouldn’t confirm that they have applied.

The drugs referenced by Trump have only been available in very limited circumstances. The clinical evidence in support of the drugs is preliminary, perhaps enough to support emergency use but short of the level needed for a full-blown approval by the Food and Drug Administration. Questions about effectiveness and safety remain.

Trump’s contraction of the coronavirus, which causes the illness known as COVID-19, upended Washington politics just weeks before a contentious general election race for the White House and key congressional seats.

In addition to the president, nearly two dozen close White House contacts, including the first lady, have tested positive for the virus since Friday. The burst of cases forced into the spotlight the administration’s handling of the virus, as well as Trump’s general downplaying of the pandemic and his undermining of conventional health guidance to wear masks and avoid crowds to help slow the spread of the virus.

Many of those in Trump’s close contacts who recently contracted the virus also attended a Sept. 26 event held at the White House Rose Garden to announce Trump’s nomination of Judge Amy Coney Barrett to the Supreme Court.

But Trump and others have been at a flurry of events in the last couple weeks, given the crucial time in the campaign. 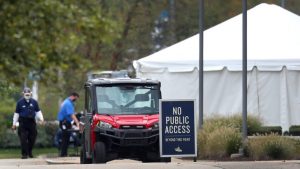 The Patriots and Chiefs shouldn't have played Monday. The NFL is to blame for what happens next.