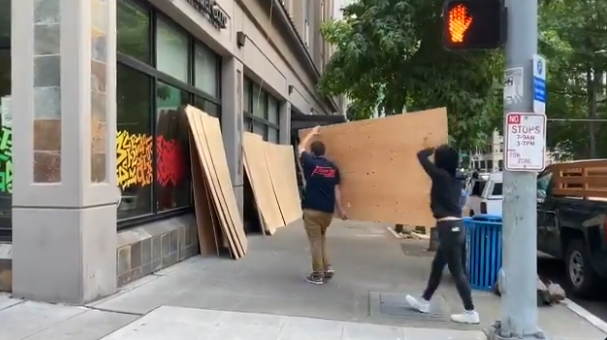 The Seattle Police Department announced on Friday that residents and business owners are essentially on their own, after the City Council banned the use of pepper spray and other ‘less lethal tools’ to disperse crowds.

“Simply put, the legislation gives officers NO ability to safely intercede to preserve property in the midst of a large, violent crowd,” reads a letter from Seattle Chief of Police, Carmen Best – who added that thanks to the City Council, “Seattle Police will have an adjusted deployment in response to any demonstrations this weekend.”

The Seattle police chief is sending out letters telling residents: “We cannot enforce the law. You are on your own.” pic.twitter.com/89jyezSBMS

And in anticipation of violent weekend protests coordinated over social media platforms (which ban conservatives for mean words), Seattle business and police have been boarding up.

.@SeattlePD West Precinct, also SPD HQ, has boarded up their windows and brought in cement barriers to keep “peaceful” protesters from vandalizing and breaking-in. pic.twitter.com/WhMgKhYcpz

The Portland-based Pacific Northwest (PNW) Youth Liberation Front – which describes itself as a “decentralized network of autonomous youth collectives dedicated to direct action towards total liberation,” has issued a call to action for other Antifa cells across the country on Saturday – calling it “J25” (July 25).

In a Facebook ‘call to action,’ the anarchist group writes:

The Federal Government has already waged war against Portland, which has been protesting everyday for 50 days straight, and now feds are going to war against protesters everywhere in an attempt to take control and snuff out the fire of this uprising. We must become more powerful than them.

Meanwhile, Antifa protests are already heating up across the country after demonstrations began on Friday night:

This Antifa guy stabbed someone in Portland earlier this morning, prompting a police response and his arrest. pic.twitter.com/b0UBqnXJaX

Antifa militant and convicted pedophile David Blake Hampe was arrested in the early hours of Saturday following his alleged stabbing of a black Trump supporter in Portland.https://t.co/WqsB6OS1Xo

Another huge crowd tonight in Portland, including a new “wall” on the front lines: a Wall of Vets.

Here’s a look at the line of military veterans getting set up here in front of the federal courthouse. Behind them, the Wall of Moms and the Wall of Dads are arriving. pic.twitter.com/gGnXHjI3k2

The feds come out shooting pic.twitter.com/oWQtx9crAR

“Fuck you I won’t do what you tell me” #portlandprotests day 58 pic.twitter.com/jLnySFSBdD