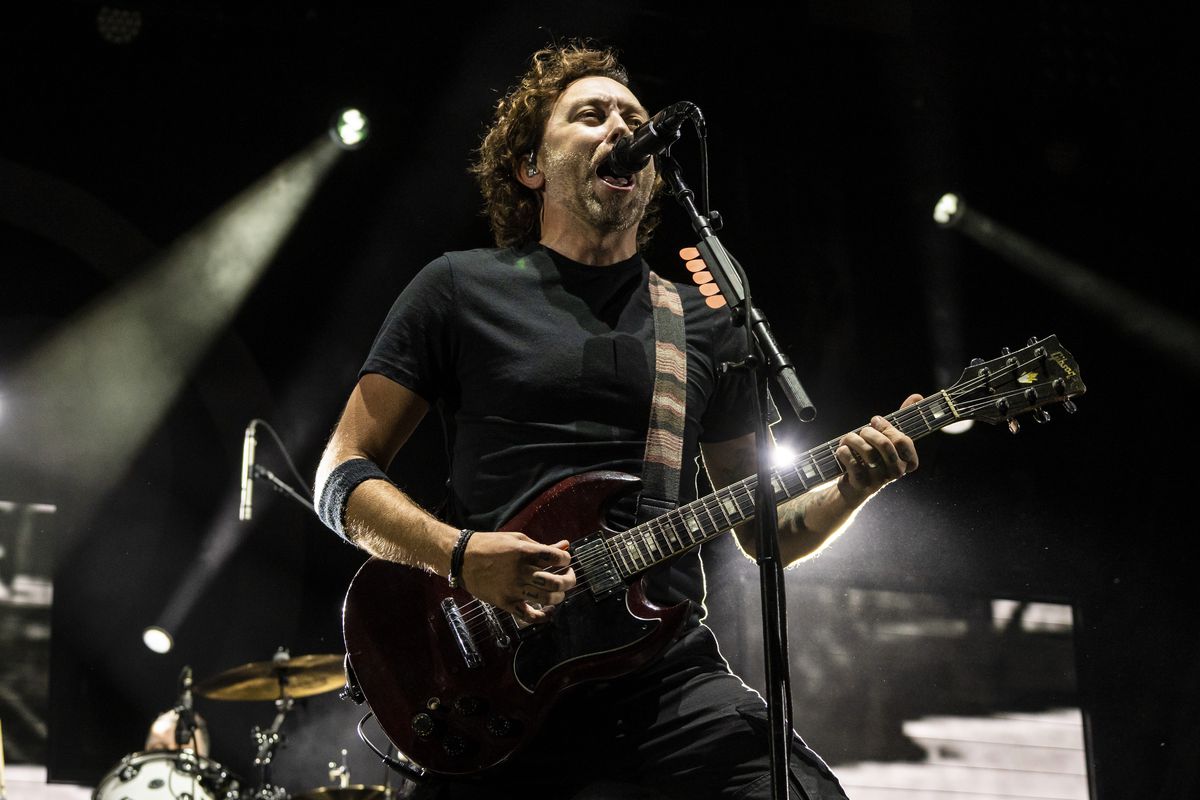 From the mayhem and art punk of Les Savy Fav and the gorefest of Gwar, to the hope-filled rhymes of Vic Mensa and the high energy of Gogol Bordello’s gypsy punk, the party in the Park — Douglass Park — offered up plenty of excitement if not controversial moments.

Rise Against wasn’t supposed to be at Riot Fest this weekend. A few days ago the local punk act was announced as a last-minute sub-in for Faith No More, who regrettably had to cancel their tour and appearance at the fest so singer Mike Patton could take time for his mental health.

Rise Against singer Tim McIlrath acknowledged their huge absence, dedicating Saturday night’s set to the band and Mike, and then proceeding to launch into a rollicking set that shows why the quartet is always welcome at the event.

On a current short tour to promote their latest effort, “Nowhere Generation” (making a stop at Northerly Island just a couple weeks go), songs like the title track were anthemic crowd-pleasers that spoke directly to their young fan base that often feels “invisible” in the world today, said McIlrath.

The new material stood up well against their venerable catalog with songs like “Help Is On The Way” and “Ready To Fall” particular hot spots of the set. McIlrath also used the time on stage as a platform to spread local love, encouraging out-of-town visitors to come back often and reminiscing about making the video for the 2004 song “Give It All” on the Brown Line. He also gave a nod to the many other local bands on the Riot Fest lineup this year, among them Alkaline Trio and The Smashing Pumpkins. That’s the thing about Rise Against though — no matter how huge they get (and they’ve definitely reached that coveted top echelon in the industry), they always manage to remain humble and bring an intimacy to their shows that makes it still feel like you’re still seeing them at the Fireside Bowl. And much like Riot Fest itself, the band is a great representation of a homegrown affair that so carefully holds on to its roots.

The highlight of the set was a unique cover of Creedence Clearwater Revival’s “Fortunate Son” with Damian Abraham of the Canadian punk band F***ed Up adding a guttural howl that amplified the wartime message of the song. It was the one chance to see Abraham this weekend — the band was supposed to play the fest but their drummer was unable to get into the country — and he used the time well.

Even Gogol Bordello frontman Eugene Hutz seemed to be in awe of the “Chicago choir” that came out ready to lend their voices to the gypsy punk’s high-energy takedown.

A Riot Fest favorite, the jumbo-sized ensemble that is Gogol Bordello expertly melds together ages-old Eastern European musical traditions with ballsy punk rock and a bit of folk-country, making many in the crowd wonder if they should waltz, mosh or start a hoedown. But as is the true ethos of punk, anything goes and it did in this energetic bonanza.

Around since 1999, the eclectic New York-based band with members from around the world, celebrated their latest album “Lifers” with their banner art while delivering fan favorites like the early career hit “Start Wearing Purple” that woke up the Riot Fest masses from a midday slump. The whole performance came off as one big party, with Hutz at one point swigging from a bottle of red wine that spilled down his jacket decorated with patches of The Clash, System Of A Down and the NYPD.

The attention equally turned to other members in the communal project with violinist Sergey Ryabtsev in particular demanding many turned eyes as he bared down on his instrument like he could have been wielding an electric guitar in his own solo. Those seeing them in their intimate after-show tonight at Concord Music Hall are in for a treat.

Chicago rapper Vic Mensa proved why he remains one of the best in the scene today by going back to the beginning of it all in the hometown appearance at Riot Fest.

Offering a very rare album set of his debut mixtape “Innanetape,” the Hyde Park native took time to reflect on his origin story as a solo artist, talking about the place he was in his life when he made it in 2013, shortly after his genre-defying group Kids These Days broke up, as well as his personal motivation for wanting to be an artist.

“I wanted to talk about the man pushing the shopping cart on 47th Street with all his possessions, why life was like that for some while Obama five blocks away was the president,” he noted.

Blasting hip-hop’s materialistic and clout-filled nature, he added, “You can lose sight but practicing this album reminded me of what to be striving for.”

Mensa (wearing Rage Against The Machine’s infamous Che Guevara shirt) bounced around in the album order, but, accompanied by a live band, sold it on tracks like “Tweakin” (which features Chance The Rapper on the recording), “Lovely Day,” and “Holy Holy,” a song he wrote in memory of his brother Cam who was murdered when he was 17.

Gun violence has long been a focal point for Mensa as has police brutality, often using his music as a magnifying glass to larger societal issues. Earlier in his set, Mensa unleashed his powerful track “16 Shots” (inspired by the death of Laquan McDonald) that brought people across the park to his performance. Though the real draw was when he handed out free weed to the crowd, saying it was from his own upcoming handcrafted line that he claims is the first Black dispensary in Illinois.

Ending the set with his gripping anthem “We Could Be Free,” it’s a great example of how Mensa continues to imbue hope within his message, even when talking about some of society’s darkest moments.

Early Saturday at Riot Fest was the battle of who could bring the better performance art — and it was quite the matchup. Though it was not raining, the poncho army came out for scuzzy intergalactic provocateurs Gwar.

They started things off like they usually do with a big old bloodbath, their first victim being an impersonator of President Joe Biden, though sounding a bit more like JFK or George W. Bush. He mockingly touted his recent accomplishments, including a comment about ending the war in Afghanistan, quickly followed by an actor dressed as a member of the Taliban “beheading” him to get the blood Olympics going.

Gwar may best Andrew W.K. now as the band that has played Riot Fest the most over the past 15 seasons, and the droves always come out for their uncensored satirical theater that combines elicit eighth-grade boy humor and a bunch of tomfoolery that makes a commentary on the current day’s political environment. This set focused its gaze on the pandemic and mask-wearing for a good chunk while the music honed in on their best-selling 1990 sophomore album “Scumdogs of the Universe,” still in the midst of a 30-year anniversary tour. Though the group doesn’t carry the lineup it did in that era, the current band delivered the goods on “Maggots,” “Sick Of You” and “Death Pod,” which frontman Blöthar the Berserker declared hadn’t been played in quite some time.

Les Savy Fav was another showstopper that has the corner on immersive art punk and physical comedy. Whereas some bands might rely on minimalism in their performances, frontman Tim Harrington is of the belief that everything and anything can be used as a prop or vessel for his show — like a folding table that became a crowd surfboard, or a large black tarp that was commissioned as a giant blanket to roll around in over the heads of the gathered fans.

Harrington is not only a master of the bizarre but he’s also incredibly engaging with his audience, like a comic who knows just who to pick out to become part of his routine. During the set, the singer stole sunglasses off people’s faces, spit water all over another person’s head (assuring it was no big deal since he’s “fully vaxxed”), made a headband out of pink gaffer’s tape plucked from the sound booth and then, best of all, spotted a person holding a mannequin head with a wig that Harrigton then turned into a tail and proceeded to ride a fan like a horse in the photo pit.

Behind him was a solid assortment of musicians that delivered the soundtrack to the escapades with buzzy post-hardcore bangers like “Hide Me From Next February” and “Hold Onto Your Genre.” Harrington’s body warpaint, fully visible when he stripped down to his underwear, was also a colorful display, but perhaps best of all were his temporary tattoos paying homage to a Chicago red hot on his back and the words “deep dish” above his knees.

Check back soon for more. 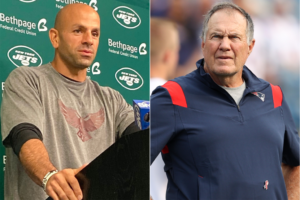 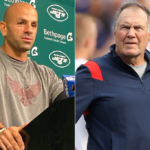 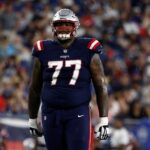 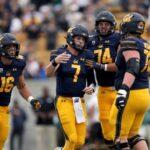 Dozens of protesters gather for anti-vaccine rally in front of L.A. City Hall, no problems reported