According to the mandate, members of the fire department, the New York Police Department and other city workers have until 5 p.m. Friday to have proof that they’ve received at least one dose of vaccine or be placed on unpaid leave.
On Thursday, members of the FDNY opposed to the mandate crowded outside Gracie Mansion, the mayor’s official residence, to demonstrate, with some attendees carrying signs that read, “Essential Workers aren’t Disposable Heros (sic),” “My Body My Choice,” and “#Natural Immunity.”
“In 21 years, we’ve been through the Trade Center, hurricanes, Covid, and just to come out and put this mandate on in such a short period of time, it’s just not right,” said Julian Eyre, who told CNN he’s choosing to retire after 21 years with the fire department rather than get the vaccine.
“I’ve been working a year and a half with Covid, I haven’t gotten sick, I haven’t tested positive. I’ve been healthy the entire time. I don’t feel that I need the vaccine to survive,” Eyre said, adding he’s concerned about health risks stemming from the vaccine.
About 64% of the city’s firefighters were vaccinated, Mayor Bill de Blasio said in a news conference Thursday. The New York Police Department’s vaccination rate sat just below 75%, and the city’s emergency medical services staff were 74% vaccinated, the mayor said. Overall, 86% of city workers have received at least one dose.
As of Wednesday, the FDNY was preparing for a 20% reduction in service beginning Monday, a source familiar with the ongoing situation told CNN. And as many as one-fifth of the city’s fire companies could be closed as a result of unvaccinated staff, the source told CNN, adding one-fifth of the department’s ambulances may go out of service for the same reason.
In an effort to mitigate the anticipated staffing problems, the department is planning to cancel vacations and enact mandatory overtime. The city’s medical services also will seek support by enacting mutual aid with private hospitals and volunteer ambulance services, per the source.
De Blasio on Thursday offered assurances that emergency services will continue to function despite expected staff shortages, though he said he expected a rapid increase in vaccinations as the deadline approached, similar to what took place last month when a vaccine mandate went into effect for teachers and health care workers.
The city has contingency plans in place to use administrative personnel and mandatory overtime to fill staffing gaps, de Blasio said.
The mayor reiterated his administration’s vaccine mandate was aimed at keeping New Yorkers safe, telling reporters, “Until we defeat Covid, people are not safe. If we don’t stop Covid, New Yorkers will die.”
Fire Commissioner Daniel A. Nigro said in a statement to CNN that the FDNY will continue to provide necessary services, but he lamented the “unfortunate fact that a portion of our workforce has refused to comply” with the mandate.
“We will use all means at our disposal, including mandatory overtime, mutual aid from other EMS providers, and significant changes to the schedules of our members,” the commissioner said. “We will ensure the continuity of operations and safety of all those we have sworn oaths to serve.”
Unions for the fire and police departments have come out against the mandate, with Uniformed Fire Officers Association President Jim McCarthy describing a requirement that firefighters make a decision about the vaccine by Friday as “unconscionable.”

CNN’s Brynn Gingras and Evan Simko-Bednarski contributed to this report. 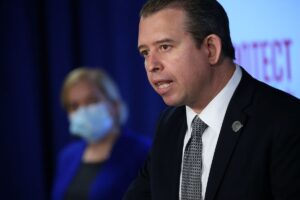