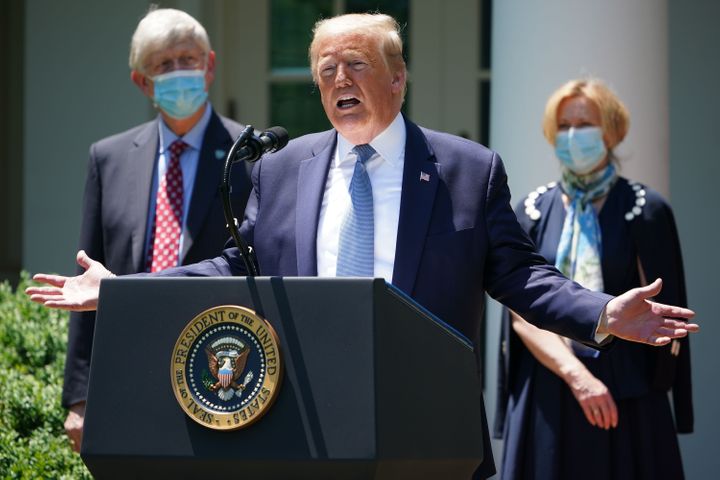 Tens of millions of doses of drugs that President Donald Trump touted as “game changers” in the fight against the coronavirus are now in limbo after the Food and Drug Administration stripped them of their emergency use authorization this week.

The drugs — hydroxychloroquine sulfate and chloroquine phosphate — were deemed too risky and likely ineffective to treat COVID-19.

The FDA’s decision Monday, which one Trump official denounced as a partisan attack, follows a mad dash by states and hospitals to purchase chloroquine and hydroxychloroquine after health care providers were given a green light to use the drug in March through the emergency use authorization. The drugs were otherwise not approved to treat COVID-19.

“What do we have to lose?” Trump asked in a March 21 news briefing that endorsed the drugs.

Based on continued review of scientific data, FDA has determined that chloroquine and hydroxychloroquine are unlikely to be effective in treating #COVID19 and therefore we are revoking the emergency use authorization for these drugs: https://t.co/k9kJMeci0a pic.twitter.com/W2aItvFcBU

Manufactures by mid-March announced that they had ramped up production of the drugs globally to meet anticipated demand. But now it’s unclear what will be done with the excess supply.

The federal stockpile has 66 million doses of the drugs, according to The New York Times. This includes 3 million tablets of Resochin, Bayer’s chloroquine phosphate drug,  which the company donated but is not approved for use in the U.S.

The U.S. Department of Health and Human Services “is working with the companies that donated the hydroxychloroquine sulfate and chloroquine phosphate to determine the available options for the products that remain,” Stephanie M. Bialek, chief of the Strategic National Stockpile’s Communication Services Section, told HuffPost Wednesday.

Similar responses were made to HuffPost by public health officials for states that either purchased the drugs or received donations.

MANDEL NGAN via Getty Images President Donald Trump, seen in May, called the anti-malaria drugs chloroquine and hydroxychloroquine “game changers” in the fight against the coronavirus.

“We are in the process of contacting the manufacturer to see if we can send the hydroxychloroquine back for other uses,” Mindy Faciane, a public information officer with the Louisiana Department of Health, told HuffPost.

“We are evaluating plans for the remaining doses,” said Erin Silk, a spokesperson with the New York State Department of Health.

North Carolina’s Department of Health “is making an assessment about what to do with the supplies we have on hand,” said its communications manager, Kelly Haight Connor.

Other states spent hundreds of thousands of dollars on the drugs, the AP reported. 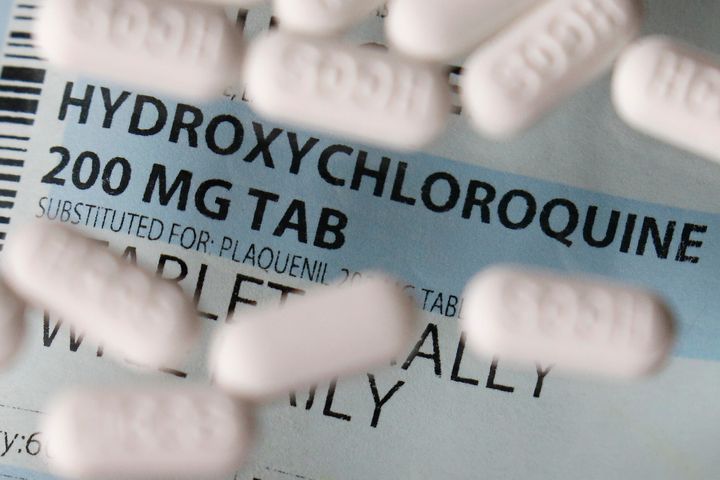 ASSOCIATED PRESS The FDA in March issued an emergency use authorization for the anti-malaria drugs chloroquine and hydroxychloroquine for the treatment of COVID-19. On Monday, it revoked that authorization.

Utah was able to cancel its order before it arrived, a representative for Utah’s Department of Health told HuffPost.

In Ohio, “We are working on a plan now,” a health department representative told HuffPost.

Oklahoma reportedly spent $2 million on the drugs. A representative for that state’s health department did not respond to HuffPost’s request for comment.

During the first 17 days of March, orders by hospitals for chloroquine spiked by 3,000 percent across the country, while orders of hydroxychloroquine increased by 260 percent, according to the health care company Premier, which tracked purchasing data from 4,000 U.S. hospitals and health systems.

Amneal Pharmaceuticals on March 20 announced that it expected to produce about 20 million tablets of hydroxychloroquine sulfate by mid-April. 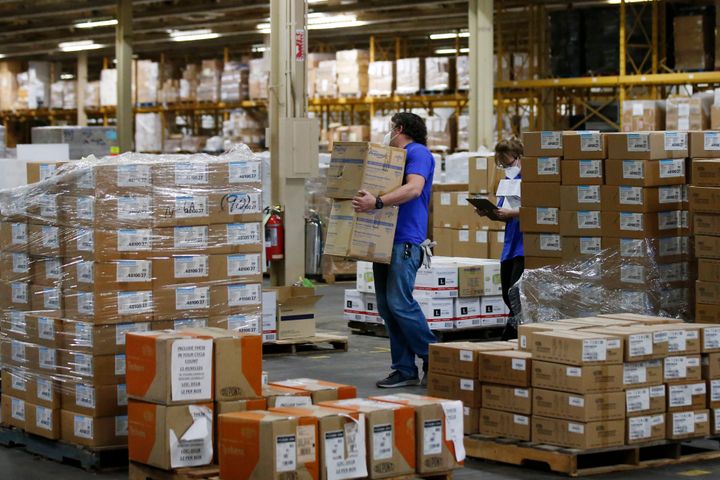 ASSOCIATED PRESS Workers carry boxes at Oklahoma’s Strategic National Stockpile warehouse in Oklahoma City in April. States spent billions of dollars stocking up on medical supplies such as masks and breathing machines during the coronavirus pandemic.

Major wholesale distributors put restrictions on orders of the drugs to prevent hoarding, but this was done only after a spike in demand, suggesting that many health care providers had already stocked up on large quantities of the drugs, according to Premier.

Representatives for Bayer and Amneal did not respond to HuffPost’s requests for comment.

Chloroquine phosphate and hydroxychloroquine sulfate remain FDA-approved to treat or prevent malaria, which is a mosquito-borne disease that affects around 2,000 people in the U.S. each year, typically following overseas travel or immigration, according to the Centers for Disease Control and Prevention.

Hydroxychloroquine is also FDA-approved to treat autoimmune conditions such as rheumatoid arthritis, which affects an estimated 54.4 million people in the U.S. 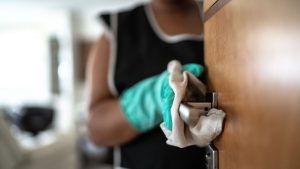