If you announce “play ball” but there’s no one in the park to hear it, does the game really start?

It’s not an age-old question, but we received an answer nevertheless Tuesday night in San Francisco, as the Giants opened their 2020 home schedule in front of an attendance of zero at Oracle Park.

Here are my running thoughts and observations of what is (hopefully) a once-in-a-lifetime home opener by the Bay.

I’ll be updating this article every half-inning. Hit that refresh button every now and again for more good stuff. (Or whatever this is).

Bottom of the sixth: 5-3 Padres

• “I just looked down the right-field side to see if anyone is warming up for the Padres.” – Kuiper

Yep, it’s going to be a while before we all commit to muscle memory that the bullpens at Oracle Park are in center field now.

• A nice leadoff double for Mauricio Dubon — a blooper down the left-field line. Dubon might not be a franchise cornerstone, but his acquisition last year was one of the clearest signs yet that the Giants’ rebuild is on the right path. He’s going to have a nice career as a utility guy, he can play seven positions and hit at an above-average rate, and they landed him, straight-up, for a starter-turned-reliever on a one-year contract who had put together only a handful of nice innings.

• Yaz followed Dubon with an even bloopier double down the left-field line. He even tossed his bat in frustration before realizing that it might fall in the only foot-by-foot square in left field that wasn’t going to have a Padre on it. That — well, ok, the short ramp-up to the season — chased Davies, who was spectacular.

• The Giants land two runs after loading the bases with no outs. Tyler Heineman’s two-out, two-strike base hit pulling the Giants within two. Nice piece of hitting from the Giants catcher. Let’s see Joey Bart do that!

No, seriously, let’s see Joey Bart do that.

• What will be remembered from this inning, though, is Hunter Pence pinch-hitting with one out and two on, and then popping out to the catcher on a pitch that should have been deposited into the stands. He’s having a rough start to his return.

• That said, I don’t care how juiced the ball is, it’s hard to hit one out when you can see the moisture in the air on television.

“I think the intern took over.” – Kuiper

• The Giants’ new regime doesn’t seem too high on Brandon Crawford, but the dude can still pick it with the best of them at shortstop. His range is dipping, perhaps precipitously, but you can’t teach a reaction like the one he had on Tommy Pham’s hard-hit ball to the shortstop’s left. He made it look easy. It was not.

Bottom of the fifth: 5-1 Padres

• Davies’ changeup is on another level right now. The Giants can’t handle the 10 to 12 mile-per-hour difference between that pitch and his

• Lefty Conner Menez is in the game for the Giants. He was able to get out Tatis Jr. All in all, a nice 1-2-3 inning.

Bottom of the fourth: 5-1 Padres

• “Samardzija is going to look at the replay of this game and he’s not going to be happy when he sees the corner strikes that Davies is getting that he hasn’t gotten” – Krukow, minutes after this was called a strike for the Giants’ pitcher.

Sometimes you’re reminded that these announcers are paid by the team.

• “That’s the same smile you get when a guy’s writing you a ticket” – Krukow. Sometimes you’re reminded why they’re paid so well.

• Hey, if this is a strike, throw it there every single pitch. (Yes, it was called a strike… and no, he did not keep throwing it there.)

• The Giants should probably find a way to sign Wil Myers. Dude rakes at Oracle Park — one of the only people on the planet who likes hitting in San Francisco.

Yeah, he got all of that one.

And the sound — that loud crack that I head over here on the other side of the bay — of his massive homer, his 10th in San Francisco, to centerfield is enough to make you fall in love with the game again. (Or, if you’re a hard-core Giants fan, whatever the opposite of that is.)

• Do you think the Giants made Kuiper pay for this cutout?

Bottom of the third: 3-1 Padres

• Soft thrower Zach Davies is showing Samardzija how to get guys out without lights-out stuff. The righty can’t touch 90 miles per hour with his fastball, but he’s keeping the Giants off-balance. Sandoval was late — late! — on a high fastball that clocked in at 87 mph.

• It is truly astounding how much more respectable the Padres are as an organization now that they’ve made the long-overdue move back to brown jerseys. Such an outstanding look.

• Oh, and Samardzija put two on with nobody out and gave up a three-run homer to Fernando Tatis Jr. to right field.

Kid’s a superstar — and a player who is likely to be a thorn in the Giants’ side for a decade.

• There was a moment where it looked like Samardzija could get out of the jam. Third baseman’s Wilmer Flores’ “pop-up dance” picked up first out in foul territory.

“How long did it take you to adjust to the winds in Northern California?” – Krukow

“About the third year of broadcasting” – Kuiper

• Flores did the dance again on an infield pop-up that was caught by first baseman Pablo Sandoval — but not without a little pass interference from the Giants’ third baseman. When’s Longoria return?

Bottom of the second: 1-0 Giants

• How great is this photo of Krukow with his new granddaughter?

And how great was Kuiper’s quip that his reaction to meeting Krukow was the exact same as Krukow’s here?

Good stuff all around.

• “If you ever corked your bat, you’re in trouble,” Krukow says after Jurikson Profar has the end of one of his sticks (well, apparently Starling Marte’s stick) spit off. I won’t lie “is there cork in there?” was the first thing I thought, too. Get that bat to the lab. (Or maybe MLB commissioner Rob Manfred is in on all of it.)

Bottom of the first: 1-0 Giants

• Here’s Krulow pushing the right field conspiracy theory again. I’ve had enough conversations with the grounds crew at Oracle Park to know the issue isn’t the wind coming from the holes in the right-field fence, but rather the wind that wraps around the stands along the first-base line. Why’s the ball flying at the notorious pitchers’ park this year? The ball is more tightly wound than me in court.

• An error on Padres third baseman Manny Machado leads to a run? Things are strange indeed — Machado is one of the finest fielding players in the game.

Of course, the official scorer, who is sitting at home like me, blamed the left fielder, Tommy Pham, for Mike Yastrzemski being able to score. We all know what really happened…

• “It’s so odd to have a Giants home opener and not have Buster Posey in the catcher position.” – Krukow

There’s no doubt about that, but Giants fans should familiarize themselves with this feeling. Posey is expected to return to the lineup after this season, but there will be more longtime Giants for whom this might be the final Oracle Park home opener. We’re seeing how Brandon Crawford is viewed by Gabe Kapler’s coaching staff — he’s a platoon option. I imagine Brandon Belt, when he returns, will see the same treatment.

• “We do rely a lot on the scoreboard when it comes to the lineup, balls and strikes, even velocity — we’re not going to get any help tonight. They say they want to give the batters an advantage with the ‘batters’ eye’ — take a look at that batters eye!” — Kuiper

“There’s no distraction out there.” — Krukow

• They raised the wall in centerfield since last week. The argument is that it’s a “more consistent batters eye for the hitters”, per Giants announcer Duane Kuiper. That’s a nice company line. I’d bet it might have something to do with the fact that the balls this year have looked exceptionally juiced. The Giants are trying to increase offense in Oracle Park, but not by *that* much.

• The Giants did a nice job of having public address announcer Renel Brooks-Moon address the camera ahead of the game, introducing a “first pitch” from San Francisco Mayor London Breed and four front-line workers. The only issue? The center field wall no longer looked tall for Brooks’ pitch. And the sun seemed to be out for her throw. I’d guess she recorded it last week. Did she throw the first pitch before the Giants threw theirs last Thursday?

• “He will throw anything at any time,” says Giants game analyst Mike Krukow of Samardzija.

Indeed, he has a lot of pitches, but can he throw them for strikes? And if he can hit the zone, can he get them past opposing hitters? Variety is nice, but as we’re seeing across the sport, having one great swing-and-miss pitch is better than four, five, or six pitches that hitters can square up. 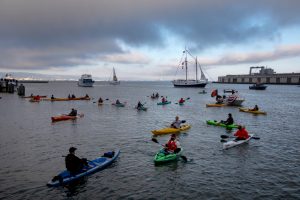