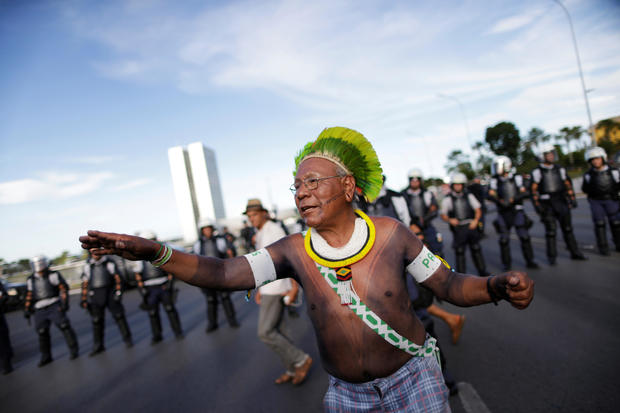 One of the most iconic defenders of the Amazon rainforest, indigenous chief Paulinho Paiakan, died after contracting the new coronavirus, activists said Wednesday. His death comes as Brazil is on pace to pass the United States in COVID-19 deaths this summer.

Paiakan, who rose to fame leading the fight against the Belo Monte hydroelectric project in the 1980s, died Tuesday at a hospital in the city of Redencao, in northern Brazil, said Gert-Peter Bruch, founder of environmental group Planet Amazon.

“He worked all his life to build worldwide alliances around indigenous peoples to save the Amazon,” Bruch told AFP. “He was far ahead of his time. We’ve lost an extremely valuable guide.”

The Brazilian Indigenous Peoples’ Association (APIB) called Paiakan a “father, leader and warrior” for indigenous peoples and the environment.

Paiakan, who was around 65, was a chief of the Kayapo people.

He gained international recognition leading the fight against the environmental destruction set to be caused by Belo Monte, a sprawling complex of dams in the Brazilian Amazon.

He forged alliances with other indigenous groups, international activists and celebrity backers, and was a lead organizer of the Altamira gathering, a 1989 conference that rallied opposition to the project.

The movement helped convince the World Bank to withdraw funding for Belo Monte, though the project ultimately went ahead in 2011.

Paiakan’s image was stained in 1992 when a white student accused him of raping her.

He was acquitted in 1994, but convicted four years later in a second trial, ultimately serving part of a six-year sentence under house arrest on an indigenous reservation.

His allies insist the case was fabricated to undercut his growing political power, at a time when the landmark United Nations Earth Summit was being held in Rio de Janeiro and Paiakan was being touted as a possible Nobel Peace laureate.

However, Paiakan had resumed his activism in recent years, notably warning against Brazilian President Jair Bolsonaro’s calls to open protected Amazon lands to agriculture and mining.

Known for his bright feather headdresses and deftness in building cross-cultural alliances, Paiakan was diagnosed with coronavirus on June 8 after a trip to his home village, A-ukre, Bruch said.

As the pandemic has surged in Brazil, COVID-19 has hit particularly hard among Amazon indigenous groups.

Nearly 5,500 indigenous people in Brazil have been infected, with 287 deaths, according to APIB.

On Tuesday, Brazil experienced a record increase of nearly 35,000 daily coronavirus cases.  But Gimena Sánchez-Garzoli, the Washington Office on Latin America (WOLA)’s director of the Andes, told CBS News on Wednesday that she wouldn’t “trust” numbers released by the Brazilian government.

She believes they’re much higher than what has been reported, citing Brazilian President Jair Bolsonaro’s lack of transparency on the data.

“There are questions about really how much testing is going on in most of the areas worst affected, which may also influence the numbers,” she said. “The fact that it’s spreading like wildfire is completely not a surprise.”

Christopher Brito contributed to this report. 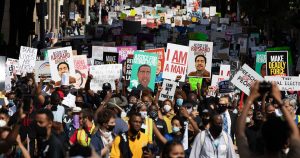