One of Huntington’s legendary teachers will be honored next week with a plaque and a memorial after a teacher and a former school board member lobbied for the recognition.

A bronze plaque and a framed bio of the former district educator Jack Abrams will be unveiled and eventually hung on the wall in the main hallway of The Jack Abrams STEM Magnet School on Lowndes Avenue.

The honor comes after a teacher and a former school board member started researching the idea last year.

“Teachers are retiring, students are graduating and there are a lot of staff in the district who don’t know about the man that the building is named after,” said Keith Meyers, a sixth-grade math teacher at The Woodhull Intermediate School. “So, it was important to me to have not only the plaque but also a bio so that people will always know something about him more than his titles.”

The unveiling will take place Saturday and will also serve as a memorial to Abrams who died June 24, 2020, in Las Vegas at age 89.

Meyers, along with Joe Leavy and Allison Von Vange, also teachers in the district, and Linda Guido, a former school board member, were instrumental in getting one of the district schools named for Abrams in 2008.

Abrams served many roles in his more than 50 years in the district, including as sixth-grade teacher, elementary science coordinator and principal of several district schools. He also initiated an outdoor education program for sixth-graders.

He retired from full-time work in the district in 1987. He then established Huntington’s School Heritage Museum working part time as curator for 25 years, leaving that post in 2012. The school that bears his name was designated a STEM school in 2013.

Meyers reached out to Guido last year to get the ball rolling for a memorial to Abrams, but because of the COVID-19 pandemic it wasn’t until this year they were able to present their idea to the superintendent and school board. The board approved the plan in August.

Guido said Abrams was her oldest daughter’s sixth-grade principal and that her three other children knew him when he gave tours of the Heritage Museum. She said his memory was so keen and that he never forgot anything.

“Just the mention of Jack Abrams’ name brings a smile to my face,” said Guido who is an aide to Legis. William Spencer. Everyone who had the privilege of knowing him over the years has a ‘Jack’ story to tell.”

A former student who remembered Abrams said he is very deserving of this latest honor.

JoAnn Nigro-Guido, of Greenlawn, was a student of Abrams at the Woodbury Avenue Grammar School in 1957. “Mr. Abrams made learning fun,” Nigro-Guido said. “I didn’t mind going to school because he never made it feel like learning. He always made it fun.”

Huntington Superintendent of Schools James Polansky said in an email that Abrams’ legacy will remain a Huntington stronghold.

“I had the privilege of getting to know Jack and to learn firsthand of his passion for educating children and for all things Huntington,” the email said. “He was incredibly proud of the students and staff with whom he worked, as well as the school that holds his namesake.”

There will be a memorial and the unveiling of a plaque recognizing Abrams’ achievements.

The ceremony will be at the Jack Abrams STEM Magnet Intermediate School, 155 Lowndes Ave. in Huntington Station.

Deborah Morris is a native Long Islander and covers the town of Huntington. 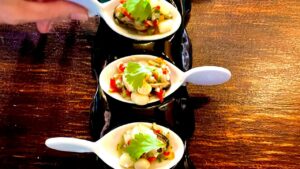