FDA chief on Trump's inaccurate coronavirus claim: 'Won't get into who's right and wrong'

Speaking with CNN’s “State of the Union,” Hahn, a member of the White House coronavirus task force, said he was “not going to get into who’s right and who is wrong” when pressed repeatedly about Trump’s Saturday comments. But he called the virus and recent surge in cases “a serious problem that we have.”

“We must do something to stem the tide,” he said, “and we have this in our power to do it by following the guidance from the White House task force and the CDC.”

“People need to take it seriously,” he added.

Hahn was pressed on Trump’s remarks during an interview with ABC’s “This Week,” as well. He said the White House task force is “certainly concerned” with the rapid rise in cases across the Sun Belt. He added the situation is “a little bit different” than what the country saw in March and April because confirmed cases are increasing among younger Americans and the U.S. has new tools to handle outbreaks.

“Well, what I’d say is, you know, any case, we don’t want to have in this country,” he said. “This is a very rapidly moving epidemic, rapidly moving pandemic, and any death, any case is tragic. And we want to do everything we can to prevent that.”

During an Independence Day speech on Saturday, Trump said increased testing has shown that nearly all cases were harmless.

But Trump’s claims belie the fact that the death and hospitalization rates for the coronavirus total far more than 1 percent of cases. According to an NBC News tally, there have been more than130,000 COVID-19 deaths in the U.S. out of more than 2.8 million confirmed cases — around 4 percent— compounded with hundreds of thousands of hospitalizations.

Trump’s former homeland security adviser, Thomas Bossert, tweeted Sunday that “we are in trouble,” adding that masks alone are “not enough” to stem the spread of infection.

What are the hundreds of thousands of infectious people in these states doing right now? Isolating? Are their family members quarantining themselves? How many days does it take for them to notify people with whom they have been in close contact? Are they even notifying others?

With the virus surging across much of the South and West, multiple mayors on Sunday said their cities are facing dire consequences of unclear guidance from the Trump administration.

In an interview with “State of the Union,” Austin Mayor Steve Adler, a Democrat, said Trump’s claim “makes me angry.”

“You know, I understand he has a tough job, but it is dangerous not to be sending a clear message to Americans, to folks in my town,” the Texas mayor said. “We have the July 4 weekend, and we need everybody wearing masks. And when they start hearing that kind of ambiguous message coming out of Washington, there are more and more people that won’t wear masks, that won’t social distance, that won’t do what it takes to keep a community safe. And that’s wrong, and it’s dangerous.”

“I just have to hope that people aren’t going to listen to that, and they will stay focused on what they’re hearing here more locally,” he added.

On infections in his city, Adler said, “If we don’t change the trajectory, then I am within two weeks of having our hospitals overrun. And in our ICUs, I could be 10 days away from that.”

On “This Week,” Miami Mayor Francis Suarez, a Republican, said, “It’s clear that the growth is exponential at this point.”

The White House has in recent days begun to shift some of its coronavirus messaging, including on the importance of mask-wearing.

Recently and repeatedly, the president has wrongly claimed that a surge in cases is the result of increased testing, even though other numbers like positivity rates tick upward, too.

During a Tulsa, Oklahoma, rally last month, Trump said he told his administration to “slow down” coronavirus testing. Days later, he said it wasn’t a joke. Days after that, he said he was being sarcastic.

Allan Smith is a political reporter for NBC News. 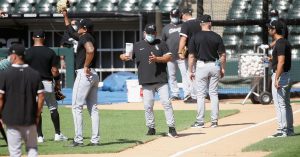 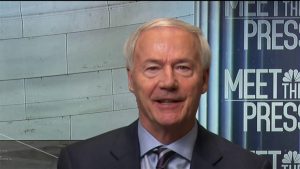