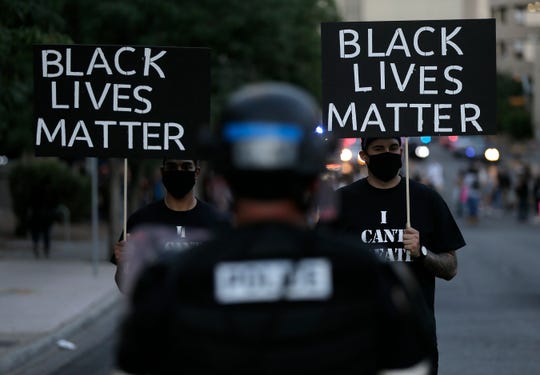 Cities across the country followed Washington D.C.’s lead by painting “Black Lives Matter” and other words of support on city streets. USA TODAY

FBI agents arrested Manuel Flores, a 42-year-old truck driver from El Paso, on Monday in the Dallas area on a federal charge of making a threat over the internet, the FBI and U.S. Attorney’s Office said Wednesday night.

Flores allegedly recorded and uploaded a video to YouTube in which he made threats to Black Lives Matter protesters, the U.S. Attorney’s Office for the Western District of Texas said citing a federal criminal complaint.

The complaint stated that an investigation began Saturday following an online tip to the  FBI National Threat Operations Center regarding an alleged threat to shoot protesters in the Dallas area.

‘The mask is off’: Will the Black Lives Matter movement finally put an end to Confederate flags and statues?

In the video, what appears to be an AR-15 rifle can be seen at the feet of the man, who is seen below the knees but whom the FBI identified as Flores, authorities said in a news release.

In the video, Flores allegedly said he may have “500 rounds of something” and dared Black Lives Matter activists to “stop him,” officials said.

A second day of protesting over the death of George Floyd while in the custody of the Minneapolis Police Department. El Pasoans once again took to the streets, this time downtown. El Paso Police, CBP Field Operations Police and State Troopers were on scene in full riot gear. The protest was mostly peaceful. (Photo: Mark Lambie / El Paso Times)

“My dream is at least take out at least 200 (racial slur), (expletive) savages out,” Flores said in the video, according to a criminal complaint.

After receiving the online tip, an FBI investigation tracked down the posting to Flores’ phone. He was visited at his home in El Paso by FBI agents at about at 3 a.m. Sunday, according to the complaint.

Flores admitted the “Don’t CA My TX” account was his, the complaint stated..

He told agents he had returned to El Paso from making a delivery in Arizona early Saturday and that he had drank eight or nine IPA-style beers and didn’t remember what he had said on the video, according to the complaint.

“Flores stated that he loves America and is upset about what is going on right now. However, Flores has no intention of harming anyone but would defend himself if he had to. Flores was remorseful and apologetic to interviewing FBI Special Agents,” the complaint stated.

Flores allowed agents to search his home, where they found an AR-15 style rifle and ammunition in his bedroom, documents stated.

On Monday, FBI agents spoke to Flores by phone and located and arrested him in the Dallas area without incident. He made his initial court appearance before a U.S magistrate judge in Dallas on Tuesday.

“Our office will treat any threats of violence against protesters extremely seriously,” U.S. Attorney John F. Bash said in a tweet regarding the case.

Flores remains in the custody of the U.S. Marshals Service awaiting transfer to El Paso.

If convicted on the federal threat charge, he faces up to five years in federal prison.

Daniel Borunda may be reached at 915-546-6102; dborunda@elpasotimes.com; @BorundaDaniel on Twitter. 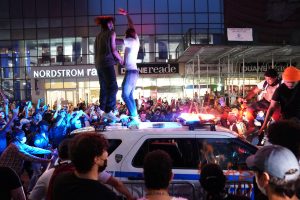 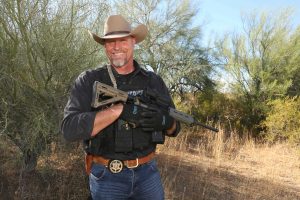 Arizona sheriff tested positive for coronavirus before meeting with Trump