An Anaheim police officer was treated early Monday for a potential exposure to fentanyl, authorities said.

The officer was driving a suspect, who police said had drugs on him, to the station when he started feeling lightheaded and his feet and legs began to feel numb — symptoms consistent with fentanyl exposure, according to Sgt. Shane Carringer, a spokesperson for the Anaheim Police Department.

The officer, who was not identified, pulled over and called for help. He was treated at the scene by Anaheim Fire & Rescue and did not receive naloxone, a drug used to reverse opioid overdoses, Carringer said.

The incident comes days after the San Diego County Sheriff’s Department released a graphic video showing a deputy who authorities said overdosed from an exposure to fentanyl — a video that since has gone viral and sparked a backlash among some who think it stokes overblown fears.

Carringer said he couldn’t recall another time when an Anaheim officer was treated after coming into contact with fentanyl, but he said members of the police force are well aware of the dangers posed by the drug, a synthetic opioid said to be 50 times more potent than heroin.

For the last two or three years, videos depicting officers experiencing negative effects from the powerful drug are commonplace on social media and elsewhere online, he said.

“Those videos are things that … we’ve been seeing for years now,” Carringer said. “It’s just another hazard of the job that our officers have to live with.”

The Anaheim officer was likely exposed to the drug during an arrest early Monday, authorities said. A no-bail warrant was issued for the suspect, who was not identified, and the officer stopped the person in a car near East Street and the 91 Freeway around 2 a.m. Carringer said the suspect was found with drugs he intended to sell.

It’s believed that the Anaheim officer inhaled micronized particles of fentanyl during the arrest and that while driving the suspect to the police station to be booked, he began experiencing symptoms that prompted a call for assistance.

Emergency responders treated the officer after he pulled over. He declined further medical attention and was sent home for the night. The suspect was later booked without incident, police said.

The scene was treated as a hazmat incident, Carringer said, and overnight video taken by OnScene.TV showed personnel cordoning off an area with yellow police tape.

A presumptive drug test, also known as a field test, yielded a positive result for fentanyl, Carringer said, noting that it’s “a pretty good indicator.” Still, the substance that was recovered would need to go through laboratory testing for a more conclusive result, he said.

It was not immediately clear whether the officer was wearing protective equipment, such as gloves or an N95 mask, which are provided to use when handling illicit drugs, Carringer said. Officers don’t always know when they’re about to come into contact with harmful substances, he said.

“Just [as] with any sort of drug, oftentimes users or dealers conceal them or hide them,” he said. “So if an officer is making an arrest of somebody and they come across hazardous material — in this case fentanyl — they may stumble across it not knowing that they’re going to expose themselves to it.”

Much is still unknown about the circumstances surrounding the San Diego County deputy who reportedly overdosed in early July seconds after testing a white powder he suspected was cocaine or fentanyl.

“I remember not feeling right, and then I fell back,” Faiivae said in the video. “I don’t remember anything after that.” He said he struggled to breathe through lungs that felt “locked up.”

The video ends with Sheriff Bill Gore warning that “being exposed to just a few small grains of fentanyl could have deadly consequences.”

Sheriff’s officials have not released medical records detailing Faiivae’s condition, and they have not said whether he was exposed to fentanyl by touching or inhaling the drug, or even whether fentanyl was found in his system.

The department did not respond to a request for comment Monday.

Though it’s widely acknowledged the drug has played a large role in fueling a deadly opioid epidemic, there’s significant debate about how much of a threat it poses to first responders who come into contact with it.

Some experts are highly skeptical that simply touching the drug can cause an overdose, even as the Centers for Disease Control and Prevention urges that first responders use caution when handling it.

As for briefly inhaling fentanyl in the air, “You have to really go for it,” said Dr. Jeremy Samuel Faust, an emergency physician at Brigham and Women’s Hospital in Boston and an instructor at Harvard Medical School.

Though the overdose risk for fentanyl users is very real, “the risk of clinically significant exposure to emergency responders is extremely low,” according to a statement by the American Academy of Clinical Toxicology and the American College of Medical Toxicology.

Some in the medical community worry that creating panic around passive exposure can cause unnecessary stress among first responders and potentially deter them from helping someone who has overdosed.

“There is more of a PTSD-like fear of this drug when, in reality, it’s not warranted. There is no risk of poisoning from such an exposure. And I fear people won’t rescue those who have overdosed because of the fear of being exposed,” said Dr. Lewis Nelson, chairman of the Department of Emergency Medicine at Rutgers New Jersey Medical School. 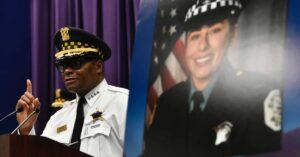 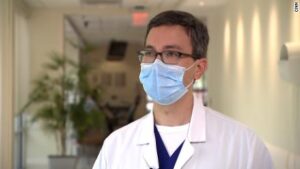