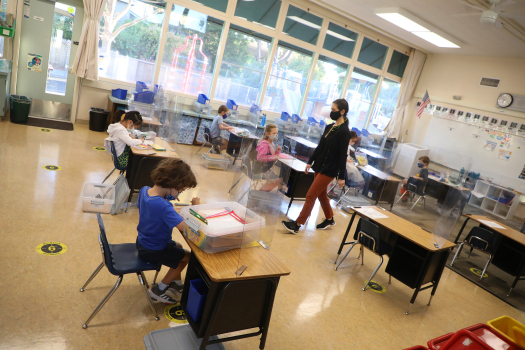 Gov. Gavin Newsom read to kids in a Palo Alto elementary classroom Tuesday where he pitched the plan he hatched a day earlier with legislative leaders to speed reopening of other public schools throughout the state whose students could remain stuck in online-only distance learning for months.

Barron Park Elementary where Newsom visited in the Palo Alto Unified School District was among the first public schools in the Bay Area to reopen to a hybrid blend of remote and in-person instruction last fall, and the governor hailed it a model for others to follow. The district will open grades 7-12 to hybrid learning next week.

“It proves we can do that in other parts of the state,” Newsom said.

The legislative package announced Monday offering $2 billion for schools that reopen by the end of March to help cover costs such as for personal protective equipment, ventilation upgrades and COVID-19 testing went to its first hearing Tuesday. Newsom said he expected to sign it by week’s end.

The California Teachers Association, which has resisted returning teachers to classrooms out of safety concerns, called it a step in the right direction. But the proposal disappointed parents and local officials who had hoped the state would go farther in pushing reluctant districts to reopen faster.

“The deal between the governor and the legislature has shined a light on the keyhole for local school districts, but it remains for the districts to open their schoolhouse doors to thousands of our underserved, struggling students,” San Jose Mayor Sam Liccardo said Tuesday. “Nearly every other state and nation has figured out how to open elementary schools safely — why can’t California? It’s not about safety or the science — it’s about the politics.”

The legislative agreement, a revision of an earlier proposal announced Feb. 18 as Assembly and Senate bills 86, provides a total of $6.6 billion for the state’s public schools to cover costs of reopening and of getting students caught up academically. The additional $4.6 billion would fund expanded learning opportunities, such as summer school, tutoring and mental health services.

It calls for elementary schools that could reopen under the state’s color-coded metric for restrictions based on infection rates to offer in-person instruction by the end of March for students in kindergarten through second grade to receive their full share of the $2 billion reopening funding.

In counties where infection rates would allow all grades to reopen, schools would have to offer in-person instruction to all elementary students from kindergarten through sixth grade, and to at least one middle or high school grade, by the end of March to receive the money.

Regardless of infection rates, schools also would have to provide in-person learning in small groups to the most vulnerable students in all grades, such as the homeless or English learners, by the end of March. And online learning would remain an option only for students who request it.

Schools that fail to reopen under those terms by March 31 would lose 1% of their allotment from the $2 billion in reopening money for every day they delay through May 15, after which they would forfeit the funding.

It was unclear however whether the deal would spur schools that have been moving more slowly to reopen sooner. San Jose Unified, for example — Santa Clara County’s largest, with 30,000 students — said it wouldn’t alter plans to resume in-person learning April 21, which conforms to its agreement with teachers that they would be fully vaccinated first or infection levels would fall below the state’s second-highest red tier level. Santa Clara County entered the red tier level Tuesday, in which limited indoor dining also is allowed.

Palo Alto is among a handful of public school districts in Santa Clara County that reopened to hybrid instruction — others include Los Altos, Los Gatos and Saratoga, all in affluent suburbs where virus rates have been much lower than in San Jose. All had reopened long before the latest state incentive plan.

Palo Alto Unified Superintendent Don Austin said Tuesday that Newsom’s insistence that schools aim to reopen, the extra funding he has provided to help them do that, and his prioritization of teachers for vaccines — guaranteeing them 10% of the state’s supply of the scarce shots, have been helpful in getting schools open.

Asked whether the legislative deal will reopen other schools more quickly, Newsom said “I’d like to think that with $2 billion in incentive grants, prioritizing vaccines for teachers, we’ll have a more aggressive narrative.” 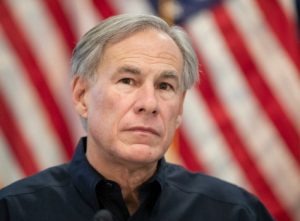 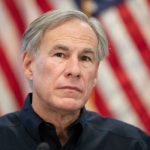 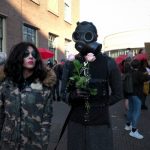