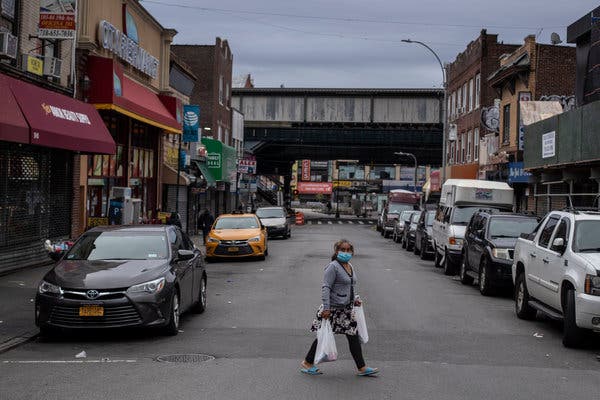 Weather: Warm, dry and bright, with a high in the mid-60s.

Alternate-side parking: Suspended through May 12. Meters are in effect.

New York officials canceled the state’s Democratic presidential primary, calling the vote, which had been set for June 23, “essentially a beauty contest” that the state could not afford in the face of the coronavirus pandemic.

The decision Monday by the Democratic commissioners of the state Board of Elections made New York the first state to cancel its presidential primary. It followed a decision by Senator Bernie Sanders of Vermont to end his presidential campaign, effectively conceding the Democratic nomination to former Vice President Joseph R. Biden Jr.

The move Monday angered supporters of Mr. Sanders. They had mounted an email and phone campaign to pressure the Democratic election commissioners to hold the primary so their candidate could amass more delegates to the Democratic National Convention and wield greater influence over the party platform.

[Get the latest news and updates on the coronavirus in the New York region.]

Gov. Andrew M. Cuomo of New York said on Monday that 337 more people had died of the virus in New York State, and Gov. Philip D. Murphy of New Jersey reported an additional 106 deaths there.

The one-day tolls were less than half of what the two states were reporting at their peaks.

With both states showing progress in fighting the virus, Mr. Cuomo and Mr. Murphy have begun to offer details on reopening from the lockdowns in the months ahead.

[Coronavirus in New York: A map and the case count.]

With over a million New Yorkers out of work because of the virus and the related shutdown, food banks across the state are experiencing huge jumps in demand — as much as 40 percent upstate, 100 percent in New York City and 200 percent in Westchester County, Mr. Cuomo said.

He said the state would provide food banks with $25 million in emergency aid.

He also noted that some dairy cooperatives upstate were dumping milk because the market could not consume it.

They’re Still Working at the Airports, and They’re Scared

‘It Was Just Too Much’: How Remote Learning Is Breaking Parents

“You don’t need to nonessentially travel to Brooklyn,” a man said to Mayor de Blasio and the first lady, Chirlane McCray, after spotting them in Prospect Park recently. [New York Post]

A Democratic Assembly candidate in the Bronx stands by her antivaccine comments. [Daily News]

And finally: ‘A pet-friendly little island’

Are people who live in pet-friendly buildings happier? Are their apartments more valuable?

Anecdotal evidence strongly suggests that the answer to both is yes.

Dogs aren’t big on social distancing. They lick, sniff and slobber on one another — and on people — in elevators, lobbies and common areas in pet-friendly buildings. Conversation, friendships and romance between owners often form as a result.

“Pets are playful, so buildings with pets have more colors and are brighter and more fun to live in. Pets add vibrancy,” said Dr. Zaynab Satchu, a veterinarian in New York. “Dogs bridge the gap between busy people who wouldn’t otherwise meet.”

So maybe it shouldn’t have been a surprise when a well-established New York building changed its policies after decades of refusing to allow pets. Stewart House, a white-brick residential co-op in Greenwich Village with more than 350 apartments, took the plunge two years ago.

The changes — to approve at least certain kinds of dogs and other pets — resulted in no more than a few dozen new canine neighbors. They were “Labs, doodles, very small dogs, the kind you see in most apartment buildings,” said Summer Zimberg, a Stewart House board member and a broker at Brown Harris Stevens. “The vibe in the building has changed,” she said. “It’s a friendlier place.”

Dog owners say they hear occasional grumbling and, especially when it is wet outside, get dirty looks in the elevators.

The coronavirus has given rise to an enormous demand for companion animals, so much so that it may now be easier to find a vacant apartment than a dog to foster.

“For many people, pets are members of the family, sometimes the only friend or family a person has,” said Karen Copeland, a New York lawyer who specializes in animal issues. She said New York housing and civil rights laws were increasingly protective of pet owners’ rights; as a result, she said, “Manhattan has pretty much gotten to be a pet-friendly little island.”

I had a job on 42nd Street near Lexington Avenue. On my way to work each day I would stop at a deli in the Chanin Building.

Every day, I would order the same thing — a bialy with cream cheese and a large coffee — from a counterman who never said a word.

One day, as I waited to place my order, I began to think about how boring I had become, getting the same thing every day. I scanned the menu on the wall behind the counter with the thought of trying something different.

I had not made a decision when it was my turn to order, and I stuttered a bit as I began to address the counterman.

“Come on, man, come on,” he said loudly, speaking to me for the first time in more than two years. “There are people waiting behind you.”

His tone annoyed me.

“Hey, man, I am trying to get through the day just like you,” I replied. “Give me a bialy with cream cheese and a large coffee.”

When I returned the next day and it was my turn to order, the counterman was quick to greet me.

From that day on, a bialy with cream cheese and large coffee were always ready for me when it was my turn at the counter.

We’re experimenting with the format of New York Today. What would you like to see more (or less) of? Post a comment or email us: nytoday@nytimes.com. 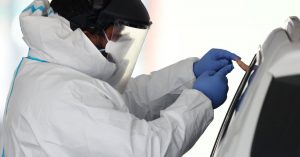 Should People Without Coronavirus Antibodies Be Second-Class Citizens?