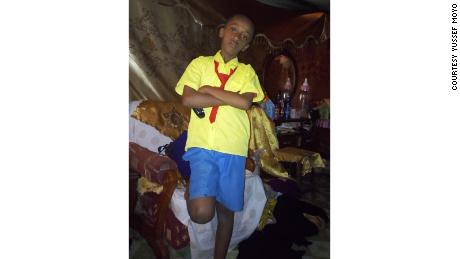 His father, Hussein Moyo Molte, was at a nearby friend’s place watching the news and recounts hearing gunshots moments before his daughter called to tell him, “Yassin’s been shot, we were on the balcony, the police had a torch on us and then they fired shots.”
Moyo rushed home to find the neighborhood engulfed in tear gas.
Neighbors drove Yassin to a Nairobi hospital where he later died from his injuries, according to his father who believes his neighborhood policemen are to blame for the incident, which happened on March 30.
“My child was shot on the balcony at home, he wasn’t even on the street,” said Moyo, “I support the curfew but how the policeman handled it was very wrong.”

‘Excessive use of force’

Kenya’s dusk-to-dawn curfew went into effect nationwide on March 27th in an effort to curb the spread of coronavirus, which has so far killed 14 people in the country.
However, human rights group Amnesty International told CNN it has documented 16 people killed by police officers since the curfew started.
“Excessive use of force further terrorizes a public that is already anxious and fearful,” said Amnesty International’s Kenya Director, Irungu Houghton.
Disturbing videos on local media showed police violently tear gassing, beating, and forcing people to lay in tight groups on the ground in the coastal city of Mombasa on the first day of curfew.
Houghton believes violent enforcement of the curfew damages public trust in the police and could hurt efforts to curb the spread of Covid-19.
“People will not voluntarily submit themselves to be tested if they feel their dignity and safety cannot be guaranteed.”
Kenya’s Inspector General of police vowed to investigate Yassin’s death and in a televised address, President Uhuru Kenyatta issued a public apology for the excessive use of force by police.
Charles Owino, the spokesman for the national police told CNN that Yassin was hit by a stray bullet, but the investigation and ballistic report is ongoing.
He declined to respond to questions about allegations of excessive use of force by police.

One month on, Yassin’s traumatized family say an apology will not bring their son back.
His mother Hadija Abdullahi Hussein told CNN. “Everyone is home but no one is talking, he used to be the one who brought all the life into the house,” Hussein says. 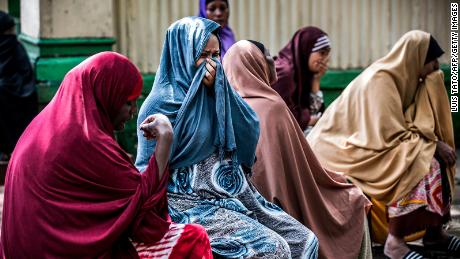 The sight of police patrolling the streets has left her other son, who is three years old, terrified and asking if the police will shoot him too, she says.
Hussein told CNN that moments before the tragic incident, she had told her children, who were on the balcony watching the scenes on the street unfold, not to fear the policemen below.
But after Yassin’s death, she says she’s lost all confidence in the police.
“Can I honestly tell them, policeman are good after policeman killed his brother? I cannot go back and tell them to trust the police.”

Despite a public apology for violent policing by the President , “nothing has changed, people are still being beaten,” said Olal Happy, a convener at the Social Justice Working Group which coordinates social justice centers in informal settlements like the one Yassin lived in.
He classifies what Kenya has seen during curfew as human rights violations. “More people have been killed by the police than Covid-19,” Happy said, “Most people don’t fear the virus like they fear the police.”
As Kenyans settle into the reality of curfew for the forseeable future, Happy says life is about to get even tougher for poorer Kenyans.
“People living in slums are fighting to survive on many fronts, said Happy. “They’re fighting coronavirus, they’re fighting hunger, and they’re fighting police.”