Wildfire scorches 1,200 acres of Everglades; will there be more if coronavirus restrictions lift? 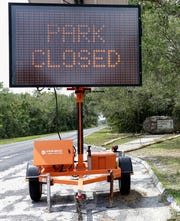 PALM BEACH, Fla. — A wildfire fire sparked by mistake and fed by drought burned more than 1,200 acres in South Florida’s Everglades and continues to smolder despite pockets of drenching rain over the weekend.

The so-called Sunday Afternoon fire that has seared sawgrass prairie, melaleuca and Australian Pine in Everglades National Park began April 19 and was 70 percent contained as of Monday.

Fires on adjacent state-owned land were mostly extinguished, but concerns are mounting that relaxed coronavirus orders could mean more unintended ignitions with 65 percent of the state in moderate to severe drought.

“Now that things are beginning to open up a little bit, people will probably start going out and there’s a greater chance of something happening that could start a fire,” said Scott Peterich, a Florida Forest Service wildfire mitigation specialist in Palm Beach County. “It’s been so dry, but all the parks are closed so you didn’t have anyone in them.”

More: US reopening: Which states have relaxed restrictions? Find out what your state is doing

There were 26 active wildfires on state land Monday.

The cause of the Sunday Afternoon fire is still under investigation, but “human influence is likely,” according to a press release from Everglades National Park.

A fire watch was issued Monday for areas of Hendry, Collier and Monroe counties triggered by the parched ground, plummeting relative humidity levels and northerly winds. The fire watch could be continued into Tuesday.

“The drier air and lower relative humidity leads to elevated fire weather because it’s helping further dry out those fuels,” said meteorologist Larry Kelly. “It all depends on where the rain falls.”

March was the driest on record for the 16-county region managed by the South Florida Water Management District. This month, an average of about 1.5 inches of rain has fallen through Friday, which is 73 percent of what’s normal for that time period. Sunday’s rains will undoubtedly hike that for some areas.

Fire behavior on the Sunday Afternoon Fire in Everglades National Park has significantly diminished. Firefighters will continue to monitor this area until substantial rainfall extinguishes the remaining hot spots.https://t.co/e91m5CM4jI

The spot where the Sunday Afternoon fire spread west of Miami and south of the Tamiami Trail has been so dry that water has drained to below ground level. Historically water would have remained above or at the surface to sustain an ecosystem that evolved before flood control efforts diverted water from its natural southerly flow out of Lake Okeechobee.

Scientists at the water management district and Everglades Foundation have warned the dry conditions could mean the loss of centuries-old peat soil — a building block for life in the Everglades — to either fire or desiccation.

“The Everglades is known for having a corrugated landscape and when you dry out the marshes, they flatten out and you lose habitat,” said Everglades Foundation ecologist and Communications Director Steve Davis in an interview earlier this month. “It’s times like these that really illustrate the need for Everglades restoration.”

A planned reservoir south of Lake Okeechobee will hold water that could be used to rehydrate the Everglades during unusually dry periods. The reservoir is scheduled to be completed in 2028.

To help fight the Sunday Afternoon fire, the water management district modified the water flow in that area by installing five temporary pumps to pull water from a nearby canal and put it in Everglades National Park.

“As people go out and about, we are just asking that they please exercise caution,” Peterich said. 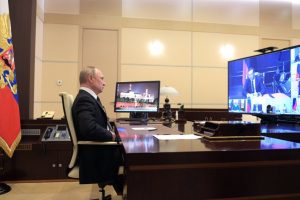