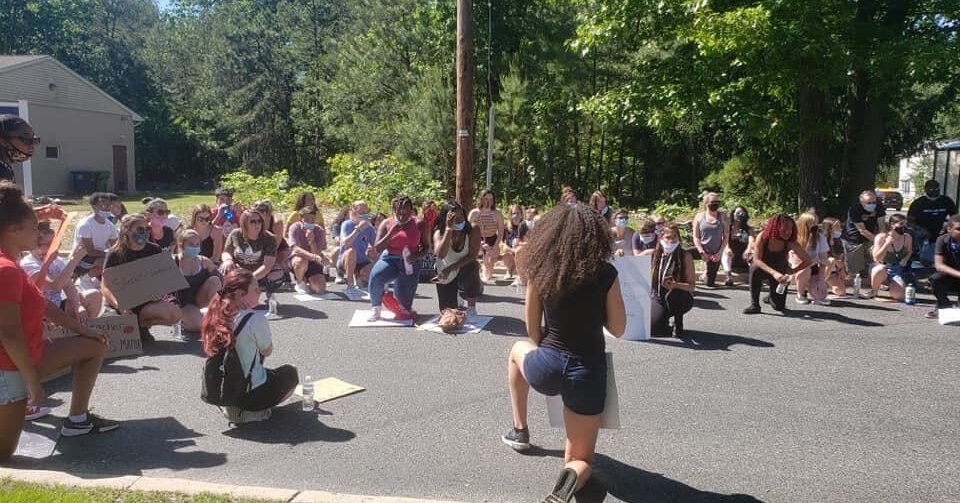 The protest in the New Jersey township was similar to those that have unfolded across the United States since George Floyd was killed in police custody: About 70 people gathered to rally against police brutality and systemic racism.

But as the diverse group marched along Monday, waving signs and chanting slogans in support of the Black Lives Matter movement, it was met by several white men who had gathered near a sign that said “All Lives Matter” and in front of a pickup truck draped with an American flag and a pro-Trump sign.

One of the men yelled at the marchers angrily while kneeling on the neck of another who was facedown on the ground — an apparent attempt to mock the killing of Mr. Floyd, a black man who died in Minneapolis after a white officer knelt on his neck for nearly nine minutes.

Condemnation of the scene, which was captured on video, came quickly. The mayor and the police chief in Franklin Township, the South Jersey community where it happened, issued a statement calling the episode “revolting” and saying that it had left them “appalled and saddened.”

On Tuesday, the state’s Department of Corrections said it had suspended one of its employees after confirming that he was among the group that taunted and tried to upset the protesters. One man in the group can be seen on video filming the protesters.

“We have been made aware that one of our officers from Bayside State Prison participated in the filming of a hateful and disappointing video that mocked the killing of George Floyd,” the Corrections Department said in a statement that also pledged “a thorough and expedited investigation.”

The department did not identify the officer, but officials said he was a senior corrections police officer who joined the Corrections Department in March 2002 and worked at a youth detention facility in Bordentown until January 2019, when he moved to the Bayside prison in Leesburg.

“We won’t let the actions of a few distract from our progress toward dismantling systemic racism,” Mr. Murphy said in a statement.

The union that represents New Jersey’s 6,000 corrections officers, PBA Local 105, said in a statement that under “no circumstance do we condone nor will we ever tolerate actions and expressions of discrimination, harassment and hatred” of the sort engaged in by the counterprotesters.

Late Tuesday, FedEx confirmed that one of its employees had also taken part in the counterprotest and had been fired as a result.

“We do not tolerate the kind of appalling and offensive behavior depicted in this video,” the company said in a statement.

Daryan Fennal, who organized the protest, said that it had started at the local community center at around 3 p.m. and that protesters had then marched more than two miles to police headquarters.

There, Ms. Fennal said, the group knelt for 8 minutes and 46 seconds — the length of time the white officer had his knee on Mr. Floyd’s neck — and then had a discussion.

It was on the way back to the community center, where many of the protest participants had parked their cars, that the group encountered the counterprotesters, Ms. Fennal, 21, said.

“I was crying, immediately,” she said. “I was thinking about the kids who were marching behind me. That’s not something easily unseen.”

In addition to mocking Mr. Floyd’s death, she said, the men on the side of the road had yelled, “If George Floyd would have complied he wouldn’t be dead”; “Go cash your checks”; “Start running”; and “Black Lives Matter to no one” as the group passed.

Ms. Fennal — whose mother is white and whose father, now deceased, was black — said the expressions of hatred had not diminished her passion, or that of others, to continue protesting against injustice.

“There are more people who are encouraged, even more so, to stand up and march alongside us and help black people who are facing systematic racism,” she said.

Another protest is scheduled in Franklin Township on Saturday. 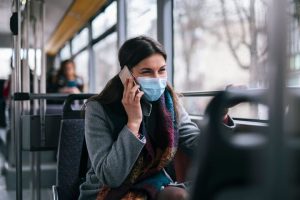 Anxious About Lockdown Ending? Here’s Why And How To Cope. 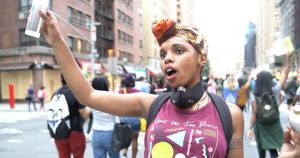 Profile of a protester: Genesis Hart 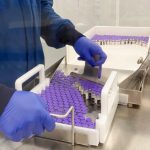 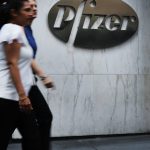