Report: Even Source Inside Cuomo's Office Convinced He's Going to Be Kicked Out — And She's Not Sorry

New York Democrat Gov. Andrew Cuomo is fighting to remain in office because he has little left if he’s drummed out of politics after a report by New York’s attorney general maintained allegations of sexual harassment or abuse by 11 women could be credibly supported.

According to Vanity Fair, Cuomo biographer Michael Shnayerson describes a man who, from a young age, was totally engrossed in the art of getting elected, starting with the political career of his father, Mario Cuomo.

He was also totally engrossed in the art of dirty politics. The posters that young Andrew Cuomo festooned those highway overpasses with allegedly involved an infamous slogan used by dirtier elements in Mario Cuomo’s camp to exploit rumors regarding Koch’s sexuality: “Vote for Cuomo, Not the Homo,” the purported signs read. (Andrew Cuomo denies this; while mere allegations should never be enough to nail somebody to a tree, it’s worth noting that, in August of 2021, an Andrew Cuomo denial and $8.99 will get you one month of Netflix basic.)

And he was engrossed in little else. Cuomo was once married to Kerry Kennedy (of those Kennedys, for those who missed the nuptials), but he wasn’t quite the family guy even before there were allegations of spousal abuse during the breakup. “He hadn’t done the modest things she had asked of him as the father of their daughters: visiting their schools, for one; reading a book on parenting, for another,” Shnayerson wrote.

One Kennedy sibling said Cuomo didn’t enjoy “anything without a clear benefit to his career.” Falling back on family connections, in other words, probably isn’t going to be an option for the embattled governor.

So, it’s time to dig in and hunker down into the trenches. Cuomo’s the general calling the shots — and the opposition is not only firing on him from all sides but has no shortage of ammunition. He needs his best men and women (although there may be a shortage of the latter) down there with him, ready to fight this one out to the death.

Or, in the case of one member of Cuomo’s executive chamber who talked to the Daily Caller News Foundation, willing to ride out the fire until the commanding officer gets taken out or resigns.

In an interview with the Daily Caller News Foundation, a source within Cuomo’s executive chamber said she’s entirely certain he’ll leave one way or another — and that she’d be gone if she weren’t sure her boss was going to be.

“If I weren’t as sure as I am that he will be impeached, I would leave,” she said, according to a report published Saturday.

“And if he doesn’t get impeached for some reason, I will leave. Honestly, the press team here is comprised of amazing people, but working for a man like that is against everything I believe in and I believe the women who have come forward.”

The source “detailed a culture of anger and frustration in Cuomo’s office as employees attempt to serve the state of New York amid the chaos of the #MeToo allegations. She repeatedly praised her colleagues, including senior adviser Richard Azzopardi, describing him as a dedicated servant of New York with significant loyalties to the executive chamber.”

“I want people to know that what goes on at the chamber isn’t just the governor,” she told the DCNF.

“There’s a whole team of people in this limbo right now that are good people that can’t do their jobs because of what’s going on. And it’s immensely frustrating as someone who loves this state as much as I do.”

For the uninitiated, Azzopardi is the director of communications and senior adviser to the governor.

His last tweet was on Friday, bashing a New York Post editor who attacked Richard Azzopardi and top Cuomo aide Melissa DeRosa for their manner toward unfriendly Post reporters.

“Your high horse is two inches high,” Azzopardi tweeted to the editor.

I understand he’s supposed to be a nice guy, per the DCNF source, but that doesn’t sound like he’s out to make friends.

The staffer who spoke to DCNF noted that while she hadn’t seen any of the alleged behavior detailed in New York Attorney General Letitia James’ report firsthand, or any other inappropriate behavior, said she had “no reason to distrust the accusers and believes their allegations,” the report stated.

“We’re just sitting here watching this,” she continued. “It’s like having to be a minor part of it. And it just feels incredibly selfish.

“At this point, the state can’t function with this spotlight on it. It needs to clear itself up, be it with a resignation or an impeachment.”

She also made it clear that she’s not the only one.

“I’ve spoken to a couple of my colleagues today and I guess the general consensus is just anger,” she said. “We just feel angry, disrespected. I know there’s a lot of back and forth between wanting the impeachment probe to go further, to learn more and automatically believing. But even those who are on the fence are just mad.”

Cuomo took a political mental health day on Wednesday after the report came out. That extended to the rest of the week, with the New York Post reporting he was spending time “with his best — and maybe only — friend left in Albany.”

“The governor, who is facing accusations he sexually harassed current and former workers, was spotted outside the Executive Mansion with his dog Captain.”

Too bad Kerry Kennedy isn’t around to give Cuomo a paw-renting book on how to deal with Captain. Seems like he’s going to need it, since even the people sticking around him are just there to find out who the next boss is going to be.

One only wishes Ed Koch were still alive. 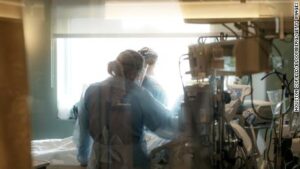 6 members of a Florida church died of Covid-19 in 2 weeks, pastor says. On Sunday the church held a vaccination clinic