Raiders owner Mark Davis described Jon Gruden as contrite and remorseful over language he used in emails that ultimately led to his resignation on Oct. 11 as the team’s coach.

Davis said Wednesday he has communicated with Gruden, who stepped down after emails he had written using racist, homophobic and misogynistic language surfaced in connection with an investigation into workplace misconduct with the Washington Football Team.

“He’s hurt, he’s really hurt,” Davis said when asked to describe the conversations. “And I understand that, but he understands the ramifications of what he said. We all have demons in our lives. You have to understand that, and you have to look at redemption as well.”

Asked if Gruden is remorseful over the emails that led to his ouster, Davis said, “He is, absolutely.”

Davis said he does not harbor any ill will toward Gruden or his family in the wake of his resignation.

“His family — [Gruden’s son] Deuce is still the strength coach of the Raiders,” Davis said. “I love the family of Jon.”

Davis expressed frustration over the timing of the release of the emails that led to Gruden’s resignation. He only received word of a racist email Gruden had written to former WFT president Bruce Allen, in which Gruden mocked NFL Players Association executive director DeMaurice Smith’s physical appearance, four days before the Raiders were to play the Bears on Oct. 10. Davis was informed the next day there were other emails using homophobic and misogynistic language.

He didn’t immediately ask for Gruden’s resignation because he wanted to use “due diligence” to address the situation.

Davis expressed frustration at not hearing about the emails sooner and blamed the NFL for not providing the information.

“The fact that they may have known about it a couple months before and they didn’t let us know about that [was disappointing],” he said. “I believe that if we’d gotten the information in the summer, when [the NFL] learned about it, it would have been a lot easier for everyone involved. It is disappointing, the whole thing with Jon. It’s just life.”

Davis said he would like to see the league provide a written report of the WFT investigation into workplace misconduct. Commissioner Roger Goodell said league-appointed attorney Beth Wilkinson provided a summary of her investigation to owners, but there was only an oral report and not a written one.

“I think there should be [a written report], especially with some of the things that were charged,” Davis said. “I think people deserve it, especially the people that were victims.”

Goodell gave no indication during his news briefing on Tuesday that there would be a written report, and Jerry Jones of the Dallas Cowboys said there was agreement among the owners that the league’s actions were appropriate. The WFT was fined a record $10 million, and team owner Daniel Snyder has been removed from day-to-day operation of the team. His wife, Tanya, is overseeing all team business, while Daniel Snyder concentrates on efforts to get a new stadium built.

“We’re all very sensitive to the workplace,” Jones said of the investigation, “and certainly approve of the way the league handled it.”

Bob Glauber has covered the NFL since 1985 and has been Newsday’s NFL columnist since 1992. Twice selected as the New York State Sportswriter of the Year by the National Sports Media Association, he is president of the Pro Football Writers of America and author of “Guts and Genius.” 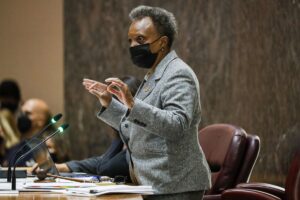