The Orange County Health Agency reported on Tuesday its highest number of daily deaths related to COVID-19 in more than a month.

The health department reported 15 deaths, a count tallied once before on June 24, bringing the coronavirus death toll in the county to 581. Five of the individuals who died lived in skilled nursing facilities, which account for 253 of the county’s deaths.

The county also reported an additional 187 coronavirus cases, bringing the total number of infections to more than 34,800.

There are currently 640 people hospitalized for the virus, including 203 in intensive care. The number of hospitalizations hit 600 at the start of July and climbed above 700 mid-month before declining over the past week.

The county’s seven-day positivity rate, or the average number of positive test results among all those tested in that period, currently stands at 11.1%. That number falls above the state’s safety threshold for COVID-19 guidelines but is lower than what has previously been reported. The state is monitoring Orange County, as well as more than 30 other counties, including Los Angeles, for a surge in cases and the virus’s rate of transmission.

The county accounts for the second-highest number of cases in the state. L.A. County, the state’s most populous, continues to account for the bulk of infections in California, with more than 176,100 cases. But recently, the epicenter has shifted to the Central Valley, where eight counties have been ravaged by the virus in recent weeks.

On Monday, Gov. Gavin Newsom said he asked the California Legislature to approve $52 million to expand testing, tracing and isolation protocols in the affected region where the virus has disproportionately affected Latino communities. That’s also the case throughout the state, including L.A. County, where Black and Latino populations have been more impacted by the virus than other groups.

In an effort to better serve those communities, California Health and Human Services Secretary Mark Ghaly said Tuesday that labs and providers that collect coronavirus tests will be asked to retrieve information on race and ethnicity — a practice that is standard in L.A. County but is not a set statewide protocol.

“About a third of our cases that are reported to California Department of Public Health don’t come with race and ethnicity data. We need that to improve so that we have a better sense of where transmission is happening, which communities are impacted,” Ghaly said. “We know early on that roughly … 47% of our COVID cases were among Latino populations. Today that number is closer to 56%, which represents a significant increase of the total impact on the Latino population.” 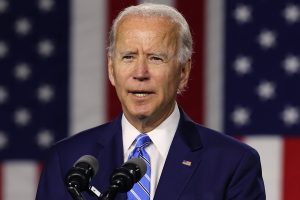 Biden says he hasn’t been tested for coronavirus