Officer Down: Del Rio Sector Border Patrol agent killed. He was a husband. A father of four. A patriot.

Following a procession for a Border Patrol agent who passed away in a vehicular crash earlier this month, sources say his remains are on their way back home to El Paso where he’ll finally be laid to rest.

I am deeply saddened to inform you of the off duty death of Border Patrol Agent Fernando Morales. He is survived by his wife and four children. On behalf of our sector family, I extend my deepest condolences to his family, friends and colleagues as we mourn his passing. pic.twitter.com/Hwq7ih5ISj

On July 6th, 51-year-old Fernando Morales was believed to be headed into work when his vehicle collided with a tractor-trailer on the road.

“Comstock agents, with our law enforcement partners, paid tribute to the procession for Agent Morales as it passed through the Comstock Checkpoint en route to El Paso. Our Del Rio Sector family offers its deepest gratitude for the faithful service of Agent Morales and his family.”

Comstock agents, with our law enforcement partners, paid tribute to the procession for Agent Morales as it passed through the Comstock Checkpoint en route to El Paso. Our Del Rio Sector family offers its deepest gratitude for the faithful service of Agent Morales and his family. pic.twitter.com/d0Lcsd2Bkk

Agent Morales is survived by his wife and four children. We at Law Enforcement Today would like to extend our condolences to the family of this man who aimed to keep our country safe and secure.

In Bothell, Washington, the Bothell Police Department recently revealed the identity of the police officer that was killed in the line of duty on July 13th.

In a press release, the department said:

“Officer Jonathan Shoop was shot while attempting to stop a violator vehicle on July 13th at around 9:40 PM. Officer Shoop died from his wounds at the scene.”

It is with a very heavy heart that we identify our fallen officer. pic.twitter.com/wbnrlI6dLl

“Jonathan Shoop started his law enforcement career at the Bothell Police Department on June 3rd, 2019 after serving in the United States Coast Guard. Jonathan was a dedicated officer who served the City of Bothell with professionalism and compassion. Jonathan was well liked amongst his peers and throughout the community. Officer Jonathan Shoop will be dearly missed.

“Officer Shoop is survived by his fiancé, his mother, and his two brothers.”

@BothellPolice, our thoughts and prayers are with you this morning. Our hearts are broken at hearing the news of the death of one of your officers and the injury of another.

Sending our most sincere condolences to you and the families of the officers. 💙💙#bp176 pic.twitter.com/mUUSDfLsct

“A growing memorial for the Bothell officer shot and killed by a suspect last night. Many people in Bothell tell me they want @BothellPolice to know they care – deeply. And say their hearts are broken by this loss.”

A growing memorial for the Bothell officer shot and killed by a suspect last night.

Many people in Bothell tell me they want @BothellPolice to know they care – deeply. And say their hearts are broken by this loss. @KIRO7Seattle pic.twitter.com/IeYemh4P1W

Many showed up to add flowers and signs to a memorial for Officer Shoop on his patrol vehicle.

The second officer shot during the incident has not been identified, but he was reportedly released from the hospital in satisfactory condition.

“Our hearts are broken. Yesterday, July 13 marks a tragic day in Bothell’s history.  Police Officer Jonathan Shoop was shot and killed in the line of duty.  A second Police Officer was also shot but was not seriously wounded and has been released from the hospital.

“On behalf of the entire Bothell City Council, we send our thoughts and prayers to Officer Shoop’s family and want our Bothell Police Department to know we grieve with you.  You have our unwavering support during this incredibly difficult time.

“The City’s current focus is on supporting our fallen officer’s family and ensuring our police department has the counseling, mental well-being resources and peer support they need.

“The past few months have been unprecedented and difficult for first responders and now to lose one of our own is a horrific incident to comprehend.  We are all so proud of the Bothell Police Officers who worked through the night, along with several of our neighboring agencies, to professionally and competently take the suspect into custody, protecting the community from further harm.

“We are incredibly grateful for the surrounding law enforcement agencies who are assisting us now with call coverage and law enforcement support, so that services in our community are covered.

“Thank you to the Snohomish County Multiple Agency Response Team, who stepped in immediately to investigate this shooting incident.  When something like this happens, it is important for us to have a complete and thorough investigation. This external and independent investigation is vital for our community and department.

“Our amazing community has already been reaching out wanting to know how they can help.  Once we determine the family’s desires or wishes, we will share any pertinent information with our community.  Follow Bothell Police and City of Bothell social media channels for the most current updates.

“This is a traumatic event that has befallen our Police Department and our entire community.  Together we will begin the healing process.  As Mayor, I am so thankful to be part of such a compassionate and caring community.” 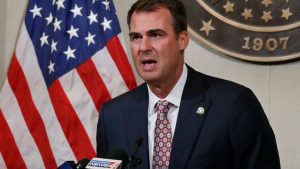 Oklahoma's governor says he has tested positive for COVID-19