‘If we put our hands on the criminal, we are going to jail…’

The decision to leave the DA office came just hours after Manhattan District Attorney Cyrus Vance Jr. announced his office would not be pursuing charges against the protesters who looted businesses and attacked NYPD officers.

Now, the officers originally assigned to Vance’s office will help with crowd control elsewhere in the city, according to the New York Times.

New York City Police Commissioner Dermot Shea denied that the move was directly related to Vance’s announcement, but it’s been clear for weeks that tensions are high between city officials and the NYPD.

Last week, city prosecutors came out in support of legislation that would forbid police officers from using choke-holds. The unions representing NYPD officers immediately slammed the legislation as an attempt to “vilify” officers who are just trying to do their jobs.

“If we put our hands on the criminal, we are going to jail,” Pat Lynch, president of the Police Benevolent Association, said of the legislation. “I am not being dramatic. That’s how bad it is. No one has read the bills.”

The decision not to prosecute protesters is just the latest example of the city trying to undermine its law enforcement, said Edward Mullins, president of the Sergeants Benevolent Association.

More than 400 NYPD officers have been injured by protesters over the past few weeks, according to NBC New York, but the city doesn’t seem to care, he explained.

“It is a dereliction of duty to their oath of office,” Mullins said in a statement. “More important than undercutting the work of the NYPD, it is undercutting public safety.”

Shea, however, argued that city prosecutors and police officers aren’t at odds.

“Are we always in lock step? No,” he told the Times. “We’re human beings and from different agencies.”

Many NYPD officers feel differently and have even begun to leave the department.

“Honestly, we feel alone out there,” Mullins said. “You go out and spend 17 hours on this day, and then you check your phone, and you have certain members of Congress, the governor, the mayor, and they’re saying that we’re not doing a good job.” 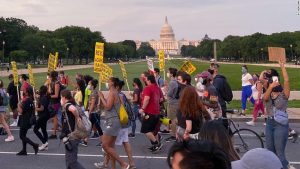