SODO, WA — While most people look forward to enjoying and celebrating Labor Day with family and friends, about 200 so-called “peaceful protesters” chose instead to block police officers riding their bikes outside the Seattle Police Officers Guild (SPOG) headquarters.

Perhaps because “music soothes the savage beast,” the funky 2004 pop country hit “Save a Horse (Ride a Cowboy)” was heard from the headquarters’ speakers as officers tried to ride their bikes on the road that was blocked by the protesters.

Despite the weather being clear and sunny, protesters brought umbrellas and refused to step aside when officers rode toward them.

As you may have seen, at 6:21 a large group of cops bullrushed protesters outside SPOG HQ. They split the group, made arrests, deployed blast balls, pepper spray. Cops continued rushing crowds from SODO all the way now to Rainier and Dearborn. pic.twitter.com/st6YSbH33m

With protesters obstructing the public roadway, police eventually broke through the line and took away their cosplay shields and umbrellas and ordered them to disperse the area.

One protester set off a fire extinguisher and others “threw rocks, water bottles, fireworks, and the occasional road cone,” according to Rich Smith, who was documenting the situation.

One protester grabbed a female police officer and knocked her down while she was trying to arrest another protester.

When Seattle officers attempt to make arrests, Antifa and other agitators try to intervene and prevent it. Tonight, outside the Seattle Police Officers Guild offic, a black bloc agitator assaults an officer while she’s attempting an arrest. pic.twitter.com/eAlFC9m2YM

Police also found Molotov cocktails outside building headquarters and had a live one tossed at them while on the road.

Colby Williams, a member of the Black Indigenous Coalition, said he was standing on frontlines when officers quickly rushed in before the protesters could damage anything:

“At that point, nobody had damaged the building or spray-painted it. This was a peaceful march; no property was damaged on the way to SPOG or on the way back.

“We actually had some people picking up garbage as we marched.”

It was not clear what Williams’ definition of “garbage” was.

However, on Sept. 1 the police department had posted pictures of some of the “peaceful” weapons that protesters have used against the officers.

As officers successfully broke up the protest line, they began making arrests of those who failed to obey the dispersal order.

“SPD ended up pushing the crowd into the ID and then down Rainier Ave into a green space near Judkins Park, where cops and protesters dispersed.”

Group of about 100+ are marching down 5th Ave in the ID. Sign says, “SPOG is the prob.” Another days “Bezos is a looter.” We got a modest car brigade of 9-10 on the tail, protecting group from vehicular attacks. pic.twitter.com/lY18kHspa1

“Officers recovered intact Molotov cocktails dropped by rioters outside the building as officers began making arrests. Officers arrested a number of individuals on 4th Avenue South as they continued to receive rocks, bottles, and explosives thrown at them by rioters.

“The crowd moved north on 4th Avenue as officers followed. A Molotov cocktail was thrown by someone in the crowd at officers, which exploded on the road. Fortunately there were no injuries as a result.

“Officers followed the large group as they eventually headed east and then south toward Judkins Park. Most of the group broke up at the point.

“An additional five individuals were arrested later in the night at 14th Avenue South and Rainier Avenue South as officers were attempting to impound a vehicle.”

The Public Affairs office also posted videos showing an assault on a police officer and a Molotov cocktail thrown at officers and exploding.

@MalcontentmentT, unfortunately in your hasty escape from @SPOG1952 a few minutes ago, you dropped your #press pass. Since I have it, does this mean that I’m now part of the #Resistance? Should I put it into @SeattlePD evidence? Please advise.#HOLDTHELINE!🇺🇸 pic.twitter.com/aC5kfpCEud

We also reported that in Rochester, New York, “peaceful” protesters set fire to a black-owned business that actually had a sign advertising that fact. Here is the full story.

Riots continued throughout Rochester on the evening of September 5th and transitioned to the early morning hours of the 6th.

And without fail, damage was done by those carrying the banners and chanting the chants of Black Lives Matter. Of those who had their businesses attacked was a local black business owner who had his U-Haul trucks set on fire.

What’s all the more curious in this crime is that posted outside the man’s business was a sign that reads “Proud to be black owned.”

Jesse Barksdale is the owner of J-Ribs, which carried a U-Haul service. He’s reportedly “livid” at the arson committed against his business.

Video footage from the riot showcases one the trucks on fire and reportedly a total of three were destroyed from the fire spreading.

On July 22nd, Barksdale was actually featured in a piecewritten by the Democrat & Chronicle that showcased his unique business model of serving up ribs and U-Haul services in one spot.

According to the article on Barksdale, he ascended from a rough upbringing to being a business owner:

“Jesse grew up in a high-poverty area in northeast Rochester. His aunt raised Jesse and his twin brother, Jerome… His mother died, and his father was not in his life. In 2013, his older brother, Robert, was found hanging in a Monroe County Jail cell and died.”

While having created a unique business model of BBQ and U-Haul rentals, Barksdale was having a tough time due to the pandemic. When COVID began impacting his bottom line in March, he was distraught and stated:

“This can’t be happening to me. It’s one thing if you know what you did to drive your customers away.”

But now, he lost three of his trucks due to the rioters.

According to Barksdale, at least one person has been arrested in connection with the arson.

During the riot that took place, there were an estimated 1,500 people present in Rochester. Reports of fireworks shot at officers and rocks being thrown were also among the obvious arson that took place.

We’ve previously covered the riots ongoing in Rochester and they have been volatile to say the least. 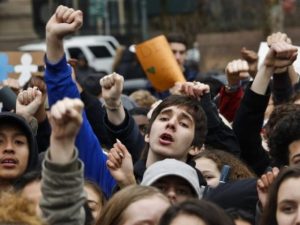