California has recorded more new cases of COVID-19 in the past 48 hours than any other two-day period of the pandemic, after another day of widespread infections detected across the state.

On Tuesday, county health departments combined to report 16,730 new cases of the virus — more than any other day prior to Monday, when the state reported a record 20,000-plus new cases — plus an additional 110 lives lost due to COVID-19, according to data compiled by this news organization.

The average number of new daily cases each day is at an all-time high — 13,338 per day over the past week — and more Californians have perished from COVID-19 in the past week — 519, or an average of about 77 per day — than any other since the end of September. Compared to two weeks ago, California’s average daily case count has soared by 110%, and its daily death toll has increased by 64%.

In another worrisome trend, more Californians are hospitalized with COVID-19 than at any point since Aug. 6, and the state added more new patients in the past 24 hours than any previous day of the pandemic, according to the latest data from the California Department of Public Health. Total active hospitalizations had increased by 385 — 7% in a single day — to 5,844, as of Monday — a 90% increase in patients from two weeks ago.

On Tuesday, Los Angeles County passed Kings County, New York — where Brooklyn is located — for the highest cumulative death toll of the pandemic, according to Johns Hopkins University. The county recorded its highest daily death toll since September — 51 — to bring its overall total to 7,497, atop the morbid leaderboard.

The Bay Area on Tuesday recorded more than 2,000 new cases for the first time in a single day, including 500 in Santa Clara County, 399 in Contra Costa, 227 in San Mateo and 97 in Napa County — all among each county’s three highest daily totals of the pandemic. Hospitals in the region have added 83% more patients in the past two weeks — just shy of the statewide pace — and now have more active cases than any point since the last week of August, a total of 641 as of Monday, according to state data.

The per-capita infection rate in the Bay Area is lower than the average across California, and new cases are growing slower than the statewide pace. At about 1,381, or about 17.3 daily cases per 100,000 residents, the average daily case count in the region is about 55% higher than it was two weeks ago.

California is testing more than any other point of the pandemic, but a higher percentage of those tests are coming back positive. Labs around the state processed more than 210,000 tests per day, on average, in the past week — 45% more than two weeks ago — with a positivity rate of 5.9%. Two weeks ago, 4.2% of tests returned positive results, while the rate was as low as 2.9% on Oct. 31.

Statewide, there were approximately 33.8 new cases for every 100,000 residents in the past week, with higher rates in parts of the Sierra Nevadas, Southern California and the Central Valley. Over the past two weeks, the highest rates of cases per-capita were recorded in Lassen County, Alpine County, Mono County, Imperial County, Tuolumne County, Sutter County, Kings County and San Bernardino County.

The 2,366 new cases reported in San Bernardino County were second only to Los Angeles County on Tuesday and its second-highest daily total of the pandemic; its daily average reached its highest point yet, about 1,550 per day over the past week, or 71.1 new infections for every 100,000 residents.

The 1,546 new cases in San Diego County were the third-most in the state Tuesday and its highest daily total of the pandemic, topping a previous mark set Saturday. San Diego County reported 140% more cases over the past week than it did two weeks ago, and its daily average climbed to a new high Tuesday, about 1,150 per day over the past week, or 34.4 new infections for every 100,000 residents.

Nationwide, the death toll reached 260,000 on Tuesday, according to Johns Hopkins, and more Americans are currently hospitalized with COVID-19 than any other point of the pandemic, according to the COVID Tracking Project. The active total reached 88,000 Tuesday, a 42% increase in the past two weeks and 85% more patients hospitalized than at the start of November.

Infections also continue to climb nationally, with more than 175,000 Americans testing positive each day, on average, over the past week— 42.5% more than two weeks ago and more than double the average daily cases at the start of November. In total, at least 12.6 million Americans have been infected with COVID-19, or about one in every 26 people in the U.S. 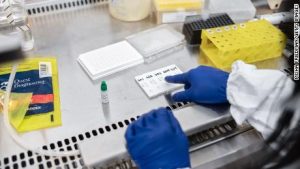