LAKE OSWEGO, OR – Black Lives Matter hit the streets of the Lake Oswego neighborhood on October 25th, doing what they do best: harassing and annoying people that don’t say their beloved phrase.

While, thankfully, the area was spared of violence and property damage – the insufferable antics that often accompanies these kinds of protesters was in full swing that day.

Video that was captured during the demonstration shows some of the nonsense these young “activists” were engaged in, which pretty much was a display of them being generally annoying.

In one instance, you can see both a passerby and then later a woman being pestered to say “black lives matter,” which resulted in continued harassment when the protesters didn’t hear their beloved catch-phrase repeated.

having to say a phrase to pass by without being harassed sounds like something french people had to deal with nazis. everywhere you go ‘heil hitler’ so you dont get harassed or detained.

Honestly, it’s unclear what the purpose of the demonstration was on October 25th, considering there’s really nothing controversial as of late that the area played host to.

In Lake Oswego there have been no recent controversial police shootings, no scandalous bodycam footage incidents, no reports of racially-motivated crimes – these protesters literally just got together to chant “black lives matter” and annoy people in a fairly tame area in Oregon.

Of course, you can’t have a BLM get together without having people from the crowd incoherently screaming at police, accusing them of escorting “racists” because they were tailing a truck hosting a Thin Blue Line flag.

Obviously, police were keeping a close eye on the truck in question to make sure that neither the protesters nor the person driving the truck did anything unlawful, since recent times have shown that the pro-police crowd and the BLM crowd often don’t gel well when in close proximity.

Apparently, the driver of the truck had a previous interaction with these protesters while they were actively blocking the streets as he was driving through the neighborhood.

While the typical insults were hurled toward the vehicle’s driver and passenger, i.e. “racist” and the ilk, things pretty much remained at exchanged words. Ironically, people that were engaging the driver of the truck were remarking on how protesters keep getting hit by cars.

“we keep getting hit by cars”
gee i fucking wonder why

Maybe that’s because there’s a strong correlation between standing in the road and getting hit by vehicles.

I mean, no one would be terribly surprised to hear someone’s hands kept getting burned if they learned that they had a tendency to play patty cake with their stove while it’s turned on.

In another clip from the protest, the group descended upon some random pedestrians with the wheelchair bound protester asking if locals were aware of Lake Oswego’s nickname being “Lake No Negro.”

So the antifa punks really are going into the suburbs to harass people?

The individual being questioned by the wheelchair bound man said he’d never even heard of the nickname/expression before.

Now, as silly as the nickname sounds, some historians claim that because of the areas low black population that the nickname came about.

Now, as to how commonly used that nickname is isn’t clear, considering that the city also has several other nicknames like “Lake Big Ego”, “Fake Oswego” and “Fake Lost Ego” according to Wikipedia.

But in every snippet from the protest that was captured, it was all the same tricks many have come to expect.

Lots of chanting things like “no cops, no KKK” rhetoric while conveniently (or intentionally) walking past police officers, getting upset over Trump flags and seemingly all doing so for the desire to be a public nuisance.

Well im assuming the majority of these protesters don’t live in Lake Oswego. Am I wrong?

So, while nothing genuinely befitting of the term “criminal” transpired in Lake Oswego on October 25th, the protest just didn’t seem to be inspired by anything other than people wanting to live action role play as civil rights proponents in a rich neighborhood.

Of course, the difference between the authentic Civil Rights movement and this Lake Oswego display is that the movement from the 1960s was for the attaining of actual rights – and what went down in Lake Oswego on October 25th was a protest demanding people agree with them.

And if one were to be intellectually honest, chances are the protesters in Lake Oswego weren’t actual residents of Lake Oswego – but guess which city is just 30 minutes away from that part of Oregon?

Speaking of Portland, the city was once again graced by the likes of their local rioters on October 20th attacking police officers.

PORTLAND, OR – Violent protests have been ripping through downtown Portland for over 130 plus nights.

During the most recent riot, anti-law enforcement rioters threw bottles, rocks, and other harmful projectiles at federal agents and called them “Nazi terrorists.”

Journalist Any Ngo tweeted a video of the violence. Protesters can be heard screaming:

“You’re a fucking Nazi, you piece of shit!”

“You’re a f—ing Nazi terrorist!” #Antifa rioters confront federal officers tonight in Portland outside the @ICEgov building. Someone then throws a glass bottle at the officers. #PortlandRiots pic.twitter.com/5GGJIkSlgV

According to reports, federal agents made multiple arrests throughout the night to protect the federal facility. Allegedly in another incident, someone from an upper floor or a nearby hi-rise residence threw a bottle at the agents.

Someone threw a bottle at DHS officers. Streamer says it came from the balcony above. pic.twitter.com/EQYerKtd9f

Fox12 Oregon reporter Marilyn Deutsch tweeted that before the night was over, federal agents arrested at least 13 people.

Following up on @BridgetChavezTV this morning: DHS says officers made 13 arrests and fired pepper balls at protesters. #fox12Oregon #PortlandProtests https://t.co/ceOFNda3HW

In addition to violent protesters throwing harmful objects at officers, a billboard that was advertising a pro-police advertisement was set on fire.

According to reports, demonstrators gathered at Arbor Lodge park on the night of October 20th and proceeded to march to the Portland Police Association (PPA) building.

In a social media post, the group called for the abolition of the police and prison system. At 11:15 p.m., someone started a fire on a billboard next t the building. Police said that the fire damaged the advertisement on the billboard and that the fire appeared to go out on its own.

According to reports, the group left by 12:15 a.m. Officers did not engage with the group and no arrests were made. At least 75 protesters marched toward the PPA with “support vehicles” in tow before the nearby billboard was set on fire.

Police warned those in the area over a loudspeaker to remain on the sidewalk and to be courteous to their neighbors as the nearby streets around the police building were open to vehicular traffic. Some remained on the sidewalks while others used traffic signs to block the street. Some even climbed onto the roofs of businesses in the area.

“Stay off buildings, do not light fires, and remain on the sidewalk. If you engage in criminal activity you could be arrested and subject to use of force to include crowd control agents, impact weapons, and/or tear gas.”

The PPA building has become a frequent target during the 130 plus days of ongoing protests in downtown Portland. Back in September a fire started outside a police precinct on Portland’s north side resulted in almost 15 arrests.

Many of those arrested were from Portland. Others were from San Francisco, Sacramento, Mesa, and two were from Vancouver, Washington. Charges included interfering with an officer, resisting arrest, reckless burning, and possession of a destructive device.

Police said that officers discovered one arrestee was in possession of a glass jar filled with flammable liquid and another had a bottle containing an accelerant and slugging a weapon known as a slung shot.

Another had an electronic control weapon and a baton. Two arrestees had ballistic vests, including one marked with the word “press” with rifle plates.

The day after, hundreds of people gathered for rallies and marches. Molotov cocktails were thrown in the street during one of the marches, sparking a large fire and prompting police to declare a riot. Nearly 59 people were arrested, ranging in age from ages 15 to 50. 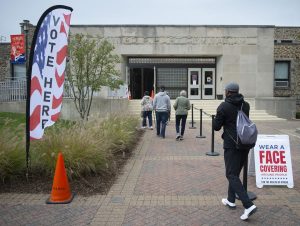 Maryland man arrested for refusing to wear mask while voting 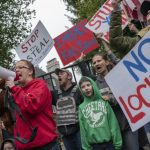 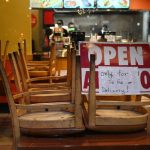 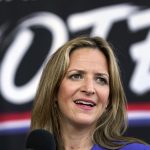 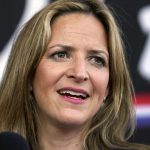