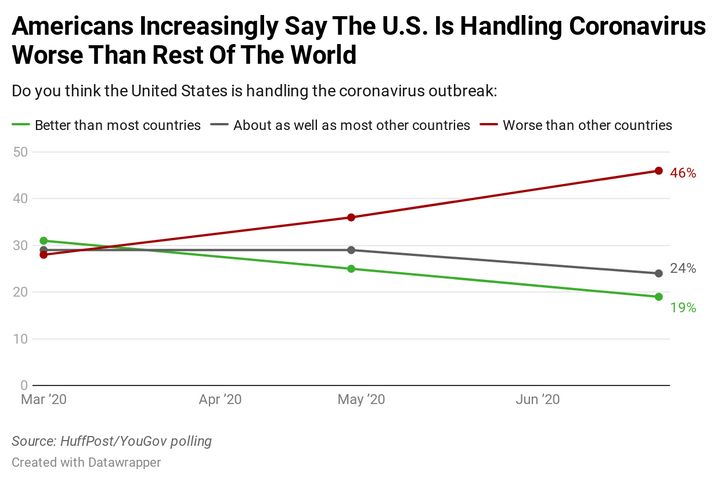 Americans take an increasingly negative view of how their country’s handling of the coronavirus pandemic compares with the rest of the world, a new HuffPost/YouGov survey finds.

The results reflect a continuing decline in confidence over the course of this year. A March poll found that just 28% of Americans thought the U.S. was handling the outbreak worse than other countries, while a May survey put that figure at 36%.

Ariel Edwards-Levy/HuffPost Results of a HuffPost/YouGov poll on Americans’ views of their country’s relative handling of the coronavirus pandemic.

Views of the country’s relative performance are shapely divided along partisan lines, although dissatisfaction has risen on both sides of the aisle. A 71% majority of Democrats say the U.S. is doing especially poorly in its fight against the pandemic, up from 49% who said the same in March. Among Republicans, 19% share that judgment, up from just 2% in March.

Broader views of the United States’ place in the world don’t appear to have undergone a similarly pronounced shift over the past few months. About a quarter of Americans say that the U.S. stands above all other countries, 41% that it’s among the greatest countries, and 23% that there are other countries better than the U.S. ― similar to what the public said in March. The American public also remains rather closely divided on the best approach to international relations, with 41% saying it’s best for the future of the country to be active in world affairs, and 46% saying the country should pay less attention to overseas problems and more to problems at home.

Use the widget below to further explore the results of the HuffPost/YouGov survey, using the menu at the top to select survey questions and the buttons at the bottom to filter the data by subgroups:

The HuffPost/YouGov poll consisted of 1,000 completed interviews conducted July 28-30 among U.S. adults, using a sample selected from YouGov’s opt-in online panel to match the demographics and other characteristics of the adult U.S. population. 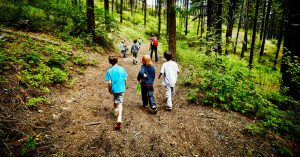 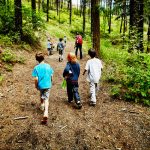 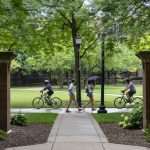 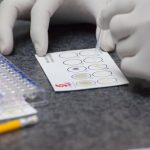