3,000 people put under 'hard lockdown' in Australia with police guards outside 9 tower blocks

About 3,000 people in nine public housing estates in Melbourne, Australia, were put under what the state premier called a “hard lockdown” on Saturday evening, after a spike of cases in the city.

Residents will not be allowed to leave their homes, after Covid-19 cases were discovered in the densely populated blocks. Police have been stationed outside the tower to enforce the order.

At least 23 people across the 9 towers have reported positive for the virus, according to CNN affiliate Nine News.

Everybody in the towers will be tested except those who have already returned a positive result, said Victorian State Premier Daniel Andrews, adding that those who refuse to be tested would be risking an extension to the lockdown.

The lockdown was imposed on Saturday night, giving residents little notice. Abdirahman Ibrahim, a father-of-five, told CNN affiliate SBS he learned about the lockdown on the evening news, giving him no time to stockpile food for his children.

He acknowledged that many residents of the public housing units were in “poor health” and that “this is not going to be a pleasant experience.”

“There has been an enormous amount of work going on right throughout the night to provide food, essentials and support,” Andrews said, listing medical, psychological, drug, alcohol and family violence support services on offer.

But Emma King, CEO of chief executive officer of Victoria Council of Social Services, said the lockdown would “scare many people, and trigger memories of past trauma.”

Some public housing tenants have fled war or family violence. Some are dealing with mental health challenges. Many don’t speak English as their first language. Many others work casual or insecure jobs,” said King.

Victoria has experienced a second wave of coronavirus cases in recent weeks, prompting authorities to impose a fresh lockdown in parts of Melbourne.

Mass testing in the state identified 74 new Coronavirus cases on Saturday, according to Premier Andrews. That figure is down from the 108 cases detected in Victoria on Friday.

There are 43 active cases in Victoria with 26 people in hospital and 3 in intensive care. 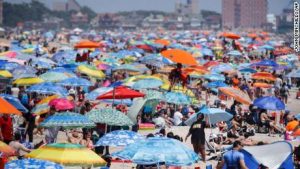